Code Geass: Lelouch of the Rebellion I - Initiation - Reviews 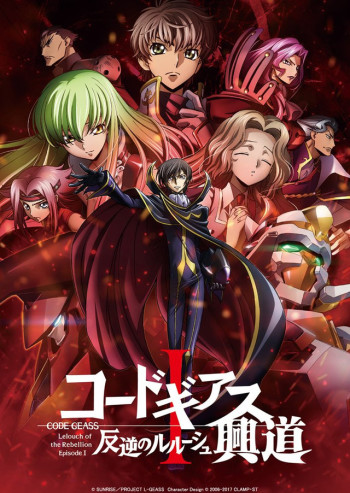 Code Geass was one of the first serious anime I've watched, and naturally I wanted to refresh my memory before the new movie comes out, so this recap (retelling?) seemed like a good option.

Let me start off by saying that while this is a good telling of the story, it naturally feels a little rushed because the story was originally spread throughout half of the season. If you want to watch Code Geass for the first time, I definitely recommend the original series, because you'll have a better overview of the story. Explanation at the beginning is also a nice touch.

And the story is as good as I remember it - some scenes felt harder to watch, especially the ones with civillians dying  because even though some parts of the story felt rushed, this one didn't. Suffering and opression of the people in Area 11 are clearly shown to the viewers and that also helps explain the anti-empire oragnizations and groups. This movie is just an introduction for what's to come, and it sets a really good foundation.

Animation, sadly, wasn't anything special. Quality was perhaps a little better than the original series but in some parts it looked a little derpy. One thing that I noticed is how the art is a little off when it comes to drawing legs, so they look very unproportional and characters have almost spider-like movements. Fighting scenes look decent, again nothing special, but some do look better than others.

Voice acting was spot on, and the OST gives you a real throwback to 2000s anime. It suits the movie quite well, especially in the ending sequence.

Characters don't get enough screen time I felt, some of their actions are a left unexplained and may seem confusing if you're watching this without having seen the original anime. One thing I must add is that I never realized how almost edgy Lelouch is with his speeches and actions, which is probably something I notice now because I'm older. However, his character remains one of the most interesting anime characters of all times perhaps, because of his genius nature and well developed planning skills.

Overall, I feel this is a great movie if you want to refresh your memory before the new one comes out, but if you're new to this story you should definitely start with the anime (as I've said before).

Legendary tales are passed down from generation to generation. The tales of yore were often retold with minor alterations over time for one reason or another. Sometimes it was simply to update it for current times, other times it was merely for not remembering everything. Such stories were enduring for ages despite the very real possibility of being lost to time. Works such as Grendel owe their survival to the acts of translation and retelling. However, this idea is not exclusive to literature and family tales that remained unwritten; films and television series got this treatment as well.

Almost a decade after the saga of Lelouch came to an end, the magnificent bastards over at Studio Sunrise brought the old writing and directing team of Garou Taneguchi, Ichiro Okouchi, and others altogether for a project of retelling and resurrection. A retelling of the original 50 episode series was made as a film trilogy, with this being the first. Admittedly, some may pause at the word “retelling”, asking why not refer to it as recap. Simply put, it is far more, as they made alterations to the script for a new age and for the condensed format. The story of Code Geass has been passed down to a new generation, with the old masters learning from the year since the original’s conclusion, analyzing the original for what best to keep for a trilogy, and adding to it to strengthen the parts they kept and improve on characters in interesting ways with their new take on things. It's a wonder the pacing is as decent as it is.

When it came to lifting visuals from the show, they did nothing to alter it, which sadly means no improvements on the CGI or any of the momentary dips on quality. However, the new scenes were wonderful, recapturing the look and feel of the show with a slightly sleeker look that hardly looks out of place. While the visuals of the show itself could have been polished up for the big screen in places, the plethora of new scenes make up for it in a way due to how faithful and wonderful they look. The mech battles are as fun, well-planned and executed, and acrobatic as ever, and any new clothing featured looks as great as the rest.

Another area the film adds new love to is the music. Code Geass already has a wondrous OST, and this film nor only shuffled around tracks from the episodes being retold and added some fantastic tracks from R2, but the new tracks (whose names cannot be discerned at the moment due to lack of release) not only fit in perfectly, but work as wonderful as the rest. They even added new songs from Hitomi Kuroishi, who sang the more melodic songs of the original such as “Continued Story”, “Stories”, and “Precious Time”. They kept the iconic opening to the TV series, and added a new ED theme that urpasses both of the first season’s EDs, especially the first one. “Aka Dake ga Tarinai” by Iris, is a fantastic track that fits perfectly with the penultimate scene of Todoh’s rescue from episode 20 of the original, with wonderful vocals and lovely chorus sections that blend in magnificently with the tone of the scene proper. It was a wonder hearing the old tracks in new places and the new tracks getting along perfectly. Kotaro Nakagawa and Hitomi Kuroishi, thank you for such wonderful contributions to what is already one of the best OSTs in anime.

Admittedly, the film does carry a few vices from the television show. While not every tone shift in the series was done poorly and abruptly, they clearly only took the bad ones. I still have questions regarding the creation of Zero’s iconic uniform, among other questions. However, the new footage does a lot to expand on things, like give more time for the Black Knights to have fun and do relevant things not shown during battles and other moments in the original; the film even explains how they got their headquarters. From the end of the first scene, we even see relevant relatives of Lelouch as they see him and his sister off. These relatives would be the very sae we know proper in the show, so it was a sweet touch to add to make the idea of them seeing Lelouch again all the more impactful. You can tell they analyzed this story to an extent to see what to add and what to alter. There is even a montage that shows some of the events the Black Knights did in the early parts of their campaign following the final major event they partook in during the film, showing most of what was skipped. As well, some scenes played out differently regarding Villetta and the Japan Liberation Front, in order to suit the runtime, and they work flawlessly.

While regrettably, the scenes of Arthur biting Suzaku and later getting acquainted with him were cut given a role that was played towards R2’s finale, it is nothing worth fretting over much. They even alter a scene of Lelouch and C.C in a way that has her come off as more tender and vulnerable, showcasing a stronger connection between the two at that point than the series did. Not to mention that a variety of the new scenes centered around those two, including a scene of Lelouch playing darts as C.C eats pizza. It’s very clear where the writers are taking this relationship in comparison to before. No other character was altered in any significant way with aside from adding more scenes with Lelouch playing darts and facing hardship over a major reveal about his rival; everyone remains just s good as you remember them. The only exception is a member named Naomi, who actually gets added relevance with her actually doing something like taking down an enemy onscreen and witnessing Zero’s conversation with the head of Kyoto along with more relevant members, Kallen and Ohgi. It may be odd to focus on such a minor character from the original, whose name the series didn’t actually tell us (promo material, merchendise, word of god, etc. told us instead) but the film adds a bit to her and they didn’t need to go out of their way to do so. Nice things aren’t always necessary to do, they’re just thoughtful and sweet and deserve to be acknowledged.

Effectively, this film succeeded splendidly as a retelling of the original 17 episodes (and episode 20, sans 8, 9, most of 12 and 13, and 14-16), while adding meaningful content to really justify the film’s existence, from new tracks to entire scenes that contribute to the characters in some way. The alterations worked wonders as well for this new interpretation of the material. It will be fascinating to see how the next two films of this new version of the story will handle things, and based on the results of this film, I am more than confident that they know what they are doing. As a fan of the original series, most notably the first season, I am more than satisfied with this new take on the legend of a show, and at the end of the day, that was all they needed to do to solidify this film’s existence. Until next time, as always, I bid you adieu.