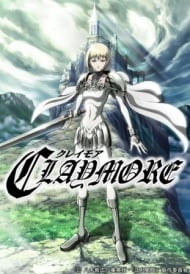 For many years Claymore was promoted as the second Berserk, because it was dark fantasy and we didn’t have much of that back when it was made. The similarities are surface level at best, since down to it Claymore is like Berserk, but with more boobs and less plot. It hardly does much with its potential and it’s average at best. The art was very good as far as aesthetics go. High on detail with lots of filters and dark palette colors to transmit the feeling of a grim world overrun with dread and death. That aside, character designs were unappealing, with weird faces and very similar body types. I had a hard time telling apart the Claymores since they all looked and acted the same. Also common Yoma were drawn too simplistic and human-like and were closer to painted bandits with fangs, which was hardly making them scary. The fight scenes were mostly about the gore than the action choreography, so it wasn’t exciting even back when it was made. Now it’s just plain and boring to look at. It’s extra insulting when you know it was animated by Madhouse, which back then was the king of anime studios. You would at least expect more fluent fighting scenes or creepier monster voices, but nah, despite the popularity of the manga it was based on, they did a rushjob. Most battles didn’t last much and ended in a dull way. There was very little actual animation to the fights as most slashes were nothing but frozen pictures with a silver line that was substituting motion. This was usually followed by excessive amounts of blood, which as cool as they may have been if you were not accustomed to the glorious goreporns of the 80s, they were not rewarding you for the boring build up and the disappointing finishing move. Claymore’s strong point was not its story, which was simple, linear, and just like it happened with the first Full Metal Alchemist, not even a faithful adaptation, since it followed a small part of the manga and then changed the ending it in a way that made a continuation impossible. The premise is about fighting fire with fire and thus the monsters that plague humanity in this series are to be dealt by humans possessing monster abilities. It could have been an exploration around that and how you can keep your humanity despite having to act like a monster, but you hardly get much of that. This is no Parasyte or Devilman Crybaby, or even Tokyo Ghoul. The plot can also be easily divided into short arcs with their own set of monsters, which don’t explore the theme or the setting, as much as they offer some fairly basic characterization. The characters are the selling point, since the monster hunters are a bunch of emotionless super waifus whose worst enemy ends up being their own selves, as they slowly turn to Yoma. We mostly see that through Claire, the main heroine, who moves from a heatless killing machine to a… heatless killing machine than has a will of her own and doesn’t go around killing stuff just because she was ordered to do it. And this is done through her interactions with Raki, an obnoxious idiot who is supposed to be a pacifist and what keeps Claire connected with her humanity, but comes off as a spineless idiot who is nagging, making unrealistic remarks, standing in the way, and generally causing more trouble than helps out. Nobody likes Raki; he’s a party pooper. As for the adversaries, the Yoma, they can hardly be called characters, since to the most part they are just mooks that exist to be killed as generic mini bosses. You will never get something to care about them, much less find out where they come from. They don’t even feel like monsters most of the time, since they come off as cosplaying cannibals with motivations that don’t go beyond ‘kill humans’. I also didn’t like the dialogues, as they are very shonen for the subject matter they are dealing with. They infodump a lot, even during a fight, when they have no reason to say all that shit. All the Claymores want, is to kill Yoma, and by talking needlessly about what they plan to do, they give them a lot of information which can be used against them. And the Yoma talk like hillbillies without some voice alteration for making them sound like the scary monsters they are supposed to be. Also, Raki’s moral speeches are unbearable, as he keeps saying the most out of place things all the time. He is not the voice of reason or the good angel sitting on the right side of the brutal Claymores. He’s completely detached from the reality of the world he is living in, and thus quickly becomes a major mood-killer. So, is there any value in this anime? Aside from nostalgia possibly, no there isn’t. You can easily find shows that do everything better, and don’t have Raki in them. The popularity of the anime was based on a lot of people who were easily impressed by violence and amoral characters, something which is nothing special and keeps repeating to this day every time an edgy anime comes out.

Story Claymore has a unique-ish premise. Yoma roam the world, disguising themselves as humans in order to feast on human guts. The "Organization" has developed half-Yoma, half-humans called claymores to find and kill the Yoma. Claymores can use their Yoma energy to gain power, although if they use to much they will "awaken", losing their humanity and turning into a Yoma themselves. The beginning of the story is fairly dull as it introduces the main characters Clare, a claymore, and Raki, who becomes attached to Clare after she saves him from a Yoma attack that killed his family (the classic "my life is ruined" beginning). After a few episodes, things improve as the story picks up many years ago to explain how Clare became a claymore. The story is good overall, but the series ends kind of awkwardly (the ending is different than the manga, apparently). The main bad dude decides he's tired of fighting, and everyone goes on their merry way. Lame. Characters Claymore does a decent job developing characters. Clare's motivations are well-explained and we see her developing her skills and relationships with other characters. Each claymore has her own unique abilities, and the series makes it a priority to compare different fighters and explain whatever clever techniques are used in battle. The series usually takes some time, through flashbacks or other means, to give you an understanding of each of the major characters. On the other hand, various characters' actions feel crafted to take the story in a particular direction, including Priscilla, Ophelia, and Ilena. One particularly useless character is Raki, whose only function is to prevent Clare from awakening. Enemies, aside from Priscilla, are underdeveloped characters. There are also lots of completely mismatched battles in which a powerful enemy kills bunches of unnamed characters without a problem but takes their sweet time with the protagonists, leaving enough time for them to kill said enemy. Sound Claymore's soundtrack is unremarkable. Lots of generic classical pieces and very 80s sounding synthesized stuff otherwise. The opening and ending themes are okay. Sound effects were good. I sampled the English dub and it was terrible, so watch it subbed. Animation Claymore came out in 2007. This is when anime like Code Geass, Darker than Black, and Gurren Lagann debuted. In comparison to these, while character designs are decent, the animation in Claymore feels very static. Sword slashes are blurs of light drawn over another character, and there's lots of "floating in space" motion of, e.g., detached heads across a painted background. The animation in Claymore looks more like something from the late 90s. It's like a Berserk that's less stylized, which is a shame because Madhouse is capable of great animation, like in Redline or Summer Wars. Even Trigun and Death Note by Madhouse have more fluid animation. Conclusion Despite all of its more technical flaws, Claymore managed to keep my interest like Dragonball Z does - tons of fighting, suspense, likeable characters (mostly), and a plot that doesn't completely fall on its feet. The atmosphere of the series is much darker, however, and there is lots of dismemberment, blood, gore, and other fun stuff (although, this would be more effective if the animation quality was better). The series is willing to pull suprise reversals on you to add some unpredictability, and I generally found myself itching to watch the next episode. Other thoughts There are lots of comparisons to Berserk, which is primarily due to all the bloody fighting and the similar medieval time period, I guess. But Claymore is less refined in its animation and its fights are less tactically clever. I would say if you like Claymore, you'll like Berserk, but if you like Berserk you may feel a bit disappointed with Claymore.