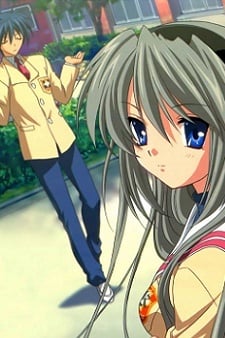 Alright So first off the series in a whole is kinda on the drama side. But don't worry because this series is fairly great! I had my eyes on this for a while before actually watching this great series and was shocked when i started the 24th episode and saw this XD! But when i found out this was a special everything was fine, This one episode is great and has a great blind of hatred, Love and Timeskip added for some spice to it I really enjoyed it!

I can't decide which arc I like better, but you need to watch them both. If you skipped the arcs after watching the original then you are making a grave mistake. I pity they fool who doesn't watch the arcs.

A side story to further push the fact that the original had such little depth and creativity to it.

Writen as an alternate ending to the first Clannad series, this extra episode shows us what happens if Okazaki decided to date Tomoyo, the silver haired junior who is running for student council president.

For the most part the episode is put together as a way to show how Okazaki’s reputation, which really appears to be over blown from what we see, rubs off on all those around him, and now it may ruin Tomoyo’s chances to be student council president. In order to allow her to fulfill her dream of becoming president, and saving the cherry trees around the town, Okazaki breaks up with her, because as usual this “Bad Boy” is actually one of the kindest characters in anime.

In turn, Tomoyo’s success has given Okazaki a little motivation, and he works hard to get a job after graduation instead of being the N.E.E.T. he seemed destine to be.

The only thing more inane than the idea that Okazaki is a bad person is how after Tomoyo wins she goes to a huge conference to talk about these trees, because a newly elected high school president, and the saving of a park full of trees (which tend to be in abundance and celebrated in Japan, so it would be odd they’d be dug up) is a giant event to be televised for all.

Neither of these two sections vary from the show itself, with the only real difference being the characters and locations are whittled down to the bare minimum.

There really isn’t much added to the characters from what we learned in the main story.

Okazaki is again talked about and treated like he’s a kid who is completely awful, but his actions show him to be selfless and willing to give up what he cares about all for the happiness of others.

Tomoyo on the other hand doesn’t bring much to the episode, we’re told she too was a bad apple who moved to the new school and completely changed her ways.

Again we had writers who created a completely off the wall backstory, as a way of creating drama, but which spit in the face of everything else they wrote, which is a big sign of horrible creativity trying to cover it’s flaws with cheap tricks.

While this did add a bit of extra backend to the series, such as the time after Okazaki’s graduation, it was pretty much worthless filler that gives a small “What If,” that has no baring on anything and further pushes the annoying need to make this show more of a dating sim than of an actual anime series, where they now have side quests and alternate endings.

Without the series explaining to me what the characters were all about, Clannad: Another World, Tomoyo Chapter would have been a complete waste of my time. As a stand alone chapter in the series, it doesn't really work. But, it tells the classic tale of a rich girl and lower class boy's love conquering all... which doesn't really work in such a short time.

But, and that's a big one, as someone who loved the series and enjoyed the interaction of these two characters, Clannad: Another World, Tomoyo Chapter has some extra value. Not much, but still some. The story itself sucks, the characters are meaningless unless you already know them, and the setting irrelevant. Still, it's a cute bit of love with a side of selfless stupidity that people call romantic drama.

Oh, don't get me wrong. It's fine. For people who know the Clannad franchise, this is a cute short bit that is a kind of fun "what if". That being said, it isn't nearly as good as the rest of the series.

I don't necessarily like Tomoyo and Tomoya together, but I loved this arc. Again, it's a very overused arc, but the characters brought emotion and a freshness to it that made this one so very good. The ending was perfect and I wanted to cry. Had I any tears left after After Story, I probably would have. I wish these side alternate world arcs were more than just one episode because they both are great. I am a huge fan of Tomoya and Nagisa and prefer them together over any of the other characters, but this is a nice addition to the series and a cool nod to the game.