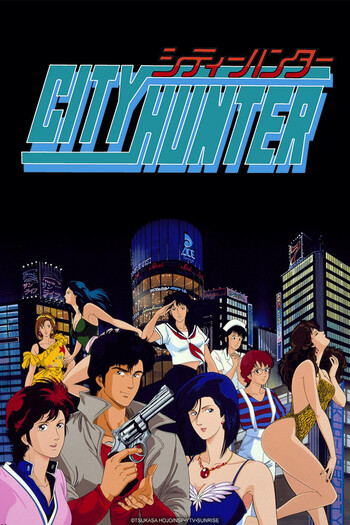 Please note that when reviewing this series, I have thought of it WITHIN its timeframe. So if it seems to be rated highly to you, it is because I am judging it for the time it was made.

Where do you start when you review a milestone series? This is a tough question and one that really comes forth as I review City Hunter.

City Hunter is one of those series that transcend time and generations as the winning combination of drama, action and comedy can be appreciated time and time again. This series has its aspects often copied (Cowboy Bebop being the most obvious one) and even the copies can't go wrong with the winning formula. One who takes a chance on this series will not be disappointed as it has such a broad appeal that it is unlikely to be found lacking (a little like Sailor Moon for the boys).

The animation quality of City Hunter still stands well nowadays because of the high production values this first series of episodes have as a standard. I think it is also clear that no shorcuts were taken when one first lays eyes on some of the breathtaking backgrounds of the Tokyo cityscapes.

The level of detail and mastery in creating these images already elevate this series from generic backgrounds found in more recent shows like InuYasha, Love Hina or Naruto.

The character design is just as pleasing to the eye as these backgrounds. Ryo Saeba looks a lot more like how a person would look then you usual highly stylised Shounen protagonist. The "Mokkori" ladies, including Saeko and Kaori, are also really well drawn and very sexy. With this level of eye candy, there was hardly a chance that it would not be a successful franchise.

The only kink I came accross while watching the episodes was that at times, the proportions on certain character were either strange or just wrong. This occurs very rarely and doesn't really take away from the series so overall it isn't so much of an issue.

This series also comes with a fully kicking soundtrack that even surpasses the great animation. Both intros were incredible pieces of JRock/Pop. GoGo Heaven is probably the better one of the two as it really taps into the action/comedy aspect of the show. The standout track is of course Get Wild (a hit in its own right when released as a single in 1986 and recently reworked by the influencial TM Revolution), one track that taps shamelessly into the drama/romance aspect of the show oh so well!

The voice actors match the quality of the vocal tracks here with completely effervescent and infectious performances. Ryo's voice actors especially has a lot of fun with his character and really draws the audience in!

The overall story of City Hunter is that a sweeper (the kind without a broom) is called upon to either protect persecuted *mostly* females or right wrongs that were done to them in the past (Saint Tail uses the same premise to similar success). As such, this series is easily a very episodic one with a fairly static development all the way through (the only permanent change was the casting of Kaori).

Some people will find this to be a problem as City Hunter does not offer a plot that progresses much through its run. However, the episodic nature of City Hunter allows the audience to catch it sparringly and still enjoy the show just as much.

Later episodes do have storylines that continue for 3 or 4 episodes that have a better connection with its permanent audience and usually delivers very well on that front too.

Because of the episodic nature of the show, character development is lacking overall. However, the main cast is so well defined that they remain just as exciting through the show's entire run. The creators somewhat redeem the lack of development for the main cast by giving us great three dimensional victims/clients who call for Ryo's help. Overall it plays out like Law & Order as the CASE at hand is what is given importance.

City Hunter is easily one of the best Shounen animes ever made (just behind Saint Seiya and Berserk in my books). Its perfect mix of action, comedy and drama does what an anime is meant to do: entertain its audience. It's probably not the most rewarding anime you'll see but it is definitely one that you will forever appreciate. Out of the 51 episodes of this series only 1 was subpar. That is an incredible ratio; especially for a shounen title. Do yourself a favour - see it and enjoy it!

I watched a little over half of this series, and would say, yes, I enjoyed it. The main character is a perverted sharpshooter who takes a job no matter what it entails as long as there's a hot woman involved. His sidechick is always hitting him in the head with a hammer. Beyond this repeitive comedy however, I felt the plots were all episodic and the characters stopped developing after the first few episodes.

I recommend a taste of this anime, maybe not the entire thing - unless you find out you dig it, then watch it all! (I don't know how it ends, it could improve.)