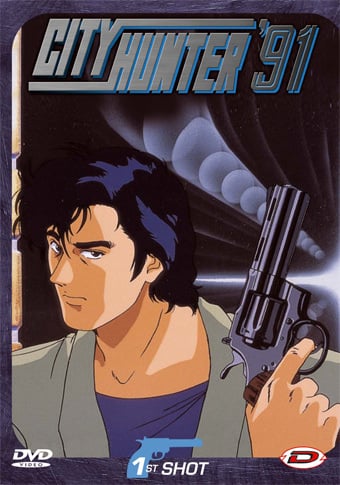 When Hotaru Tachibana storms into a host club to avenge the honor of a wronged female student, the last thing Hotaru expects is to duel the club’s most popular host with airsoft guns instead of fists. When Masamune Matsuoka’s experience wins out over Tachibana’s brawn, he realizes that he can use his victory (and the large bill for damaging the club) to make Tachibana join his struggling Survival Gaming team. However, what ladies’ man Masamune totally misses is that his unwilling new guy… isn’t a guy at all! Under the boy’s clothing and strong need to defend justice, Tachibana is all-girl, but, for a number of complicated reasons, she absolutely CAN’T expose that fact to Masamune or his teammate, the erotic manga artist Toru Yukimura. Blood will boil both on and off the airsoft arena, but it’s not over until the last round is shot in AOHARU X MACHINEGUN!

Ryo Saeba is a sweeper based in Tokyo's Shinjuku Ward, who possesses unrivaled marksmanship and an over-the-top obsession for the opposite sex. He and his partner Kaori Makimura serve as bodyguards and perform other duties for his clients. Their latest client is Ai Shindo, a model who's being attacked by mysterious people and unknowingly holds the key to a vast city-wide conspiracy.

After Jean and Rico finish a mission, Jean and José head off for a short break with Rico and Henrietta. They visit their old home, and Jean reflects on old memories of their younger sister, Enrica, who died in a terrorist attack.

Aoharu x Machinegun: This is a Battlefield for Beasts!

This new survival game has a surprise waiting for Team Gun Gun: all of the participants are forced to compete in full cosplay! It’s a good thing Yuki has them covered.