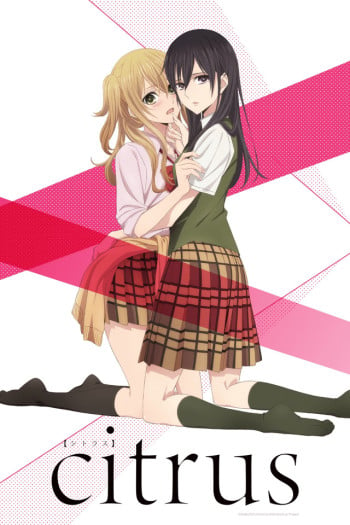 Mei and Yuzu study together at their house so Yuzu can place in the top 100 on their exams and keep their grandfather happy. However, after their kiss of mutual yearning, Yuzu can't concentrate at all. Steeling her resolve she asks Mei what that kiss meant only to get coldly brushed off. Feeling depressed, Yuzu heads to an arcade with Harumi, but her mind's distracted. There, she reunites with her childhood friend, the second year middle schooler, Mizusawa Matsuri.

my love goes on and on

Yuma and Hotaru have been friends since childhood. It is only natural that when Yuma is nervous about her new boyfriend, she asks Hotaru and her boyfriend along for a double date. But when Hotaru offers herself to Yuma as “practice”, both girls realize that they’re more interested in each other than they are in their own boyfriends. With...

Both series are yuri with a blonde haired girl falling in love with a dark haired girl, who has personal issues. NTR is more explicit & has the element of cheating while Citrus is very light with the explicit scenes & only involves girls. Both series goes through the struggles & development of these girls & their feelings for each other. They both have manga that are currently (as of Feb 2018) ongoing. Both manga series is more intricate than the anime, which only got 12 episodes (as of Feb 2018).

Both Citrus and Netsuzou Trap deal with moraly ambiguous characters.

Both series depict forbidden teenage love with somehow offputting or unrelatable characters granted that might be refreshing from the nice guy or cute heroine main characters for some people but I personaly can't see the appeal.

Mei Tachibana has had neither a friend nor a boyfriend in 16 years, and she doesn’t plan on ending that streak any time soon. The outcast learned years ago that social obligations only lead to pain, and has carefully guarded her heart to keep from getting hurt. However, the girl can’t stay withdrawn forever, especially after attracting the...

I'd say they both a have a main character who's going to experience new romantic and sexual things. They both have maturer side of teenage romance which brings a more serious tone to each anime.

Natsuo is a high school boy who is experiencing the crushing despair of unrequited love. To make matters worse, the person he is in love with is his teacher, Hina. In an attempt to lift his spirits, he attends a mixer where he meets a girl named Rui. The two sleep together, expecting never to see one another again, but fate has other plans. His life suddenly...

Citrus and Domestic Girlfriend are pretty much the same anime with one key difference. First the similarities:

Now the key differences with Citrus: