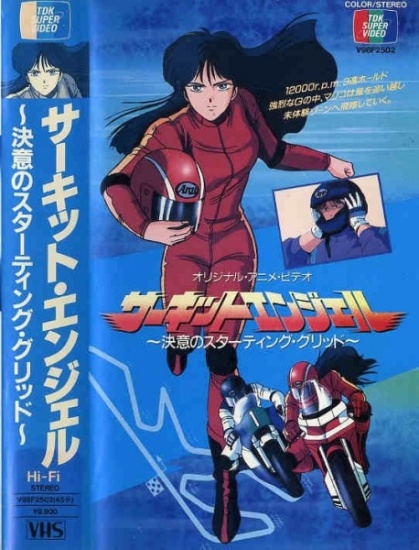 Well... I think is just a case of not being a fan of this particular style of anime.  The story is about a young, female motorcyclist who sets out to settle a score between her and the rich son of a motorcycle manufacturer.  If you like motorcylces, this might be right up your alley!  And if you like anime about race cars or races in general, you also might enjoy this, too.

The animation and the sound are rated a bit higher than the others for pure nostalgia, to be quite honest... Did you grow up watching anime in the 80s or early 90s?  If so, then you'll know exactly what I mean.  It was just so nice to see that hand-drawn anime and hear that cheesy 80s music playing in the background that I couldn't help but smile.

The characters were unbeliveably two-dimensional and not very interesting.  I wasn't really able to connect with the protagonist of the story at all, so her mission for vengenace didn't resonate with me.  I think, even if it's about a topic you're not interested in, a good anime is should be able to draw in the viewer and make them feel something...anything.  But I didn't feel a thing, personally.  I didn't feel like the anime really made an attempt to get the viewer to feel for the characters at all, really.  I felt like a few scenes that were thrown in there for fan service could've been used as character growth experieneces instead, but that's just my opinion.

Overall, I wouldn't really recommend this anime unless you're a motorcycle enthusiast or you're just itching for something from the 80s.  And if it's the latter, I'm sure there are other 80s anime you might enjoy much more.

*I watched this for the Daily Anime Marathon Club.  Check it out!*

Do you like older animation? Do you like 80's as hell soundtracks? Do you like bikes? If you said yes to all three then this show is for you!

Circuit Angel is no Speed Racer, not by a long shot but it's fun, has a likeable protagonist and an asshole antagonist (what more could you want). SO! The story is all about how Mariko severely needs a better father who can take her bike keys away from her and hide them in a better place but instead we focus on how she drives recklessly around on her 250cc motorbike and goes off with her friends who also have bikes.

So they are driving around being nuts on a coastal road and catch the eye of Sho, a rich brat of a multimillionaire motorbike manufacturer, he decides that the best way to introduce himself is to almost make her crash, then send two of his buddies to go to the baths, steal her amulet and accost her while she's nude because antagonist logic!

So her heroic peeping tom friends decide they will chase down those goons to get back her amulet, Sho turns up and makes one of them crash, causing the climax of the OVA to begin, after the training montage of course.

They get through the montage without any injury and go head to head on a racetrack to.. determine who is better and get an amulet back? Okay that's a plot i guess. So they do that and larks are had after they win.

The large picture behind this anime:A racing anime that takes between a girl that has beef with a guy after he acts like a complete douche and takes her charm that was of her and her mother. The beef only gets more chunky as he continues to pick fights with her and her friend. They get into a big rebutal after he tries to run over her friend (I don't know how he thought he would get a way with it) which ends up causing them to get into a race with one another. The story then goes into a bunch of weird flashbacks that don't do anything to further story of the anime and a bunch of unnecessary drama is added into the show since it was already drowning in it. The girl (good guy) ends up beating the guy (obnoxious douche) in the race and the anime ends with her throwing her helmet in the air, nothing else but credits.

This anime is styled in an oldish animation form that some find appealing and enjoyable to watch, however it was nothing spectatular and was rather lack luster personally. The facial expressions were also quite annoying and this anime does contain nudity, you have been warmed if you don't find any appeal to that.

The story was good at the beginning, but quickly became repetitive and rather obvious especially at the ending. The story starts rather abruptly with the main character riding on a bike and never seems to go into much detail about anything that really goes on in the story. The most surprising part about the whole story was how abrupt the ending was without going into any further detail on the story. There were tons of holes that left many questions unanswered throughout the anime and often leaves the watcher(s) completely clueless on a bunch of ideas.

P.S. they also try to add some cheap romance to the story that completely takes up more time.

The music throughout the anime was rather enjoyable to listen to, personally, yet many of the sounds were really old fashioned and out of my taste. The bike sounds were nothing extraordinary and the actual voices were rather expresionless in the sound when speaking with (surprise, remorse and anger (just sounded funny))

Overall, there was no character development at all. The douche was still a douche at the end of the show. The boy desperate to see the girl he liked's tits was still the same except he confessed to her (while she in the bath of course). The girl also didn't change any at all either, she was still rather ignorant but earned some respect for beating the douche. Overall, the whole list of characters was extremely boring to watch or even see. It was a pain to watch.

Circuit Angel is bascially about a high school girl named Mariko that is into bike racing and she's really good at it. She seems like a regular high school girl when she's with her friends, but she's really tough and won't back down from anyone. She gains a rival in Sho, a rich kid that is also really good at bike racing. They have a big race at the end and well you have to watch it. There are other things going on to flesh out the story. For a 45 minute OVA it's good. There is fanservice, but not much. I'm a fan of older anime, so I really liked the 80's hand drawn animation. It may not be for everyone. The animation was good quality, not top notch. Sound was good, I liked the ending song. Characters for a short OVA have decent development. For me this was surprisingly good. If you like action it's here, if you like a little comedy it's here, if you like heartwarming elements it's also here.