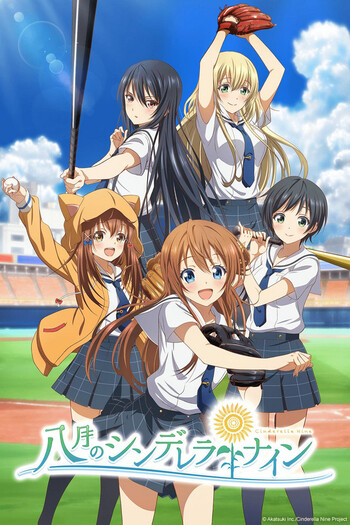 Both are baseball anime about a female team who have to work their way up and grow together as baseball players and friends.

Because they are both a good mood, light-hearted, CGDCT-type sports anime, featuring high school girls' baseball.

Both are based off females coming together to form a baseball team (because there are not enough or no team there) at their schools who tries their best.

Both Anime have a plot where the protagonist is very keen on having a club. Suddenly, when all hope is lost people start joining their club. Anima Yell is like Cinderella Nine since some of the girls even have the same persona

The year is 1925 and Japan is still a country with socially backwards views, particularly on women's rights. One young girl named Akiko Ogasawara decides to fight for equality in her own way - by forming a girls' baseball team! She soon enlists her good friend Koume Suzukawa, and it's now up to the two of them to put together a team of like-minded and spirited young ladies. Under the able and enthusiastic tutelage of English teacher Miss Garland, the girls will need to bond closely, learn well and practice hard if they are to stand their ground against boys' teams and show a misogynistic society exactly what they're made of... while having some fun in the process.

Both are Cute Girls Doing Baseball-related Things shows about a group of HS girls starting 1st ever female baseball team at their school from scratch. Both highlight similar obstacles that the girls have to overcome such as lack of funding, place to practice and etc. Aside from actual baseball both likewise have lots of mellow slice-of-life moments as well as some serious/dramatic scenes (TBG has better animation though).

The story will center around a protagonist who goes to Powerful High School to achieve his dreams of being a baseball player. There, he reunites with a childhood friend named Subaru Hoshii, who he promised to play at the Summer Koshien high school championship game with in the past, but who seems to have forgotten their promise.