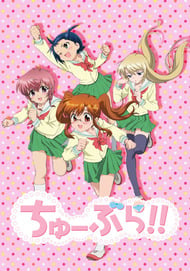 Zexcs’ 2010 anime is quite an unusual show. It is largely, full-on, ecchi but is focussed on a younger age group than you would expect. The core characters are twelve-year-olds starting Japanese middle school. The idea here is to explicitly tell a story of quite young people passing through puberty. The principal character top-of-her-class Nayu Hayama has a step-brother and grandmother who work as lingerie designers - hence she has grown up with a fascination for lady’s under-garments. The trouble is that she is growing up in a world where underwear simply is not something people want to talk about. She has to overcome pressure from both her peers and adults to bring her hobby to a wider audience. Yet her passion is so engaging that she quickly falls in with two close friends Yako Jinguuji and Haruka Shiraishi who agree to help her create an Underwear Club at school. She also has a male academic rival Hiroki Komachi who declares his intention to over-take her as leading student in the year. When Nayu’s initial plans for the Club fail Hiroki steps in to encourage her to create an alternative – an Underwear Appreciation Society. Along the way young Nayu manages to recruit a junior teacher Tamaki Mizuno to help the society and one other new member, aspiring fashion model, Kiyono Amahara. Together they engage in a bunch of activities that you would expect from such clubs: they have meetings, go to the beach, hot-spring baths, summer festivals and do the school culture festival. Through their adventures the audience get to experience all the coming-of-age dilemmas this age group faces. The show veers wildly from frivolous ecchi to semi-serious school-girl issues. It was the first anime in which we have witnessed the explicit mention of menstruation. It isn’t shy to step over normal acceptable boundaries. It explores unusual territory with young people who are too inexperienced and naive to fully appreciate how women’s underwear is deemed to be items of erotica by society. The girls can appreciate lingerie as pretty but fail to see its full adult implication until Kiyono joins the team. Then there is Hiroki who hangs around the girls (for reasons that are not explored) spending most of his time being embarrassed by what they are doing. Through him the girls learnt to appreciate a boy’s perspective. Let’s face it, it is a tender age at which children regard the opposite sex as horrific aliens with whom they have nothing in common. So, is underwear something practical or something to be admired? This is explored from all angles by these young people often with hilarious results. It is hard to quite sum this show up. It is either trivialising a very important topic or attempting to make great importance of a trivial topic. Take your pick. It is not really infotainment nor is it completely mindlessly exploitative. Sure, the focus age group is not one we would associate with up-skirt shots. This style of anime is not one that many outside of Japan would be comfortable with. However, the show does drop a lot of the silly ecchi content later in the twelve-episode season in order to become more focussed on the unfolding drama. It is almost as if the show starts as a vehicle for panty and bra shots before an actual story breaks out and takes over. It is funny. It is charming. It was both enjoyable and entertaining. It does require the audience to be pretty broad-minded and not take it too much at face value. The writing could have been a bit clearer about some aspects but, overall, this was a great show for daring to go places few others tread. It was probably widely misunderstood for this reason.

At first, I didn't know how to start this mini-review. I kept writing a line, promptly deleted it and started anew. I'm mainly writing this small review because I felt that many of the other reviewers expected way too much from a series, which is best watched with certain expectations. Chu-Bra!! is a down-to-earth anime about friendship, young teenagers, a little bit of love and most importantly: underwear. If you start watching this anime with the presumption that it's going to be a deep, plot-filled anime or a nosebleed-starter of dimensions, then you'll be disappoint, son. The show features a lot of different subjects related to puberty: boys witnessing girls maturing, girls wanting to be adults, crushes (the love related ones), taboo-subjects and more from the same drawer. The main theme focus is maturing/puberty and underwear. It has a twist of ecchi humor, but still manages to take a serious approach to the underwear theme. The anime has a relaxed, happy feeling to it. It's an easy, "giggle'ish" watch, so don't expect anything more than that. 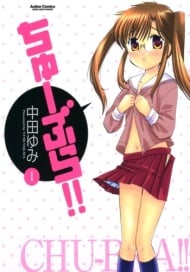