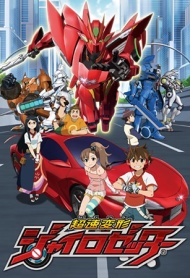 New Yokohama Center is the famed city of the future, promoting widespread use of AI cars and home to Arcadia Academy – a learning institution founded to educate the next generation of AI car specialists.  Kakeru and Rinne used to think they were typical students at Arcadia, until they discovered that the school is actually a façade for a secret defense agency, and what's more, the two of them are fated to become mecha pilots! Now, the duo, along with other friends, must race and battle in transforming cars to put a stop to the evil organization Zenon's plans.

Completely Spoiler Free Review: This review and the scores are in comparison to other Shounen titles and kids shows, not common masterpieces. Keep that in mind before you ask yourself why the high scores and recommendation. Story: 3/5  A bunch of kids are the "chosen drivers" of the Gyrozetters, cars that can transform into mechas, and they have to save the world from the evil organisation Xenon, basically World War 3, which is prophesied on the "Rossetagraphy", and evil corporations. Pretty sure ExxonMobil and other oil companies are the inspiration for that. Inbetween they are doing cute things, have fun and shout about the power of friendship while they fight of the mechas of Xenon once per episode. While all of that sounds super generic, they do occasionally break up the formula with *fresher* ideas. I will not delve further into them here because this is a spoilerfree review after all. ;) In short: The story is the weak point, but there is enough to keep you going. If a convoluted story is your fetish, you will be dissapointed. If cuteness and relaxing Shounen battles are what you get off to, this is perfect for you. Characters: 4/5 The main cast of characters are mainly adorable kids. Although there are quite some amount of tropes involved, they also break them up a bit by shaking up the formula. E.G: The hot-headed protagonist sometimes is sensible, the smart guy gets hot-headed instead and the dopey girl, who gets lost all the time, has the best idea and saves the day. Sounds like nothing much, but its enough to not getting them stale. Character progression equals the bonds they are forming, in this case. The strong points are their cuteness, the relationships and friendship they are forming. The villains on the other hand are well made, likeable and most of them have nice backstories. No "evil for the sake of evil"-BS and no "I'm evil so I have to behave like a dick"-types either. All of them have redeemable character traits that makes them the clear antagonist, yet you sometimes just have to root for them. They are like the less goofy Team Rocket. The character design is top. Each character is distinctive, interesting to look at, sexy or just adorable, without going over the top.  Animation & Style: 4/5 There is a surprisingly high production value, in comparison to other Shounen titles of this time at least. Clear style with bright/vivid colors, strong contrasts and good proportions. Everything as expected as from the experienced bunch from A-1 Pictures.  The highlight are the facial expressions. Each emotion is conveyed convincingly and emphasizes the characters. Or just makes them cuter. BUT you can see where they cut corners to make an extra buck. *Some* still-frames, not that much detailed backgrounds and the CGI-mechas. The CGI.. is not bad, but not good either. The fights are good choreographed, but because of the CGI it loses some of its punch. Unless you hate CGI with a passion you get used to it. I at least have seen way worse examples than this. OP & ED: 4/5 The Opening: There is only one opening song for 51 episodes with two generic videos for it. The song is catchy enough to carry the 51 episodes, though, if you like the style. It's a Shounen song through and trough. It wont annoy you, but it won't blow you away either. The Endings: There are 3 different Endings. All of them involve the Gyrozetters dancing in different choreographies. The first two songs are very generic, but the third one, the festival dance, is very catchy. I skipped the first two and really digged the third one.  All of the songs are typically kids songs. Having fun, friendship ecetera..  Voices: 4/5 The voices are good and are really fitting for each character. I haven't found a single one I was annoyed by. The female voices are strong and not a single case of stereotypical meeky-girl-voice-syndrome, too. There is also enough punch when they shout their battlecries, catchphrases and attacks. Quality control did a good work there. Well, nothing much to rant about here. Fanservice: 2/5 For a kids show there is a surprising amount of boob jokes and skimpy outfits, like really short race queen costumes or even shorter panda costumes to promote a panda. Occasionally really bouncy boobs, too. Don't know how they got the Dead or Alive body physics into this :D They took some serious efforts to make the adult side characters as sexy as possible without touching the border of ecchi-land.And of course there is a beach vacation to show off their swimsuits and even 2(!) Onsen episodes. Enjoyment: 4/5 It's basically a feel-good-show. You can just sit back and enjoy watching the kids bond with each other, having fun and see them fight without needing to worry if one of them will die.  While the story is nothing extraordinary you wonder what the prophesy and "coming war" means and what will cause it. The combination of the episodic elements and the overarching plot is really nice, too. Well paced and a nice mix between the two. All in all: It depends. I enjoy the typical mix of the Shounen genre with Slice of Life elements. And this is a good example of that genre. And I'm a sucker for the "With the passion of our friendship we will win over any foe!" routine. Recommendation:  It really depends on what you expect. If you want a show with high stakes, an emotional rollercoaster or a convoluted story, turn around and look for something else. If you want a change of pace from all the drama, psychological thriller and action series and just want to enjoy watching cute kids doing cute things while fighting in mechas: This is a solid Shounen series just for you to have fun with. My adorable babies of the show: