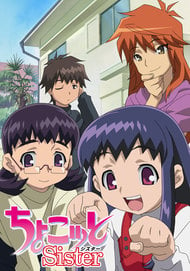 When Haruma Kawagoe was a boy his mother had a miscarriage; and to make up for it, Haruma asked Santa for a little sister at Christmas. Now, years later, Haruma is a college student living away from home. His slumber is disturbed one night by the faint sound of… Santa on a flying motorcycle?! She has come to deliver a present that has taken many years to make: a little sister of his own, a little girl he names Choco. The two of them begin to live together but Choco has a lot to learn, and all of her life skills must come from what her brother tells her and her instruction manual. Choco's life is her brother, but as time goes by she gradually learns to become her own person.

The most retarded sh*t I have ever seen. The story feels like it was written by a drooling imbecile. So incredibly cheesy and cringe. A dude literally gets a little sister as a present from "Santa Claus" who then becomes his cute little pet doing chores and parading around naked in front of him every day. Clearly aimed at lowlifes who'll be content with absolutely anything as long as it features naked little girls. The artwork is ass. The background music sounds like it was taken from some kindergarteners' party CD. Infantile and grating to the ear. Did I mention this has naked little girls (showing nips and all)? Cause that's what the target audience is jonesing for apparently. So it meets the expectations I guess. Good Job!

One getting started to watch this show better know what he’s in for. To its core, Chocotto Sister is about the simple daily lives of the residents of an apartment building, mostly focusing on that of the relationship between two siblings. The thing is, the show throws in lots of ecchi and in many parts oversexualizes the naked body of little girls. I mean, seriously, the story begins with the lead boy being given a little sister as a gift, half naked and in a sack. The innocent mind will see that as a nice Christmas present but the dirty as a girl kidnapped and sold to prostitution. And that is the main catch that can make you like or hate this show. Depending on how you get to bite the premise will either find it as a comical slice-of-life with lots of nude or a sleazy lolicon, dressed as comedy.Apart from that very distinctive feature, the actual story of the anime is very simple and doesn’t really progress towards anything specific. It is just random events in the lives of the two siblings and their interactions with the other residents and some other passingbyers. It also ends in a way that is supposed to excuse not to expect anything other than that.I wrote simple and not generic because all those erotic vibes make it hard to see it as such. Although almost all events are commonplace in most ecchi comedies (or even hentais) the weird mix of comedy with erotism and coming-of life moments create a weird blend that make it somewhat hard to be clear up in your mind on what it is really about. One viewer can focus on this aspect, some other can focus on that aspect. I for once got initially interested on the erotic part, which was really bold and bordering hentai or lolicons at many points (I like that shit). But after 10 episodes the focus shifts to the sibling relation and how the older brother is teaching his sister of various important things in life, while he is constantly surrounded by possible romantic or sexual interests. It was a somewhat enjoyable erotic comedy at this point with some staple life messages here. Ten episodes after that, the feeling went away as well and now I was just curious to see how it will all end. And well, it ended calmly and even tried to excuse this mess in a way to not expect anything else. So for me the Enjoyment is gradually dropping as the episodes go by since the lack of development story-wise was getting more and more tiresome. I still give it a good mark, for making a rather uniform blend of erotism and slice of life, without ever sticking too much on one and neglecting the other. The characters are not special in any way. They are all quite stereotypical figures you can find in most ecchi comedies or even hentais. It’s just that the story made sure to focus a lot on their mentality, as simple as that was, as means to bring out the best of what they could offer. So although their personalities are nothing much, their interactions and mood swings seem logical and even excused. Especially Chocotto; she begins as a pedophile’s wet dream, pure, ignorant to the world, and willing to do anything to please her big brother. Steadily she becomes a cute little thing to cherish and support for all her efforts. All the rest are rather meh to care about.Visually the show is poor; simple character figures and large outlines and not much attention to detailed coloring, shading, or smooth animation. Hands in many parts feel bulky as well. Voice acting and soundtrack are ok for this sort of series. The opening and ending videos are practically the only well made parts in the entire show and liking them or not is all up to preference. The nekonyan dance for example is hard to tell if it’s cute, sexy, plain stupid or all that at the same time. All these are trademarks of animation studio Nomad, which never has high budgets to produce visually and acoustically pleasing shows. In fact, most of them are bellow average. In all, it is a good series to spend your free time if: 1) you are not offended by the fact it oversexualizes little girls (if you are con to the idea)2) you are not expecting a lolicon (if you are pro to the idea) 3) you expect a good story with a great ending (there isn’t much here)Beyond all that, it is not very memorable as a series and chances of rewatching it are slim. Being stuck as a combo of average genres does not make it better that pure and far better made erotic comedies, hentais, lolicons or slices of life. 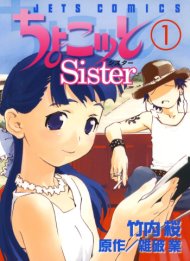