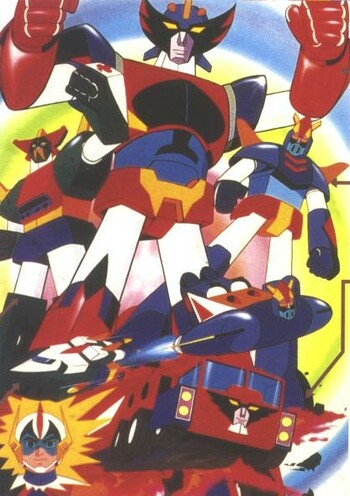 If you're looking for anime similar to Chogattai Majutsu Robot Ginguiser Specials, you might like these titles.

Earth is in terrible danger! From the depths of the ocean, Hell Queen V and the evil Mongool empire have risen, attacking Japan with a fleet of ships and monsters. Hope lies only with an unlikely group of heroes that must gather their strength and pilot four mecha capable of beating these foes. Can Tenpei, Jinta, Kenjou and Gensuke save the day, and the world?

The year is 2100, and the place is Bayside City: Japan's premier international port. In this place, the Angel Arms Company is a group of six women who are brought in to take care of situations that more official authorities can't handle. Their most recent case is to protect the crime lord Hassan, in hopes that the information he possesses will bring down a global terror ring. In an attempt to take both his life and the lives of the Angel Arms Company, the terrorists turn to a newly-hired expert to lead their operations. To make matters worse, the terrorists are armed with the military’s latest weaponry, and their leader has a history with one of the members of the Angel Arms Company. Who will prevail, the terrorists, or our heroes?

Former soldier Shingo Hojo, French spy Remy Shimada, and Bronx gangster Killy Gagley aren’t exactly your “hero of justice” types. They’d rather be flirting, bantering, and goofing off than battling evil. But when the malicious worldwide organization Docooga attempts to steal a new, powerful form of energy called Beamler, they’ll take up arms to fight them... in the awesome giant robot, GoShogun! Now pursued around the world in their teleporting carrier Good Thunder, GoShogun’s piloting team must keep Docooga at bay while foiling their eccentric enforcers, righting wrongs and facing their past.

The story is set in the future when a new threat attacks humans just as they are expanding their presence into space. Now, an enigmatic entity from 17 years ago has been set free, and the name of the entity is Justeen.

When a problem arises, DICE is called to the rescue. And when their special training and skills aren't enough, they rely on their Dinobreakers, which can transform from Vehicle Mode to Dino Mode, to help get the job done! Always on call, always on alert - DICE is ready for action!