Children of the Sea - Reviews 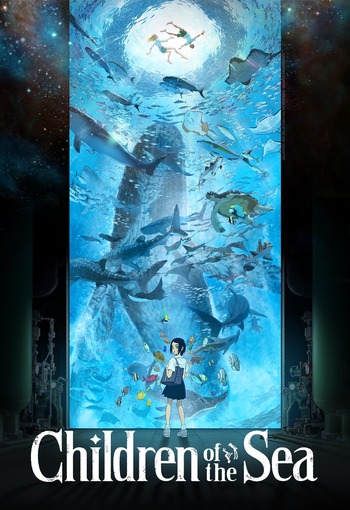 It was OK. The art was beautiful, animation and art style was unique but fitting. Characters were a bit bland in personality and their dialogues were not that impressive. The movie sounded like it wanted to be intellectual and philosophical but whatever message it had was lost on me. Also her mom being a drunk, and her relationship with her parents wasn't really delved into too much. It feels like they were broken up for literally no reason, and alcohol was just thrown in there but somehow mom magically got over it. Also the teacher only punishing her instead of her bully is nonsensical. Sora also tried to act like Kaworu from Evangelion for some reason but it just came off as cringe. There's also weird intimate scenes mixed in there. This entire thing is a mess. A pretty looking one lol. Not worth 2 hours imo. Kenshi Yonezu's Spirit of the Sea makes up for the gaping disappointment this was.

Here is my plot synopsis of Children of the Sea.

Ruka, a junior high school girl, is caught in a difficult family situation. Her mother, Kanako, and father, Masaaki, are seperated, with Kanako spending her days drinking heavily and Masaaki working at the local aquarium. Kanako and Masaaki have been neglecting Ruka, showing her no attention or affection. The summer break has arrived and Ruka has nowhere to go after fighting with her mother. Haunted by a memory at the aquarium, Ruka decides to visit her father and meets two mysterious boys connected to the ocean. Will Ruka be able to reconnect with her parents?

Explaining this part of Children of the Sea (Sea) is important because it is the heart of the movie. Sea tries to tell two stories, one about Ruka's family problems and one about a mystery related to Earth's ocean life.

When I read the synopsis used to advertise this movie, I thought this was going to be a mystery about a global event that was related to the ocean. There is a mystery with two boys related to the ocean, but that is not the most important part of the movie. What Sea is about is a child spending her summer living in a fantasy. Rather than facing the reality of her family, she becomes part of a universal mystery, one revolving around two mysterious boys, meteorites and glowing animals. Anyone living in an unstable family life can relate to wanting a fantasy to live in and to be part of a world larger than the one they live in.

Sea tries to balance two stories. This is the problem that most people have with Sea.  The movie has both stories without developing either stories enough. Many important scenes from the manga are included, but context needed to explain the story is missing or reduced. The supporting cast from the Ruka story and the mystery story are included, but most of their characterization is shrunk to their basic stereotype. I read the manga and have the context to understand what is going on, but people encountering this story for the first time are right to be baffled.

When I first read the manga, I was not sure what the story was trying to say. After watching the movie, I understood that Sea is about a lonely girl connecting with the world in a powerful way. She learns about the connections between people and the ocean, the world and the universe, and the power of the individual and the universe.

You should watch it. The story may not appeal to everyone, however the art is really beautiful and i'm sure you will be impressed.

The story is quite confusing, especially if you havn't read the manga. But it touches on some really interesting topics and I personally liked it. The writing/pacing? could have been better though.

Animation is just....stunning. Really detailed with a lot of movement.

The background art is so beautiful, as well as the character designes.

Joe Hisashi is the composer, need I say more?

Before I begin, I want to make note that I went to see Children of the Sea in theaters, on the big screen. I feel like this was the easiest way to fully appreciate the powerful animation and sound of this movie. The music was not as important in this movie as its sound effects and design, which matched with the animation beautifully.

The ONLY reason why the animation is not a 10 is because I did not like the design of the characters. Many of the characters looked somewhat surreal or ugly. While this should be expected and even acceptible of an artsy film like Children of the Sea, there are other films by Satoshi Kon or Studio Ghibli that have found ways to make characters ugly; but in a charming way. This was more an artistic, stylized design choice, which I can't fully fault them on.

What I CAN harp about is the character writing and story. I get that the two boys were possibly mermen; but the movie does very little to make its story understable to its viewers. The only parts of stories that make sense are the exposition dumps that we receive from other characters. It feels kind of like 2001: A Space Odyssey, in that the movie likely comes with a BUNCH of written side text, which you are supposed to read before you comprehend what you are watching. While I tend to respect artsy films, I do not want to do background reading prior to a movie in order to understand it. Many movies can effectively use body language and themes to portray a plot without a narrative. This movie is too surreal in its imagery to do that.

The main characters are also very dull. Each one feels like it is assigned two or three modes of emotion and that is it. Each of them is either too dense or too broody to actually TALK to each other for more than a few sentences at a time, often relying on side characters to share most of the narrative. This only makes the movie more confusing.

Overall, the imagery was fascinating; but I would not watch this movie ever again. Not even at a friends house, for background music. 4/10 total, because of the lovely music and animation. 1.5 stars, due to the displeasure of watching it.

"If you went into outer space, it'd look exactly the same as the ocean."

I don't know what I expected from this movie, but this was not it. Parts of it I love, and parts of it, well...

To start with, this movie was absolutely visually stimulating. The animation was fluid, and vibrant, and incredibly lovely from start to finish, with a special focus on the character's eyes. I'm a huge fan of surrealism, and that 10 minutes towards the end was a total surrealist masterpiece, on par with Mind Game. The soundtrack is subtle, but fit the tone very nicely. The characters were all voiced well, and the ocean sounds were beautiful.

That said, I do have some complaints. The overall plot seemed very... thin? And, just all around vague. The explaining of things was so flimsy, I'm not sure they even wanted to. The movie felt like it went on for a thousand years- the studio could have absolute scrapped some bits here or there to condense the film and it would have overall improved the storytelling quality. It felt like some bits were very dull and drawn out, and I get the impression it was to focus more on the visual aspect- which is always nice, but not when the overall pacing suffers because of it. A large portion of the movie felt very drawn out, and very dull and boring.

Also, none of the characters seem real? Most of them had a wispy alien aspect to them, but it stopped them from being relatable. The characters get a little bit of backstory here and there, but most of it isn't really relevant, and it contributes very little to the general plot line. A lot of the characters, like the old boat woman, and the long haired research assistant, didn't really contribute much of anything, or really make any sense as to why or how they were there- but they were fed very "woke" scripting to say, to ??? inspire the audience? A lot of the film felt very pseudo-intellectual, and fake-deep.

It was an interesting movie, but one I probably won't be revisiting.