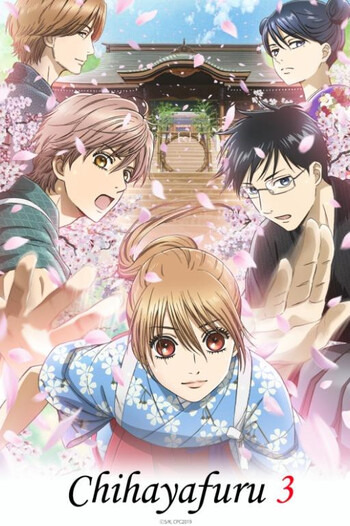 I can’t understand why moonchild15’s review had seen Chihaya 3 and thought the series was going downhill.  Too much evidence to the contrary.  The animation technique is decidedly superior, a point I made in my review of the recap episode.  The storyline is intensifying with the certain deepenings of overall skill in Chihaya and Taichi's doubts whether he'll ever improve his game to the level of mastery.  As for sound, the themes, granted, are not up to the standards set by the previous two seasons, particularly the heavily synthesized, fast-paced closing theme.  But we’ve advanced the story from learning what the game is about, to the quality of teamwork which builds champions, to the drive which makes one want to win it all.  Chihaya 3 was the only version that I had to take in a 'subbed.'  No crime in that; in many ways I’d prefer it.  Still, I saw that the perspective of karuta players from Mizasawa High (and elsewhere) was unaltered.  All learned to play the game for fun, but a few would be tested in such simple loyalty to karuta in transcending to the point of playing with excellence ... or not playing at all.

As the premise of Chihayafuru expanded, so did the cast of characters.  And we are not necessarily talking about new characters as Haruka Inokuma, an old queen who returns to the game and challenges Shinobu for the crown with two children in tow and one more in utero (playing karuta with pangs of morning sickness must not be fun).  We might notice old, uninteresting characters as Mr. Fukasaku, Chihaya’s high school advisor who uses a moment of Chihaya’s lack of drive in karuta to show her academic ways of learning to expand her scholarly roots without compromising her love for the game.  There are defined standards of those players who stand in the way of Chihaya’s dreams as Rion Yamashiro, a rising karuta star and possible friend/rival of Chihaya.  Even Master Suo, painted as an undesirable representative of the sport has a backstory which inspires sympathy.  Suo is afflicted with a degenerative eye disease.  Blindness is in his future, and he only wishes to make a name for himself before he is a victim of this disability.

The oddity of this season could be perceived as a weakness; the climax comes at episode 20 with the resolution of Shinobu vs. Haruka (Queen) and Master Suo vs. Dr. Harada (Meijin) battles.  This left four episodes for a transition ... to where?  Taichi comes to question his ability in karuta, coming in fourth at a prestigious tournament, losing to Arata en route.  He comes home crushed, uncertain of where he stands in the game of karuta.  Chihaya recognizes this and tries to resolve his depression on his birthday by holding a semi-official karuta tourney in his honor, with Master Suo (who vacillates between hating Taichi and 'not' hatting him) as the reader.  But the key events come with Arata's confession of love to Chihaya in episode 14 and Taichi's confession eight episodes later.  Chihaya remains mute through both, though she agrees to play karuta with Arata always.  Chihaya's ambivalence is shocking, her expressively bright red-orange eyes the only clues to what she is thinking.  And ... is she thinking?

The thoughts of a fourth (and final) season are evident.  All episodes in the three seasons are entitled with lines of poems from the 100 karuta cards.  With season three, we've used 75.  Only 25 left, and every reason to use them.  Arata finally has formed a karuta club at his high school, and the promising aspirant to become the next Master is eager to try his team against that of Mizasawa (and those of Japan ... and the world).  He is stunned to learn that both Taichi and Chihaya have quit their karuta club in their confused uncertainty of what to do with their lives.  For this prospective fourth and last season would cover the final year of high school for Chihaya and all the other third-years.  Chihaya finally has reached the level of competence to take on Queen Shinobu, and, if she doesn't self-destruct with her continual emotional breakdowns, has a good chance to become the new queen.  Arata has outright challenged Master Suo to hold off his 'retirement' for one more year so he could battle him on the mat for the prize of Meijin.  Taichi can have that last burst of improvement which could place him in striking range of Master.  Or if this fails, to win the hand (so to speak) of Chihaya.  Or, better, what does Chihaya think of Arata and Taichi?  Or is she thinking of stuff other than karuta?  Hard to tell with that girl.

Cool things that can still be experienced in the fourth/final season.  Come on, MADHOUSE, I know you want to do this!  Do we have to wait six years for this one?

Completely worth watching if you liked the previous two seasons

cant wait for season 4 this anime is a masterpiece

Honestly, it is a very simple story that follows the main character Chihaya and her obsession and love with the traditional game of Karuta and her dream of being the Queen. However, credit must be given when it's due as studio MADHOUSE and the original material do an absolutely amazing job at keeping the story enticing and engaging, so much so that an episode feels as if it is only a few minutes long.

MADHOUSE does an absolutely stellar job at bringing the anime to life with absolutely stunning character designs and background visuals that are a feast for the eyes to see. I honestly am in awe as to just how well the visuals enhance the raw emotions seen during every match of Karuta played, and can't praise MADHOUSE enough for their work.

Having watched many anime over the years, it is unfortunate to see that there are lots of anime suffer from a somewhat dull set of background characters. This is not the case with this anime however, as every single character that plays a role in this story has their story fleshed out to a degree in which you can learn to love them as a character, and not a single one is missed. Simple put, Every single character gets plenty of development and has a unique personality attached to them that greatly enhances the enjoyment and love for this series.

The OP and ED are phenomenal as always and the voice acting is top-notch again in this season. It is as simple as that.

This is without a doubt one of my favourite anime's of all time and I just hope that a chance is given to this absolutely fantastic anime, as I can guarantee that you too will like this as well.

(spoiler free review) compared to the first 2 seasons, i felt like this one was a bit lacking. There were too many episodes spent on certain karuta matches, and therefore it felt a bit prolonged and repetitive at times (basically, i got bored). There was somewat of a development with the romance which i liked, but overall this season was just above average. I hope theres a season 4

Just to clarify, i did not write this blog post. I simply wanted to share it here as its rly interesting