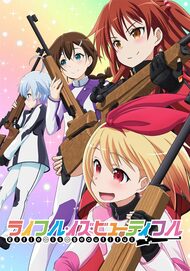 Hikari Kokura has a passion for competitive sharpshooting! To hone her skills, she enrolls at Chidori High School with the hope of joining their light beam rifle shooting club. Unfortunately for Hikari, the club has been disbanded due to lack of interest. Now it’s up to Hikari to recruit fellow students to re-energize the ranks and save the club. Otherwise, she’ll have to kiss her dreams of being the best markswoman around goodbye.

I was attracted to this anime through its alternative title, Rifle is Beautiful, which is the name of the related manga.  Living in a country which has become alarmed with scores of shootings and proposed gun laws, I had to ask “Rifle = Beautiful?”  How?  Then, you learn that it is a series which explains the sport of rifle shooting, and that specifically of the electron-beam rifle aimed at sensitive targets that detect laser blasts.  No bullets, other than the pellets if one opts for air rifle competition. In watching the first episodes, I was listening to the opening and closing themes which were still to be subbed.  I heard little that I could understand, other than a “Let’s Go!” in the opening, and, what I found more intriguing, the last three words of the closing … “My Best Friends.”  The four girls that make up Chidori High School’s Rifle Shooting Club are diverse personalities.  They are merely teammates, not in any respect on a level of ‘friends.’  It is not so much a case of “The Odd Couple,” rather “The Odd Couplings.” It all turns on the main character, Hikari Kokura.  Think of her as the female version of Peter Pan (would that make her Petra Pan or Patricia Pan?), a girl that doesn’t seem to want to grow up.  She is seen in her bulky sweatshirt wearing that bizarre red ribbon which makes her look like an off-beat rabbit (one episode has her offer her version of a joke where she imitates a ‘bunny,’ a jest which goes over like a lead zeppelin to her teammates).  But, when she removes the sweatshirt, she shows she is very curvaceous.  During competition at the prefecture level, one captain of the opposing teams notes that she has … well, it is that specific feminine feature that is a unique palindromic word composed of b’s and o’s which will have to have a plural ‘s’ attached as these come in pairs (OBBOS? Hey, nice guess! … but, no).  Hikari is extremely carefree, dangerously so.  She needs help from her best brainy and bookish friend to get into Chidori High, and then help from her team to study for the exams to stay eligible.  And, I did mention odd couplings?  Let’s compare. HIKARI and IZUMI SHIBUSAWA:  They have been friends for years, in fact, neighbors (thirty seconds apart).  But, they have contrary personalities.  Hikari sleeps in class.  Izumi is a devoted bookworm.  Izumi confesses that she was drawn to Hikari due to her shyness, though she could gain friends easily.  It is that she is comfortable with Hikari.  She is the only one to laugh at Hikari’s jokes, but due to politeness. HIKARI and ERIKA MEINOHAMA:  Most converse of personalities.  Erika is vain, and a little upset that she, the most skilled rifleman of the team, has been beaten by Hikari (and Yukio) in previous middle school competitions.  Hikari hides her body, Erika is hung-up on her good looks.  Hikari’s good-nature is off-set by Erika’s bossiness. HIKARI and YUKIO IGARASHI:  Yukio is the mystery person.  She simply comes into the rifle shooting room and announces she is the precious fourth member.  Yukio is stoic, sullen, and talks little (she’s gabbier in the manga).  To Yuki, a triumph is as celebrated as a loss as is nothing at all.  She makes a record score at the prefecture meet .. not even a smile.  Hikari makes a fantastic score at the same meet and is ecstatic.  Hikari seems to have a normal family life; Yukio announces that she lives alone, a stray cat as her only companion, her parents at home far away.  But, whatever Yukio does, it is above and beyond different from the rest.  Note the opening theme near the second “Let’s Go! Sao! Let’s go!’ where the girls are running side by side and then go into a leap.  Yukio’s jump is done with more panache. With the different personalities forged as a team, guided by a novice advisor Yuuko Tsurumaki who is more into anime and manga than shooting, meeting a vast array of competitors from friendly Karen Sakashita to the masked Komachi Enomoto (does she wear the surgical mask due to contagion, mystique, or intimidation?), we learn the ins and outs of sport shooting.  It is of interest that the final theme centers on the growing friendship of these four quite dissimilar girls, but it ends with the picture of a rifle stilling still on the table.  Almost in peaceful repose.  A gentle reminder that in the world of violence, it is not the tool at fault, but the complexity of the soul at the trigger. 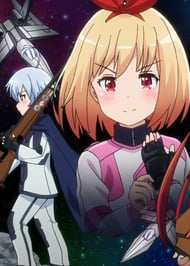 Chidori RSC: Nationals Are Right Before Us 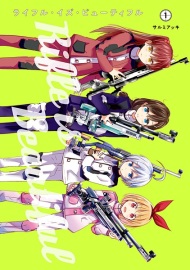