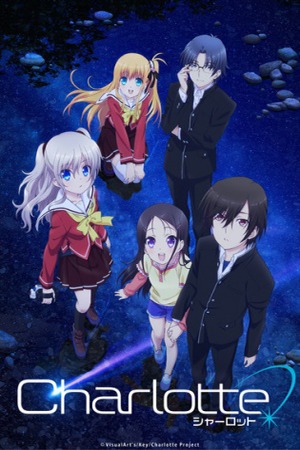 b/c angle beats have the same promblems of surviving, and in charlotte theses characters are also surrfering a promblem.

Misaki Yata is a youth whose reckless and immature attitude has led him to be shunned by his classmates. Saruhiko Fushimi is a loner who views the world in a pessimistic way. Despite being polar opposites, the two become the best of friends.

The secret is out, and the Atractor's sanctuary has been revealed to the enemy. With Quon badly hurt, it's up to the rest to defend their homes, their lives, and their freedom.

A Strange Journey through the mind leads Quon to ancient Japan. A new Attractor is discovered, and while this dream state becomes more dangerous, so does the situation for their new would-be ally.

Quon recalls the destruction of his village and feels regret and anger that he was unable to save the villagers and Towa. Using blueprints to the Custos Headquarters, the group set out to save Tei and Towa. Once inside, they face immediate danger.

With their home in jeopardy, some feel it is time to abandon the gardens. A new character steps in, one that Quon knows very well. The end is near, the players are set, and the final battle is about to begin!

It is the beginning of December. Anna Kushina's birthday is coming up, so the boys of HOMRA decide to celebrate by preparing a surprise party for their little princess.