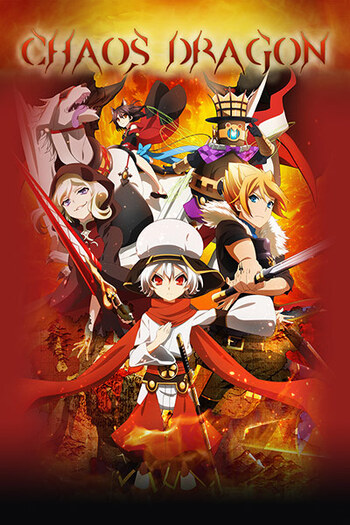 As a total, this anime is still watchable but not really enjoyable. There are plots everywhere instead this could have remain as simple storyline. The Red Dragon has gone mad but wherever is the reason, it shouldn't be manipulate by humans, even as royal family members. The Expedition could have continue and just battles scenes, sacrifice someone to save another would be enough for this anime.

However, things didn't go well, Ibuki's sister Inori appears while she should be dead from the start, the anime plot changes and everything start to go downhill.

The annoying MC Ibuki turn worse in Episode 8 if everyone did watch that, while things got better for him in Episode 9, he does something stupid and screw up everything in episode 10. Our patience have been simmer down into nothing. Since we have watched until last 2 episodes, why not finish it? And there, we have an unexpected ending.

I will basically rate a passing mark for the story, animation and OST, marks are deducted because of Ibuki however we have decent side-main characters such as Sweallow, Lou, Eykha(all good until episode 9), I rate slighty higher. I wouldn't hope for a season 2 but if there is, I will probably watch it.

Let me give you a very short and simple review.

I liked it overall, I think it is a lot underrated, only thing I would mind is the huge amount of plots.

Animation and sound were good enough in my opinion, there is noting I would mind.

I liked all the characters, I didn't hate anybody, well I can say that I most liked the character that most of peoble would dislike :P

This was a notable attempt, a show that presented good ideas but failed at their execution, still for followers of fantasy and dark stories this show may still be of some value.

The story is probably the best part of the show, dark, violent & bloody. The characters possess great powers that more akin to a curse, as great sacrifices are required every time they use them, therefore we have this paradox where there is no clear way of winning, as even if they defeat their opponents, they won't get a satisfactory win.

Unfortunately, the animation is in high contrast with the dark themes using characters that seem to come out from an RPG kids' video-game, they are almost chibi like, so this greatly reduces the impact of the story and alienates both kids and mature audiences.

Both the sound effects and music are good and in theme with the show. The dub is ok too.

Character development is good for secondary characters, the main protagonist does not seem to learn very well and is stuck for more than half of the show. Then is the problem that some character introductions happen too quickly to really care about their deaths and the main protagonist's personality can be very annoying.

This was a show with great wasted potential. I would still recommend you give this a try if you like fantasy, dark stories or care more about the ideas than their execution.