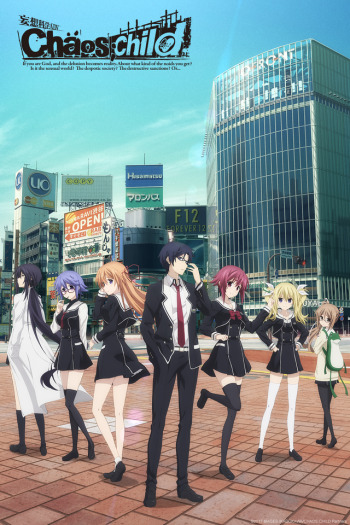 Another interesting entry in the chaos; series adapted from VN. It retains some of the same problems as chaos;head. Namely that it has a very interesting premise and story but doesn't seem to have the time (budget) to capitalize on it.

There's problems with the way characters are used like being dragged around for a bit of fluff or a seemingly main character having no lines and no real personality.

TL;DR Interesting story, interesting characters used in a poor way all trying to be crammed into too small a timeframe. Found it enjoyable but with problems.

Anime adaptations for Visual Novels normally suck, so believe it or not, this actually exceeded my expectations, I pray for Genshin Impect's anime.

This hurts to hate honestly, if they had just done a bit more with the characters, this would've been amazing. But aside from our protagonist Takuru, everything just seemed to crammed in, and I did hear that this was very rushed. So without further ado, lets get into it.

Ok, this is a sequel without even feeling like one. It's just completely separate in every way and there's no refrence to any of the stuff from Chaos HeAD other than the Earthquake and the recap episode (It's had been almost 10 goddamn years, wtf).

This is a very intersting and well thought out story that starts with a group of kids looking into a murder case only for the case to start following them wherever they go. I liked it, a lot.

The OP was amazing, eazily the best in the science sires. The voice actors were all over the place... IDK where Asami Sansada came from since I've literally only ever heard hear in Date A Live and Freezing, I guess she just show up at random. I also liked Suzuko Mimori as Arimura (I didn't even realize it was her xD).

Haven't checked out the dub yet but the cast looks promising there too. Riccardo Farajo is super underrated and needs more roles.

As mentione earlier, this is the biggest setback for this show. Takuru is really the only one who got any in-depth development. Hana just played games on her computer, Nono turned out to be an entierly different person out of nowhere, and the villains (Onoe and Sakuma) also came without any real leads, and it was all pretty much just one huge plot twist without any warning. Mio, Itou, and Takeishi also didn't do as much as I felt they should. It was all just one thing after another and there was really no buildup (Other than Onoe disappearing before Watabe was killed).

Final Score: 7.5/10. Should've done a bit more with this and it would've been amazing.

I have wacthed exactly one episode and 13 minutes and 26 seonds of the th secod 1. I truly just couldn't get into i ad didn't like it. Not trying to ruin the experince for any one else but this show is truly not that good in my opion. But don't let my review sto you from wacthing this shit fest of a show. PEACE :) :) ;)