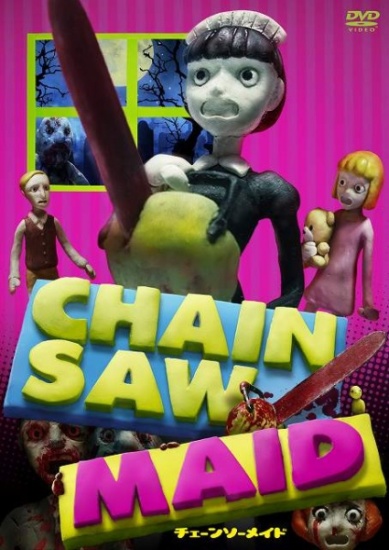 Story: Not the table, not on the table, not on the- aww.... and that's how it truly starts, after the near striptease. Obviously this is high on plot, and the title only goes to further it, and obviously everything after the striptease is a load of shit, which this would be if it weren't so unintentionally hilarious. The violence is righteously over the top, senseless and chainsaw-fueled, for extreme gore and extremely questionable fun.

The premise is what it is; Chainsaw Maid, and you shouldn't expect much else from that.

Animation: A whole new definition of puking your guts out, to hilarious results. Again, questionably. It's claymation in it's gory glory as blood, guts and purple brain matter splatter and lay about as the carnage ensues.

Sound: Silent movie a'la mode! I got a wicked laugh at the subtitles for some reason. Apart from the tweeting from a random bird, there's the chainsaw, beatings and any sounds associated with violence. It does what it's suppose to do.

Characters: Chainsaw Maid has a chainsaw and hatred for zombies, and is thus the most well-developed character. Special mention goes to the fat pedo shirtless zombie, who bursts through the child's bedroom window. And the dad who watches the maid strip. Yeah. Who cares about characters, the maid has a chainsaw! That is worth points alone.

Overall: Is it bad? Yes. Is it funny? Questionably so but then again, enjoying this is questionable. It's packed with gore, tasteless violence, absolutely no redeeming value and it's fun in a disturbing violent way. So bad it's good, Chainsaw Maid is simply a work of blood.

"Chainsaw Maid" doesn't even get the chainsaw until 4 minutes into the 6 minute short. There is no excuse for this.

Chainsaw maid is a grusome claymation that I really didn't enjoy.

It tells a simple story of a group of zombies attacking a father, daughter, and their maid who protects them by killing all the zombies (via chainsaw of course). I don't like claymation, but it was at least parcially effective because I was disgusted by the gory kills. Unfortunately, I found them a bit too gross to be enjoyable. A case of 'gore to have gore'. Overall, even with it's short run-time, Chainsaw Maid isn't worth a watch.

This is probably Takena's best animation I have seen so far. The animation is one of the better ones, and this one is relatively long compared to some of his others as well. However, like all of Takena's other animations, it is still bad.

The sound effects are pretty meh, but not too bad

The characters have nothing to them. You do not know the reason for their actions, only that they have actions.

The story is mildly entertaining, but relies mainly on shock factor. The purpose is to shock you, that is all there is to it. It was never meant to be a well written story anyways.

Overall it is a 2/10, which is better than what I gave to most of Takena's other animaations.

Moved from my blog:

Sometimes after watching an anime I'm asking myself one important question:

Chainsaw Maid is one of those anime. Well there is a huge ammount of similar animations floating around the internet (not necessarily Japanese ones), but what makes CM stand apart from those is the insane amount of gore. In case you wonder what I am talking about: Chainsaw Maid is a claymation (stop-motion cartoon done using plasticine) on top of that its a b-movie with zombies, a maid and a chainsaw.

While it deserves recognition for being an attempt to do a b-movie using plasticine, it is extremely gory and it IS very disturbing. When I was watching this short I probably made a face similar to the one the father character had when he saw what was left of the zombies in the final scene. I can't say I enjoyed watching it and unless you want to feel disturbed I recommend staying away from this anime.