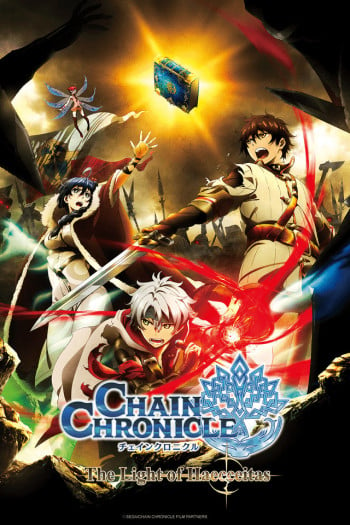 If you're looking for manga similar to Chain Chronicle: The Light of Haecceitas, you might like these titles.

In a world where magic abounds, 15-year-old Anti Kythera is the odd one out. No matter how hard she studies, she can't even use the most basic of skills. Her only hope is her upcoming Skill Bestowal: a ceremony that can help even the chronically magicless discover their talent. But what Anti receives is something completely new: Gearcraft, a skill that allows her to make and control golden gears!What can a restaurant owner's daughter, much less an aspiring adventurer, do with gears? As it turns out, quite a bit. But it's going to take a little imagination, and a lot of effort, if she's going to discover the secrets of this never-before-seen power. Can Anti tame the tiara-shaped artifact that calls itself “Crown Gear”? Will she ever become as great as her idol, Purple Lightning? Join her as she gets into gear for a life of adventure!

“No money, no women!” The (self-proclaimed) carry of Axel, the delinquent Dust, is suffering from a chronic case of empty-wallet. Whilst the newbie adventurer Kazuma continues to steadily make a name for himself –, Dust is busy setting people up in scams, selling stolen products, ripping off noble ladies, and the like. ‘Let’s make some money today too!’ Whilst he was doing so, he was told an ominous prophecy by the great devil Vanir: “Thou hast a interesting future ahead.”