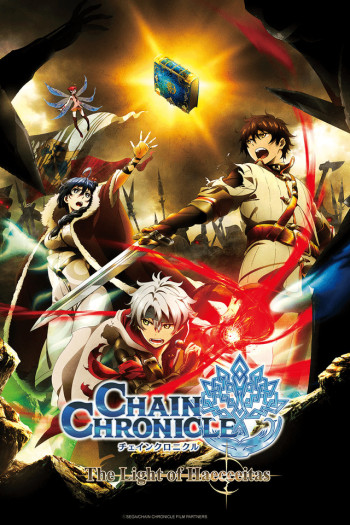 If you're looking for anime similar to Chain Chronicle: The Light of Haecceitas, you might like these titles.

Same type of setting and general feel. Heroes battle to save the world from dark forces. Nice animation and world-building in both, but this is based off only the first episode of Chain.

As I started watching Chain Chronicles, the first thing that popped in my mind was Tales of Zestiria. There are some similariies in storyline, characters and animation style. Both are trying to fight the darkness that is consuming the world and have some decent fight scenes. If you enjoy one, I'm sure you'll enjoy the other.

Fuji & Gumi Games' strategy drama RPG follows mysterious girls who carry the names of legendary weapons (such as "Masamune") as they search for their lost memories.

Leaving behind his homeland, Zinkenstill, Gran continues his journey with the other skyfaring crew members, hoping to reach the Island of the Astrals.

Monsters and wizards and dragons, oh my! In a parallel world filled with fantasy and wonder, adventurers live out their dreams. Pastel G. King is one such adventurer – and a poet and topographer on the side. She’s a member of a low-level party who travels the globe in search of fame and fortune, and her travels are anything but ordinary. Alongside the baby white dragon Shiro, leader and soldier Clay, cocky thief Trapp and elf wizard Rumi, Pastel will embark on a grand adventure filled with mystery and fun.

Six cash-strapped adventurers embark on a quest to collect hot spring water to re-pay their debts in this lampooning of classic Dungeons and Dragons style video games. The party gets involved with a plot involving a white dragon who demands a human sacrifice every 10 years, and an evil mind controlling mage.