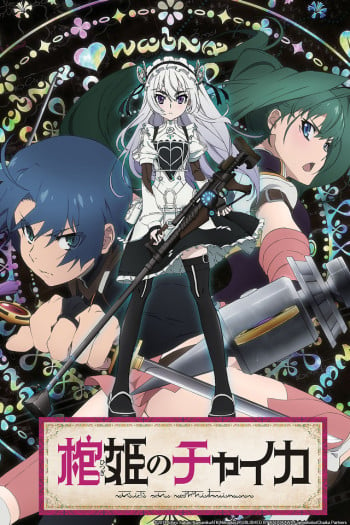 Both Animes are done by Bones, have similar plotlines, and even similar characters.  But the differences make both enjoyable in their own right.  Scrapped Princess is a story about a young lady with a dark destiny, something will happen on her 16th birthday and everyone believes that it is a dark destiny (possibly world ending).  In contrast, Chaika: Coffen Princess is the story of a young princess who is on a quest to recover her slain fathers remains.  For what purpose remains to be seen.  Both are compelling stories with well developed characters (that you actually care about).  Simply put, if you like one you will like the other.

Both anime are based on light novels written by the same person. Both are fantasy action adventure series and have somewhat similar main character trio. A girl (and a princess in some sort of way) who needs to be protected and siblings who protect her. I think there is really no point mentioning all the similarities, so I might mention a few differences instead. At times Hitsugi no Chaika can be much darker and gorry than Scrapped Princess and last but not least, many characters in Hitsugi no Chaika are named after cars, rather than named after guns like in Scrapped Princess. If you've seen one and liked it, the other one should be right up your allay.

Both shows follow the story of an unfortunate princess traveling the magical world together with her protective friends. While the setup is very similar, the rest of the story takes a different direction which is equally good. It basicly feels like more of the scrapped princess, and after watching the show this is all I personally needed

The Mystic Archives of Dantalian

After his grandfather’s untimely death, Hugh Anthony Disward visits the estate of his inheritance where he discovers a library that’s out of this world. Embodying the archive is Dalian, a clever girl with a sharp tongue as biting as her sweet tooth. Circumstance leads to necessity, and she teaches Huey how to harness the power within—a handy trick to learn, seeing as it’s the only way to subdue the monsters brought forth by magical works of literature.

Both anime aren't very much alike, but they do have a similar theme when it comes to certain characters.

As I was watching Chaika:Coffin Princess, I noticed something that reminded me of Dantalian No Shoka. Basically, both anime have a very similar theme. Both main girl characters wear mostly one color of clothes, and as the story progresses, you find out there are other girls with other color combinations that are equally as important and either have a similar mission or similar power. Both anime have a girl in complete Red, Black and White; and two out of three of the girls are both good guys, while the others are not so good. Also, each girl has at least one guardian that helps protect or fight with her.

I decided to watch Hitsugi no Chaika from the recommendations of Dantalian no Shoka. And yes, it is a very good anime.

Chaika: The Coffin Princess and Escaflowne both have a number of similar elements. Specifically, they both have a setting in which magic and technology are mixed in an interesting way, and are visually inspired by traditional fantasy for the most part. They are both fantasy adventure stories where politics eventually get involved. Escaflowne has a main character who comes from earth, and is thus an effective proxy for the audience, which is something Chaika only sort of has, with a slightly ignorant main character, so if the main reason you loved Escaflowne was that it featured a shcool girl trapped in another world, then maybe this is not a perfect recommendation. I am sure most people would enjoy both, though.

I apologize if the following is a bit difficult to understand. It was challenging to adequately explain my reason for recommendation without going into detail, as I refuse to leave any "spoilers".

Both series are set in a rustic/medieval post-war world where magic and monsters exist. Both also include some type of prophecy or warning regarding the resurrection of a defeated "evil overloard", as well as the formation of a group/groups of heros. Additionally, both series share the same strange plot twist that develops into the underlying backbone of the story.

However, there are subtle differences between the 2 series, which I can only best describe as: both series take the same essential "base elements" to create 2 similar stories that move in somewhat opposite "directions".

I hope your interest is now piqued enough to go watch both series. Enjoy!