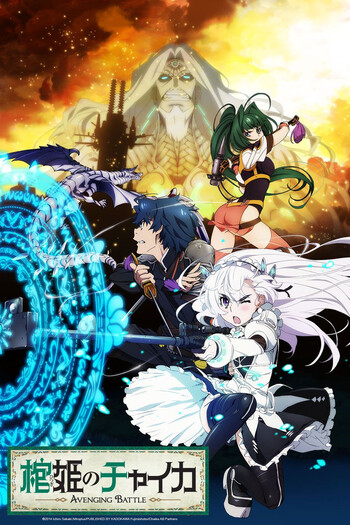 If you're looking for anime similar to Chaika: The Coffin Princess - Avenging Battle, you might like these titles.

In a world known as Soul Shell, floating islands are mankind’s only protection against falling into oblivion. The power of the song is able to heal wounds and create miracles; a power that the young Aurica can’t seem to master. After his ship crashes, Aurica finds herself in the company of Lyner, a fighter who desperately needs to return to what’s left of the sky. Together, the duo set out to find an engineer who can repair Lyner’s ship; but monsters are afoot! With shifty engineers and fire-breathing beasts in their way, can the two manage to stay alive?

The stage this time is the “holy city” of Kimluck, whose doctrine is the eradication of magicians. They are the historical enemies of Orphen and graduates of the Tower of Fang. Orphen understands now that Azalie wants to inherit the will of her teacher, Childman. Orphen and his traveling companions head for Kimluck in search of the secrets of the world. However, a fierce battle with the “Death Teacher” awaited them. What is the hidden secret of the world revealed in Kimluck? Who is the successor!?

Orphen is a powerful sorcerer who is notoriously lazy. Everything changes when he finds a way to save his sister, who was turned into a dragon during their days at magic academy. Betrayed by friends who refused to help, Orphen will stop at nothing to track her down, even if he has to go it alone.