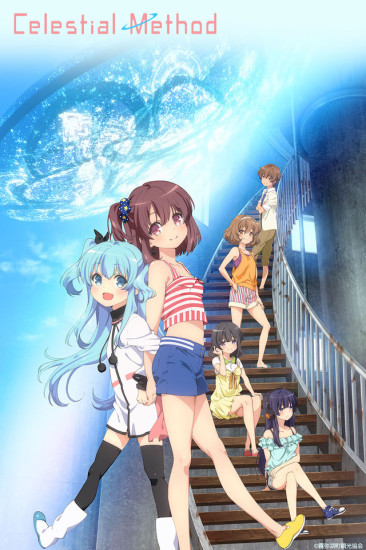 Sora no method is a story about a group of 6 kids and their friendship. The protagonist is a girl called Nonoka, who after an absence of 7 years goes back with her father to the town where she had lived previously. Hovering over this particular town is a giant alien saucer which has been hanging there in the sky for (surprise surprise) 7 years. Nonoka has just sketchy memories of the time she lived there as a little girl, but when she gets back she re-acquaints herself with her old friends and slowly her memories start getting clearer. Everything revolves around the saucer in the sky and the cute little girl called Noel who seems to have some mysterious link to the saucer and to the 5 kids.

The visuals and animation are good, it's pleasing enough to watch. As for the sound, I just skipped OP and ED, while in general I didn't notice the background music nor was I disturbed by the voice acting - so all good in that respect.

I think the characters are pretty average; each one has a distinct personality which comes across quite clearly but no one is particularly memorable; even though Noel is surely the one that you get to care about the most.

The story too is narrated well in regards to pacing and atmosphere.

All the previous mentioned aspects, even though I consider them to be good, cannot make up for the story's evident shortcomings.What makes this anime less than satisfying is the premise, the characters' motivation and the story itself which is quite lame.  Just as an example, there are a couple of episodes dedicated to Yuzuki where her hatred for the saucer is really played up a lot; but when the reason for that hatred is revealed, you are just dumbfounded as to how lame it is. And this happens a lot. Good storytelling is not enough if the story itself isn't worth telling.

Sometimes, there are anime that will give out strong emotion impact. To me, this time, Sora no Method holds this quality best, and I really mean it, best!

All about the story of friendship in life, and friendship itself is the most important thing, that one should have, and should treasure in his/her whole life.

Being with friends, especially the ones that already stayed beside you since childhood is another important quality that rarely one has chance to have. And if you have the chance to experience this feeling, that very moment, all I can say that you're among the lucky one ;)

Treasure friendship, love you friends and family. And utmost important, love and support good (and strong impact) anime like Sora no Method!

Hellooo people, I'm here again watching a show and wondering why i did, and now you lovely people can read the pain with me. So this is  another SUPER melodramatic SOL with some pretty good animation but that's really all the nice things I have to say. If you like the really dramatic SOL that Japan seems to pump out, then you'll love it but for the wary I would say avoid but if you find your souls being crushed by boredom from the most depressed high schoolers in the country then drop it cause it won't get better. That's the short one the detailed one will be just as fast.

sound is also ok scenes feel empty sometimes but there isn't any weird noises. Also the music is your opinion

the characters are okay the only problem is that even though they have some depth, they just don't feel relatedable. And I am a twin and also a former loner, sooooo I'd get the idea that I'd at least relate to some of them but no they just don't feel like real people most of the time.

the story is the main issue, if you like this kind of hyper dramatic SOL then you'll absolutely love it but if you dabble in it from time to time this one just eats away at your brain especially since the entire show is so incredibly predictable. I felt like I new almost the entire story after the 2 epsiode. Also the last episode wasn't terrible until the last 5 minutes. Throughout the last epsiode though all I could think about was damn that was really a waste of time and I almost never say that.

to wrap it up the show isn't bad in the sense of poor quality but for the normal weeb and weeblets who casual watch these dramatic shows I really have to say that I felt like such a waste of time which is the worst outcome. So hopefully this helped some of you, thanks for the read!