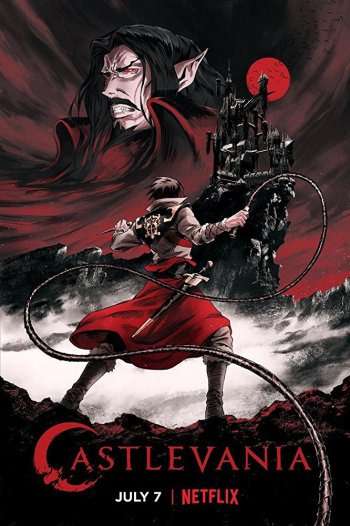 Castlevania is a gem in a disappointing year for anime thus far. Its also a fairly surprising one, for no other reasons than a) series based upon video games are often pretty hit-or-miss and b) Konami seems more likely to allow its properties to be turned into Pachinko machines than high-quality experiences anymore. Luckily, these four episodes are the introduction to what looks like a promising show, and (moreover) one that you don't even need to be a long-time fan of the series to enjoy (if I am anything to go by).

The show begins with a meeting between the infamous Count Dracula and Lisa Tepes, a woman who wishes to use Dracula's profound scientific knowledge to be a benefit to the people. Dracula and Tepes end up married, but an unfortunate turn of events involving a stake, a bonfire and accusations of witchcraft (typical Friday night) end with Lisa's death, and Dracula's vow to return in a year and lay waste to the land of Walachia, killing any human being who still lingers. A little over a year later, demons are on the loose and killing indiscriminately, summoned from Hell to satiate Dracula's desire for revenge.

First of all, Castlevania has a real sense of the gothic going for it, an art-style replete with gory reds and dark colours but also really nice to look at, beyond the many disembowelments. A great deal of effort had obviously been put into the look of the show, and the fluidity of animations make combat and action scenes a joy to behold. A similar level of effort is put into the voice acting, which frequently (in the English language version at least) breathes life into characters who in some cases may have seemed derivative otherwise. Richard Armitage is the stand-out as Trevor Belmont, son of the well-known Belmont family who were excommunicated from the Church following accusations of black magic. Belmont is sarcastic, sometimes physically imposing, and entertaining whenever he is on screen. He is also a dick, but this seems right at home in a series about murderous vampires, manipulative (and gloriously sinister) bishops, and townsfolk urged into what is essentially murder-voyeurism.

One of the things that occurs most to me, in considering the series, is how bloody the whole affair is. Frederator Studios does not shy away from viscera, child deaths or dismemberment, and under other circumstances I would probably call this overkill. In Castlevania's case however, whether due to the gothic feel or the hellish atmosphere that precedes such sights, it doesn't seem out of place; it doesn't feel ludicrously excessive (like in Elfen Lied) or wearisome in its frequency (Attack on Titan), so this is one of the few instances in which "dead babies" doesn't appear as a negative. On the other hand, while the show is often pretty funny when it tries to be, there are a couple of weird jokes in the first couple of episodes that I don't want to spoil the effect of, but which seemed clumsily-implemented and were pretty much only there to be (for want of better words) "edgy" in a show that didn't need them.

There are other negatives I would like considered; people have already noted the short length, and the abruptness of certain revelations and cast additions in the final episode (though apparently Netflix is committed to future content in this series and the cliffhanger ending won't be left to dangle indefinitely). While I thought that the pacing was pretty good overall, the first and last episodes are slightly heavy on set-up, in terms of back-story and future seasons respectively.

In conclusion, however (TL;DR): Castlevania is easy to recommend to fans and newcomers to the franchise alike, and certainly one of the better efforts I've seen from 2017 thus far. Give it a look-in if what I've said appeals to you (obviously), because, above all, I was never bored while watching this one.

And now, a review from a blind watcher.

I've never played any of these games myself, but was midly excited to watch this, as I was aware the games were action packed, monster-fighting goodness with a bit of lore mixed in.

This anime is 4 episodes of painful monologuing, standing around doing nothing, talking about irrelevant topics, falling down holes, and one liners that come straight out of an old Schwarzenegger movie, with SOME action mixed in.

Story: Extremely weak. The premise is ok, but where they decide to go with it was based all upon the things the characters did and the events leading up to their fight with dracula. Unfortunately, instead of exploring that, the story was all about the evil church leaders and the mindless rabble of the village destroying themselves. Besides the beginning and end, it had very little to do with Dracula, and a lot to do with Trevor's meaningless sidequests. There were a few ok story points here and there, but overall a wash. The episodes blend into each other terribly, going from a goat-screwing conversation at the end of one, to resuming the goat-screwing conversation at the start of the next. With so few episodes, this is a pretty big hit.

Animation: The supposed strong suit. There were some great scenes, but also a few reused assets thet left something to be desired. The intensity of the action sequences make up for that a lot. The visual presentation is very good.

Sound: I don't know about anyone else, but I was not impressed with the sound at all. The SFX were nothing to take note of. The music was a decent composition, but not applied well in the least. It barely matched up to any of the scenes. In a fight scene, it was some happy jaunty fantasy thing. During the boring monologues, there was epic chanting. So weird.

Characters: EXTREMELY cliche and weak. Trevor and Dracula were almost ok, but almost everyone else was a sideliner and unlikeable. You've got your generic love interest, generic evil preist, generic thug, generic everything. Nothing really stood out. The character designs however, were OK. The monsters too.

Personal Enjoyment: Since I watched this with a few other people, it was great to make fun of the characters. Personally, I don't think i would have enjoyed it much at all without that. 4/10.

Overall, I'd say that this could be one of those "anime" that draws western audiences to the genre with its edginess, but nothing more. Not special at all, and boring. You'd be better off watching something better with vampires in it that does it right, like Hellsing Ultimate. Overall: 5/10.

I have been a big fan of Castlevania since I was a kid, playing all of the hand held games such as Harmony of Dissonance, Aria of Sorrow, Portrait of Ruin, Order of Eccelia and a few others, plan to play all at some point. I do have some nostalgia for the series, so expect my score to be a bit high.

Story- The story begins when Dracula becomes involved with a woman named Lisa who only seeks to learn other ways to heal people. Time skip a bit and we see Dracula's wife being burned at the stake for trying to help others by the church while Dracula is traveling. Viewers should already know this isn't going to end well. By the end of the first episode Dracula keeps his word and invades Wallachia with Castlevania, bringing death and destruction. With the introduction of Trevor Belmont, the story begins. Over the course of the four introduction episodes, we see the main cast include Sypha and Alucard, who look like they were faithfully adapted from the games. Again, this is still the introduction season, but the hype is real so I think expectations will be pretty high for the next season.

Animation- The animation has got to be one of the strongest points for the first season, from the fight between Trevor and the Cyclops to the season finale fight SPOILER between Trevor and Alucard. They animated the fights so well I get the same rush with fights from Bleach and Attack on Titan. The characters have a pretty good design too, especially since Alucard looks exactly like he does from the game(s), so I bet fans are happy about that.

Sound- The soundtracks for the show were pretty good, which make sense since this is Castlevania. The sound for weapons worked pretty well.

Characters- Its pretty cool to see how Alucard fell in love with Alucard's mother, seeing how they are a lot alike. During this season alone, we were introduced to the three main characters being Trevor Belmont, Sypha Belnades, and Alucard. Maybe without intention at first, Trevor didn't want to accept the role of his family line. But Trevor is also someone who can't turn his back on those in need, like the case with the speakers. By the end of the season we pretty much see him step into his role as a Belmont. His character like my brother has mentioned is similiar to Nathan Drake from the Uncharted series, who is pretty much a likeable guy. Alucard pretty much has the same motivations as Trevor, but the season ends before we see any more of their character develop, so the next season will be something to look forward to.

Overall- The first season was basically an experiment to see if there were enough people who wanted more Castlevania, and the result is one big loud YES! I enjoyed the short season and maybe my nostalgia is a bit high, but I see great things for the Castlevania anime, probably the only video game series to be given a faithful television adaption. I saw some pretty good themes included and more than anything I am excited for the next season to come out!

An absolutely amazing anime to watch, with the characters in this one were truly exceptional. The personalities of the characters were very consistent and did best to reflect the gritty world that these people have been forced into. I felt the animations were also very good, with the magic and blood effects looking excellent against the grim bleak background of the world. When there was fire and battle, it really showed, which added tensions and vigor to the battles. Add it to your list to watch.

I didnt even know this was based on a game, its basically an Anime of ''Vlad the impaler'' aka Dracula. (dark fantasy)
Also this is hard to write an review about.

Story: It starts of really good, and tells us basically what this anime is about which i like.
The only reason as to why i gave it a 6 on story is becouse theres only 4 episodes?
I'm not getting to much backstory on some of the characters, also some of the scenes are to unrealistic for the set of rules this has for the anime, 2 humans survives falling over 1000 meter (?)

Animation: Wow, just wow. some of the fighting scenes are perfect.

Sound: It feels a bit off sometimes as in the fighting scene in the bar in episode 2.

Overall 7.5.
It would have been rated higher if it had more episodes going into depths on the backstory/story.