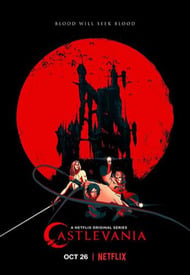 Loving this series! I am a big fan of Castlevania and season two has not disappointed me. Good introduction to new characters and love the interaction between every character in this one. Story wise it is done very well. Even though there may be some differences in the game, the series is still doing a good job of putting characters and what not in there that people will recognize. Animation is awesome! Nice shading and crisp animation through every episode, battles looking spectacular. Opening music is very good, and there is also a point where it seems the base game soundtrack is used in the Dracula fight, it was fun to hear that. Overall this is a great anime to watch and I look forward to seeing more!

Full disclosure: I haven't ever actually played the Castlevania game, so this review is impartially based solely on its existence as a show. TL;DR - Give it a shot, but don't expect the next Game of Thrones. The first season of this had me intrigued and put-off in an almost equal fashion. While the premise seemed promising, the small number of episodes and some of the voice acting was detrimental to the series. That being said, I was looking forward to seeing how season 2 would turn out. The main issue I have with Castlevania isn't with its premise as a show itself - it's decently made from a technical standpoint and is based on a well-known game of pretty large popularity. Not to mention it also includes vampires - which most people enjoy - and has enough action, combat and gory realism to satisfy the average viewer. So it wouldn't be fair to say that Castlevania isn't entertaining in its own way. The major issue is with the story. Now, as I said, I haven't ever played Castlevania as a game, so I came into this show with absolutely no expectation whatsoever. Yet I find myself looking at a storyline that just seems incredibly badly written. It has all the ingredients to be a real ringer, but lacks the substance to really see it through. Without giving too much away (providing you've seen season 1), we know that Dracula has had a year to construct his army with the intention of slaying humanity for the death of his wife. This year could have been spent with just his forgemasters, Hector and Isaac, by his side, as they are the only ones with the ability to create night creautres from corpses. The three of them could kill a few people, the forgemasters reanimate them, and then the night creatures continue the cycle to quickly build up a force of almost unstoppable killing machines. While they do indeed end up with a certain number of night creatures, the year in question seems to have been spent with Dracula amassing a frankly ridiculous number of vampiric generals who do absolutely nothing but stand around the castle bickering all day. What on earth is their purpose? To my knowledge, they haven't brought any forces with them, so why are they needed in the storyline? It just seems like they're used as filler characters to buff out the scenes and nothing more. Following on from that, wasn't Dracula's goal supposed to be the destruction of humanity? He does virtually nothing to further this at all. In fact, he doesn't even kill a human. Not even the bishop who ordered his wife's death in season 1. Sure, the bishop ends up getting a particularly deadly kiss from a night creature, but surely Dracula would have wanted to slay him himself? Being set in Wallachia during the 15th Century, the forces of darkness wouldn't have to compete with much more than peasants with pitchforks and the odd terrified soldier with a sword. So why is it that, with a goal as ambitious as wiping out humanity, the only thing they manage to achieve toward that goal is to attack Gresit, and even then not kill anywhere near everybody in it? Seriously, that's about all they manage to accomplish. A force of night creatures and an army of useless generals in its own right and yet they half-slay one town before absolutely collapsing. It's just so nonsensical. I won't spoil the ending, but to say it's cliché and disappointing would be an understatement. Lastly, a word about the double sided coin that was the voice acting. Some of the actors - namely the Hispanic ones - performed well. As a generally passionate people, it's perhaps no surprise that their voice acting reflected that, which made for well-rounded characters. Some of the other actors performed admirably, too. Those who voiced Carmilla, Isaac, Dracula and Alucard come to mind. However, the biggest let-downs were Trevor, Hector and Godbrand. I had a major issue with Trevor's voice actor in season 1 and it didn't improve much in season 2. His lines are sometimes witty, but he lacks any degree of emotion. I appreciate the character of Trevor is meant to be rather nonchalant, but when a giant cyclops throws you 20ft across the room with your back smashing into a concrete pillar, a small, tired "ugh" doesn't really cut it. Alucard is essentially very similar to Trevor in the sense that he's cold and distanced, but his actor managed to nail it just right. I won't dwell on Hector's actor's highly unnatural sense of delivery because my favourite character to grill is about to come up.....Godbrand. Jesus H Christ, Peter Stormare. What were you trying to do with Godbrand exactly!? He admits during the show that he's a Viking, yet his accent ranges from Scottish to James Woods in the same sentence. It's ridiculous. No semblance of a Scandinavian accent.....no semblance of a consistent accent whatsoever. I'd cry if I wasn't laughing so hard. All in all, this show isn't *that* bad. I know this review was a bit damning, but like I said at the start, it's entertaining in itself for sure. I'll absolutely be watching season 3 because I don't hate the show, I just find it disappointing more than anything that they have slapped a story together so haphazardly when it could have been so much more. If you like vampires/magic/the gothic scene then definitely give it a watch. If you're a fan of the Castlevania game.....I wouldn't be so sure. I would imagine the game was fleshed out a little more than this.

Castlevania is like many anime attempting to be gritty by having lots of gore, lots of blood and a lack of purpose. The vampires are boring, the characters don't do much and the story has little momentum. If people want vampire action, seeing Dracula portrayed as vulnerable by having a mortal wife that he never turned is interesting. The problem is that this never really matters.  I don't recommend this anime because the characters are hollow, the story is poorly gritty and there is a sense of pointlessness. 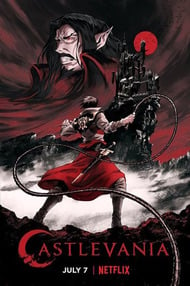 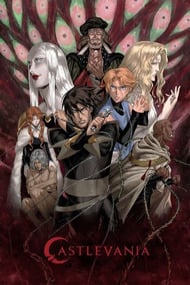 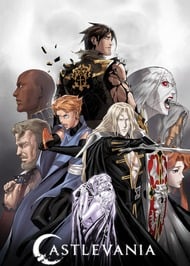 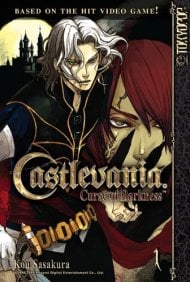