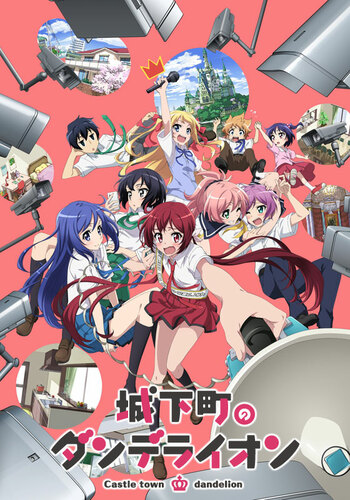 If you like family based anime, you'll surely like Danchigai! I recommend this because it's a cute and funny anime about a brother and his 4 sisters.

-Both have a older brother that goes out of his way to look out for his spunky sisters. -both funny and dramatic

-Both have ironic fears they have to deal with everyday and ideas for the furture.

if you like Danchigai you will like Joukamachi no Dandelion as well for it gives the same feeling.

If you like high school anime, then you'll surely like Ouran High School Host Club!  It's about a club full of boys (and one girl ) who's purpose is to entertain girls for profit.

Asahi Kuromine is a high school student who supposedly cannot keep a secret. One day he spots his crush Yoko Shiragami, unfurling a large pair of wings from her back. She explains to him that she is a vampire and is only able to attend a normal school on the condition that no one discover her true identity. Asahi swears to keep her secret but finds it hard to maintain seeing as how Yoko herself is an airhead and Asahi's friend Mikan keeps bullying the two of them.

If you like high school, funny, and supernatural anime, you'll surely like this! Jitsu wa Watashi wa is about a high school boy named Kuromine-Kun who likes this girl (who's a vampire) and throughtout the anime we learn that he must keep her secret. We also meet a ton of other supernatural creatures!

Both anime has a big hetic family that doesnt always see eye to eye. Also gives the same feeling of a caring brother with abunch of sisters that have different insecurities or tend to be overbearing and think highly of him.

Both are about the daily lives of royal families preparing and campaigning for the throne. Royal tutor is set in a traditional palace setting while Castle Town Dandelion is set in a modern-palace hybrid. Both are very entertaining and have a lot to do with familial bonds.