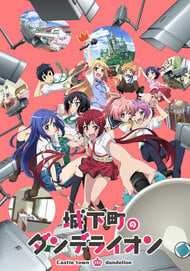 Akane, a princess with the power to control gravity, competes against her eight super powered siblings for a spot on the throne. The catch? Each would-be ruler will be monitored 24/7 by hundreds of video cameras that broadcast their every move nationwide. As the royal siblings live their lives, their subjects will watch and eventually vote for a winner. But with privacy out the window, will the camera-shy Akane be able to keep her cool?

I mean... it isnt bad or anything.... theres just nothing particularly special about it... very mid. some lol wothy moments but also entire episodes that were hella boring. the fikrst 2 eps especialy were quite tedious. it did get better after that. also the fan service was completely unneccesary here, felt out of place. overall a "just ok" show...

Joukamachi no Dandelion is an adaptation of a 4koma manga of the same name.Meet the Sakurada family, a group of 11. Being so large isn’t the only strange thing about this family however; The father is a King, and the 9 children are in a battle to become the next in line! A battle of… popularity!There is another strange thing about this family though. All born of religious blood receive a superpower.Each week, we get to watch them deal with both public and private life, understand their responsibilities as both royalty and superhuman, and find out why they want to become the King of their land, all in hopes that they will be number 1 on the popularity polls.Each episode has us follow around at least one member of the family, during which we will get to know them better. Most episodes are split into 2 or 3 parts, each part centring around a different Sakurada. With 11 family members, you’d think developing the cast would be quite the task, however the show does a surprisingly good job of bringing each character to life, even the parents! We get a good look at everyone’s little group. Some people spend more time with certain family members than others. Some have totally different circles in school and at work. It’s really nice to see all the connections. Joukamachi no Dandelion is actually my favorite style of show. It’s a refreshing episodic, with a large interesting cast, and lots of silly and serious things to enjoy. It’s also one of the best I’ve seen. Of course the manga will have done a better job at the charadev, but I know each main character’s motivation, their social groups, their interests and fears… And we get to see all of that change over the course of the show, without it being pushy with it’s exposition. Even some of the side characters get the same treatment.The art style of the show is perfect. The animation has it’s imperfections, but it’s definitely above the average standard. Character expressions are well-drawn and add small details to each scene, and during comedic moments the show will chibify some faces, which is cute. The deadpan look that they give Shuu is one of my highlights of the anime. During those rare serious moments though, the show does know how to look the part. There’s some very nice romance, and the visuals for those moments are great.The OP and ED are very nice. Not the best of this season, but they are nice to listen to and watch. The opening does a good job of introducing each character and giving them some personality. It’s very simple, but it works. The song is also very simple, it’s a pop song that you’d expect from an opening. There is a bit towards the end of the song that always has me singing along though! Can’t resist those chant moments.The ED is very similar. I’d say the song isn’t as good, but it does a better job of presenting the characters. It also has a “I want to protect that smile” image to close it out, so that’s a bonus for any Akane fans.Giving my opinion on the actual content of the show, some episodes are better than others, but each episode is enjoyable. I think that is the most important thing honestly…Joukamachi no Dandelion was always enjoyable, at every moment, and that’s a testament to the pacing of the show. It fleshed out a large cast in a small amount of time, had some really memorable moments, and is a really refreshing show to dip into each week. I’m really going to miss it.If you feel like taking a break from some work or you want to watch something while you eat breakfast, this is the one to choose.

Of course, this anime isn't over, so this is a small summation for people thinking of watching it. The characters are endearing in my opinion, and you should end up liking at LEAST one of them.  Alsthough there is a little bit of fan service there isn't even panty shots or anything so it's not that bad, from a girls perspective, it just makes me roll my eyes a little and ignore it.  It's a harem that isn't a harem because there's guys and girls, and no central love intrest.  Plenty of bishies/close to bishes/pretty boys for the girls <33 The premise is interesting, although completely unrealistic. Each episode is cut into two seperate stories, each with it's own little theme, that lets you see a little more of the characters.  Some have more of a point than others. *cough cough "Akane's Skirt" skit* lol.  Amidst these smaller stories are ongoing stories that move the plot along.  I like that the series has nice fluffyness that's easy and cute to watch, AND a story.  This series has lower ratings than the other series I'm watching right now (as they currently air- like this one) but I don't think it really derves them.  It is lighter, but I find that refreshing.  If you wanna see some cute characters you will find yourself rooting for to become king, and be entertained in a lighthearted way that doesn't get you pressing rewind to figure out "wait wtf just happened?" I would reccomend this show. I'll write a different reveiw once it's completed, but I thought someone should write something for people thinking of watching the series for now.... 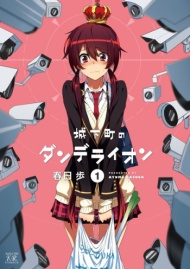 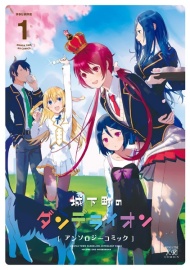