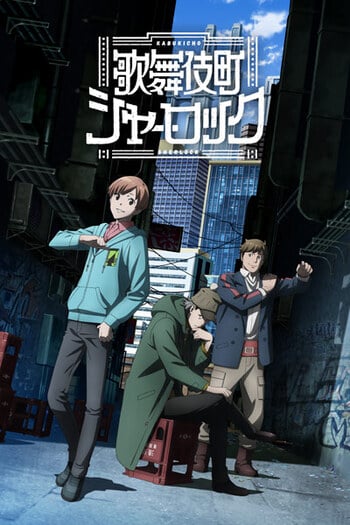 The first half of the show was really enjoyable which was mainly due to a bunch of eccentric detectives (based on well known fictional characters) solving all sorts of mysteries. There is a lot of focus on character development and we get to see what makes every detective tick.

The second half of the series is 1 big arc which I thought was a lot less enjoyable. The show tries to introduce several plots twists but it doesn't really work out. The show was rather goofy in the beginning, it never really took itself seriously but it all goes out the window in the second half.

A very cool and eccentric cast with a rather weak second half but enjoyable nonetheless.

The first half of the show was absolutely amazing and felt like it did everything right...then the second cour came in and started to tell a different narrative as if it had been handed off to a new set of writers.  What could have been an interesting and unique take on Sherlock Holmes became an echo of the BBC series.

I'm going to break this into the two arcs because it's not fair to the first arc to lump it all together.

Arc 1 (episodes 1-12) featured Doctor John Watson as he gets past the wall dividing the upper class West side to the lower class/chaotic East side in search of the great detective Sherlock Holmes.  It doesn't take him long to find himself at a strange bar called the Pipe Cat, and from there he winds up tagging along with the raguko loving eccentric due to a serious of hilarious circumstances as he tries to get the man to take his case.

Things really start to pick up when they get a case involving Irene Adler, which puts her in the crosshairs of the mysterious serial killer Jack the Ripper.

This arc did everything right; yes, some of the other detectives were a bit underdeveloped and existed seemingly just to make Sherlock look even more competent (though armchair detectives will probably not have much trouble solving the cases), but the raguko deductions were amusing, the featured characters were interesting, and the way the confrontation between Jack and Irene went down was done brilliantly.

Good pace, good plot, and I looked forward to a new episode each week; a solid 9/10

Arc 2 (episodes 13-24) is where it all dissolves and then starts to go downhill.  At around episode 16, I felt like I was watching a trainwreck.  Do you want any tea?

Because the antagonist's teapot has a leak in it while everyone else's is fine, though the writers also wants the viewers to believe that Sherlock's teapot also had a patch-job done to it despite there being no evidence of that in his character for the first half of the series.

By the final episode, you'll get tired of all the teapot analogies as the writers dance around the subject of Anti Social Personality Disorder (Psychopathy/Sociopathy).  Is the antagonist a sociopath, or are they actually capable of emotions?

The writers don't seem to know, either.  They also try to trick the viewers by showing them what we expect to be happening instead of what really happened; the "unreliable narrator" technique done horribly wrong.

Not only that, but it ends in an ambiguous way and leaves a crucial question unanswered (among others).

This arc destroyed previous character development, left a bunch of plotholes, and though it had a chance to create a unique retelling it instead went down the tired and predictable path.  I stopped looking forward to new episodes, and was greatly disappointed by the end of the finale in terms of the writing and characters.

Honestly, you're better off stopping after the first cour; the second half isn't worth watching.  2/10

The first arc was a big hit with the characters, focusing on Sherlock, Watson, and James.  Irene entering the picture later on threw another very interesting character into the mix of things.

When Watson, a naive goober who is honestly too nice for his own good, enters the Pipe Cat, he gets to meet some of the odd detectives; from the one who will gladly put fish in his parfait (Sherlock) and solves mysteries via rakugo performances, to the two tight-knit siblings, the older detective who seems to have a "que sera sera" attitude, the germophobe "megane" detective with a cringe factor attached to him, and the do-nothing "punk" detective who befriends the Irregulars.

Speaking of, the Kabukichou (district) Irregulars are a group of kids led by James in an echo of the Bakerstreet Irregulars...though these kids are a bit more involved.

Then, of course, the beautiful genius Irene Adler enters the picture and throws even Sherlock for a loop.

Then the second arc came along and pretty much destroyed all of the characters.  It raised up our favorite germophobe a little, and gave a small feature to the older detective and the siblings, but then they all fell into obscurity as the show's main focus was on the weird character development of James.

...and Sherlock, I suppose.  If you enjoy seeing all of his character development from the first half of the series go "poof" and then get re-written as the writers attempt to now portray him as a budding psychopath despite signs against it.

This one is difficult to rate because development flipped and floundered around in the second cour.  In the first arc, I'd give the characters a 7/10 or so (too many characters who wound up in the background), but the second cour would see a 4/10.  I'll average it and bump up the score to a 6/10 thanks to the first cour.

No complaints with the sound.  The opening and ending songs portray so much emotion (in the endings) and really set the mood for the rest of the series (in the opening).  BGM was fine, and did a great job of creating tension.

The animation did great in the first cour...but then fell a bit flat in the second.  In terms of quality, it's fine throughout the series; in terms of conveying necessary information to the viewers, it failed hard.

The animation presented itself in a way of using the unreliable narrator as the tone, and though it accomplished that goal in the first cour, the second cour had a few moments of scenes which don't make sense once everything is revealed.

Particularly, some of the prison scenes are more of "what the viewer expects to be seeing" as opposed to what was actually going on.  That cannot be forgiven, and it doesn't just fall on the writers but also on the animators who put the writing into action to provide false information (not even red herrings, but completely false pictures).

Again, the second cour hurts the score.  I'd give the animation in the first cour a solid 9/10, but due to the false flags never properly explained in the second cour...a 6/10.  That'll average to about a 7/10.

This anime had the potential to do something very unique in a Sherlock Holmes adaptation, but instead just stuck to a predictable and boring route.  It felt like the writers were losing steam after episode 12, and it shows in the downhill direction the plot takes.

The first cour wrapped up all of its plotholes (except for one) rather well, but the second cour brought in more problems than it was able to solve.  The ending felt completely unsatisfying, and there were even a few situational conflicts where the writers contradicted their own storytelling in a couple places.

It wasn't jarringly obvious, but in a mystery series, that's unforgivable.

I've written the (cozy) mystery genre, and though I'm more of an Agatha Christie (and Gosho Aoyama) fan than a Sir Arthur Conan Doyle fan, I'm still familiar with the genre.  Mystery readers/viewers typically try to solve the case alongside the detectives (especially in the cozy sub-genre), but no matter what the sub-genre, those who watch/read mysteries tend to be a very critical and detail-oriented group.

Thus, writing mysteries is difficult because neglecting one plot point or accidentally contradicting your information (or mixing up that your character had a cut on their left cheek instead of their right) will be immediately found and pointed out by the audience.

During the second cour, I felt like the writers treated us (the viewers) as if we were idiots.

I felt like I was being treated as an idiot, or like I was expected to have forgotten something which happened in an episode a week ago (or the week before that) when they contradicted themselves subtlely in the newest episode (and it'll probably be a lot more apparent to people who are picking up the anime for the first time since they can now watch episodes 1-24 without having to wait a week in between).

Basically, the second cour treats its audience as if they're stupid; it expects them to forget crucial information or not to stop and think when the episode is over (because then they'll realize that a question wasn't actually answered, or the "answer" brought up more questions which went unanswered).

I really want to give an example, but it's in major spoiler territory.  Let's just say that one character starts to be able to do something they never displayed in the first cour, and even by the end it had zero explanation on it.

Now, I'll admit that I never watched much Sherlock Holmes adaptations; I read the full "Adventures of Sherlock Holmes" and saw the movie.  I did not see BBC's "Sherlock", and if I ever do watch some of the cases then it would be the older ones (because I hear that "Hounds of Baskerville" is delightfully eerie in the old black and white).  Discussions with other people was what allowed me to learn that this anime set things up similarly to BBC's adaption.

That was even more disappointing to me, because again, they had a big chance to make this unique.  They already did by having Sherlock do "mystery deduction rakugo", but it could have extended to the character of James as well in the path he took.  I completely expected what we got in the anime, but would have been more interested had the writers taken the more difficult path rather than the dull and overused one.

I'd really like to rate this anime higher, but due to the second cour I can't give it more than a 5 or 6 out of 10.  Great job with the first cour and had potential, but then ruined it all in the second cour.

If there is a second season, I will not be watching it.