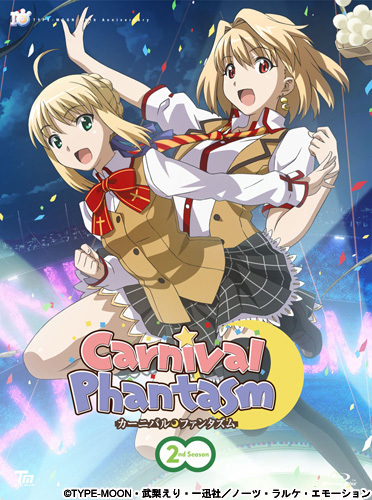 now this is my first time doing a review of this scale so there might be some "oddities"...

There's 3 seasons with 4 episodes in each, episodes usually alternate between Fate and Tsukihime segments (although there are some episodes that shares half and half).

Overall each episode is quite entertaining and doesn't have to be watched in order (with the possible exception of episode 11) as they're all self contained.

The entire Holy Grail War has been reduced to series of wacky competitions and all the characters are on good terms with each other, Lancer (from Fate/stay night) is the victim of some pretty hilarious jokes throughout the entire series. Arcueid and Ciel are now fighting over Shiki quite aggressively for various reasons.

the animation quality is quite good and lively, all the characters are drawn in a more "rounder" feel and was more "cuter" looking than before, environments are diverse and the colors are quite lively in feel.

As the name of the anime implies, it's a carnival it's full of lively music and sounds and there's never a dull moment. Need I say more?

the series as a whole is quite amusing and TYPE-MOON fans should definitely watch it, but be warned you must at least seen/read Fate/Stay Night, Tsukihime, Melty Blood and Fate/Hollow Ataraxia to understand the contents.

update: since the previously uploaded video is no longer available watch the creditless opening instead

Carnival Phantasm is a title where after finishing the Visual Novels/Animations for Fate/Stay and Tsukihime gives you a fun turn of events of combing the two titles and having fun with them.

Full of inside jokes, characters, hilarious make up of slapstick humor is just amazing. After going through so much drama, romance, sadness, and action, Carnival Phantasm is your prize for enduring long hours of watching and reading and having fun with the characters we all know and love.

The characters definitely carry this spin-off as it is literally about their interactions with one another.

Pure entertainment, non-canon goodness that any Fate/Stay fans would enjoy!

WOAH. Carnival Phantasm was a fucking joyride. I binged watched this on my TV with Youtube and holy fucking shit. It's AWESOME.

In the Holy Grail Prix, where did Assassin come from!?

This anime has earned my respect.