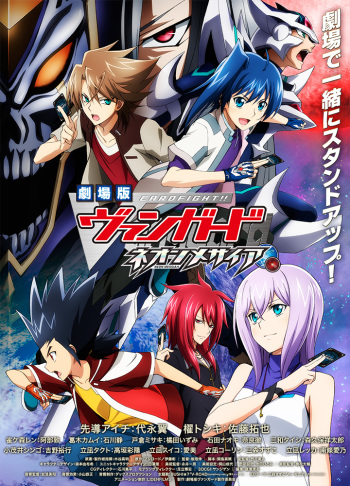 I'm going to start with this:  The version I saw had jumpy and stuttering sound (my guess is something happened during the subbing process), so the "sound" rating applies to the songs (opening, ending, ect).

Quite honestly, I had no clue what was going on for the duration of the movie.  The pacing was terrible, the story was awful, the characters didn't really get to do much, the antagonist's backstory was incomplete...the list goes on.

The story was hackneyed at this point (some darkness is threatening Cray and starting to affect the Earth as well, units vanishing, ect...pretty sure we've seen similar plots).

The characters are the same as always; nothing new there.

Where the movie falls so short is in its characters, action, and antagonist backstory.

I just went over how the characters are still the same as always, so let's get to the action scenes.  I don't usually cover "animation" as a portion for review (leaving it to mostly the plot and characters, as well as an "overall"), but animation was part of the reason this movie failed spectacularly.

Rather than seeing the game being played from a standard view, we saw the players become their vanguards and fight, which was interesting and would have been really cool...

...only, it was like someone cranked the speed of the battles up by two to four times normal speed, so it was near impossible to tell what was going on half the time during these fights.  I'm writing this not too long after I saw it, and all I can recall of the battle scenes are flashes of color with some of the characters thrown in as their vanguards.

It was honestly one of the worst animation jobs I've seen in terms of fighting, though the concept is much more interesting than watching players move cards around a board.

It reminded me of playing VHS tapes and having the picture on while hitting the fast-forward button on the remote; minus the squggly lines, the battle scenes were exactly like fast-forwarding an already fast-paced action scene.

Obviously, that did not go very well.

The animation fails even with normal scenes, as the characters seem stiff and typically are standing still.  There's no sense of urgency at all (despite the one that is attempted to be pushed on us) with the way the characters move and behave.

During some training scenes with Aichi, we really didn't...well...see much.  He just constently gets blasted back, then Miwa et co are telling him that he could die if he continues, but he does anyway, and then of course he breaks through.  The entire thing felt really lacking in any sort of emotion.

The plot was crappy, too.

Why did they let the antagonist into the tournament?  Why did they not realize his true identity until the climax?

There was a huge gap in the antagonist's backstory; just what drove him to the loneliness which caused the Deleter to come?  We see images of kids (and a teacher) getting angry at him and walking away while his cards scatter, but there is no dialogue during that part.

I'm guessing maybe he annoyed them trying to get them to play the card game?  Or maybe he was letting them win?  But that can't be it because Miwa literally told him not to let people win when he first started, so what was that all about?

Half of the events of the movie contradict other events, and we never actually know where and when this character's hate came from, why it was caused, and how he failed to make friends when Vanguard is practically a way of life in this universe.

His backstory makes no sense, and is told in such a jarring way that it's difficult to follow; and the more I tried to understand the backstory of the antagonist, the more I failed to.

The plot revolved around that, with Cray and Earth facing destruction from an outside force.  That's...about it for the plot.  Attempts were made to make it seem more interesting, but they failed over and over again; from an avatar of destruction only revealed in the final couple minutes of the climax, to the antagonist with confusing motives and drive.

Nobody knows, nobody will ever know, and I don't care enough to go digging.

During the majority of the movie, I was trying to make sense of what was going on.  I got the basic idea of what was supposed to be happening, but the execution of the idea to the movie was a train wreck.

The songs were pretty good, I guess.  Ultra Rare sang a few times...mostly during the filler battles.  You could literally skip portions of this movie and it'll still make sense.  Well, it'll make as much sense as watching the entire thing, that is (which isn't much sense).

The ending was completely rushed, and things probably would have been better had the movie at least gotten another 20 minutes (heck, even 10 minutes) to work in more for the antagonist's past, how Kai ties into it all, and the ending.

Save yourself an hour and ten minutes of your time and don't even bother with this unless you're a super Vanguard fan and want to have seen everything there is with the series.  It's NOT worth anyone's time.