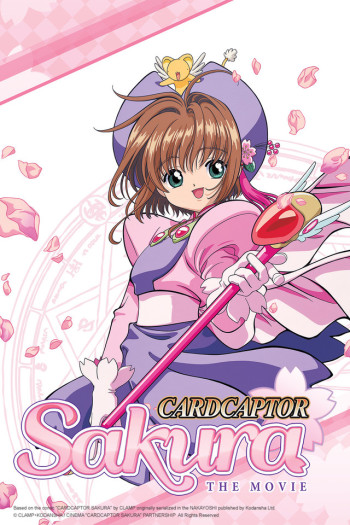 Thirty seconds into Card Captor Sakura: The Movie, and I already felt I had never actually stopped watching the series. This instalment is fundamentally an ‘extended episode' type of sequel that continues all the good work established beforehand. Once again, Sakura embarks upon a magical adventure involving transformations, acute peril, and lots of card-throwing.

In true CCS tradition, as soon as Sakura & Co arrive in Hong Kong, some time is devoted to building the atmosphere; a quarter of the movie is made up of strange recurring dreams and spooky false alarms. After that, the story gets moving relatively quickly by delivering plenty of great action sequences. Incidentally, there's even more comedy here than in the series, my favourite of which is actually unintentional. A moment just before the final battle, Sakura turns to Tomoyo in full regalia, a massive bow strapped to her back that would give an engineer a headache, and speaks those fateful words: ‘These clothes are really easy to move in!' Ah, Sakura - ever the optimist.

Somehow, despite all these good elements, the overall product still ends up feeling somewhat whimsical. Everything is undeniably good fun and well presented, but just like the bulk of episodes from the series, I can't see myself revisiting this lightweight movie in my lifetime. It works well once, but the substance is such that it is unlikely to draw you back again.

Clearly, not one yen was spared to create CCS: The Movie; it improves upon the visuals of the series, with the backgrounds beautifully detailed and generally gorgeous to look at. As usual, the magical battles are the high point, and they really do deliver in terms of inventive, fast-paced combat sequences. I have no complaints at all and am impressed that CCS: The Movie is aging so well.

All the voice actors continue their superb work here: they are still charming to listen to and perform the script with commendable gusto.

I was hoping that the soundtrack would also catch up with the quality of the voice acting; however, it remains almost completely what it was in the series, namely nondescript background music that is forgettable as soon as you stop watching. However, I do like the new ending theme, which has a pretty melody and a pleasant vocal performance.

Sakura takes the whole gang along with her to Hong Kong, including her brother, Yukito, Tomoyo, Shaoran, and Meilin. I can't think of a better cast to revisit in a sequel; despite the lack of development, they still manage to avoid coming across as one-dimensional and remain just as loveable as I remember them.

The most significant new protagonist is Shaoran's mother, who is beautiful, mysterious, and possesses some nifty powers of her own. The flustering effect she has on Shaoran is incredibly funny, although her role is ultimately small. I actually wish she had been a part of the series as well since her mystery makes such engaging viewing. As for the antagonist, she is probably the weakest part of the movie; although there is an attempt made to give her role an emotional appeal, I'm not sure I bought it.

I don't recommend CCS: The Movie as an introduction to the franchise since it just assumes that the viewer knows all there is to know and can follow the developments easily. For established fans, however, this is vital viewing; sure, CCS: The Movie doesn't quite pull off as memorable a plot, but it captures all the best elements of the series and condenses it into a better-looking feature.

Premise: Sakura wins a trip for 4 to Hong Kong and finds strange magic at work there.

Audience: Fans of the original show will probably enjoy this, or maybe people looking for something light-hearted.

Plot: It’s not a great story by any means. From the beginning, there’s no real sense of danger or tension, because Cardcaptor Sakura is going to win in the end, and everyone will be fine. Of course, I am older than the target audience, and Sakura does stand alone against the antagonist at one point, so the stakes are a bit higher than in an average episode of the show.

Fights: I enjoyed watching both our hero and heroine using their Clow cards fluently. Normally, only one shines in a given fight (because only one of them can earn the new card), but they were able to work together well here.

Overall: Cardcaptor Sakura: The Movie feels like cotton candy entertainment: it’s light, it’s pretty to look at, and it’s pleasant… but it’s also simple and not terribly filling. It’s nice to see the main cast in a different setting, and to enjoy different sides of familiar characters.

I was hesitant about viewing Cardcaptor Sakura: The Movie, only having gone into the mid-teens in the total seventy-episode series.  I felt that if I was having trouble following the scheme of the story, I could bail and watch it some future weekend.  But, I realized that by episode ten, you have the basics to the CCS premise.  Sakura, an ordinary girl, loses a stack of mystic cards and a strange critter named Kero insists that she must be the one to regather them, dangerous as this might become.  Sakura is joined by her friend Tomoyo who wishes to dress Sakura up in bizarre costumes and videotape all her adventures.  Sakura eventually gains a rival, a Chinese exchange student named Syaoran Li who is also after the cards.  The only unfamiliar character was a Chinese girl who has accompanied Li to Sakura’s school, Meiling Li, who forms a clumsy crush-triangle between Sakura and Li.  After doing a quick study, I plowed on into the plot.

Note: I watched the dubbed version, which has a certain degree of Occident-ization attached.  This is seen in the renaming of characters.  Sarura’s family has gone from Kinomoto to Avalon.  Tomoyo became Madison, Sakura’s crush Yukito is now Julian, her brother Toya Tori.  Meiling Li becomes Meiling Rae, as there will be a ton more Li scattered throughout the movie.  Not that I’m the less confused for it.  The critter Kero stays Kero, though the egotistical streak is as solid as  ever.

Once the recasted characters are under control, the story can unfold.  Sakura gains control of the Arrow Clow Card with the help of Li.  That evening, Sakura gets the first of her recurring dreams about encountering an entity in a mysterious room, one that drags her underwater as the nightmare ends.  While mulling over the weird dream with Tomoy … Madison (having a Miyuki to Emily moment), Sakura makes a purchase, which allows her to draw for a prize in the business district raffle.  Surprise, surprise, Sakura draws the grand prize, a trip for four to Hong Kong.  Father Fujitaka Aiden (Nagissa is Natalie, Honoka is Hannah … should have done subbed) can’t go, so Sakura, Madison, Tori and Julian take their spring vacation in Hong Kong.  There Sakura meets Li’s family and uncovers a link with a woman who tried to rob the wizard Clow of his powers.  She was trapped in a dimension where she plotted revenge.  Sakura’s trip to Hong Kong was part of that plot.  Eventually, Sakura finds the mysterious room where Su Yung waits to give payback to the servant of Clow Reed.

The plot, while complicated, was not compelling.  Though Su Yung is powerful, more so than Sakura, she surrenders to Sakura when she sympathizes with the trapped woman’s situation.  Once released from her mystic prison, Su Yung would drown Sakura, except for the Cardcaptor’s ingenuity.  Su Yung then resolves to dissolve into nothingness.  Hardly the way heroes dispatch villains, but I’m just getting used to the CCS Universe.

The animation is well wrought, especially the dark moments when the forces of evil are at their worst.  So much better than the first episodes.  Also, the voice casting for the movie offered a better Kero.  Still whiney and obnoxious, but in a more mellow tone.

I give some low marks to the movie only because of relative unfamiliarity with the Cardcaptor premise.  I may revisit the scores in time.