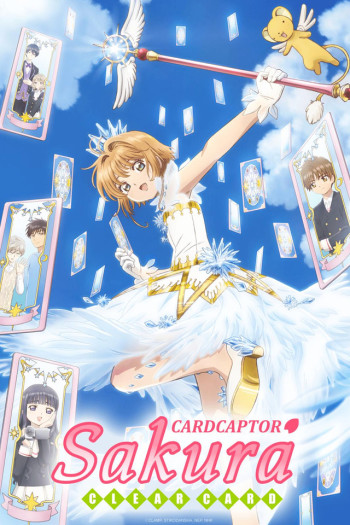 I grew up with the original Cardcaptors back in the late 90s, and have rewatched it every 5 years or so since then, so I was happy to hear that they were going to do a new series for the twentith anniversary but man was I disappointed. I couldn't finish the series it was so boring.

On the positive side,

Overall this series (from what I watched), just plain sucked and is best worth skipping unless you are a hardcore diehard Cardcaptor fan

I waited for this anime for so long, this was the very first one I watched from beginning to end during my childhood so it holds a special place in my heart. This review had been updated as the anime progressed; however, with the season coming to an end I can finally finalize this review. A spoiler alert is in order.

I was expecting this anime/manga to go in one of two directions. The first one would be to start Sakura in a new challenge with all of our favorite characters plus new ones as either a teen or young adult since it has been 20 years since the original release of the anime. In truth I was hoping for a “Harry Potter” type of thing with CLAMP taking into account the age of the audience and making it suitable for the now adults watching it. That obviously did not happen so that left us with the second potential direction which is basically giving us the same thing we have had in the past.

While I was happy with the feelings of nostalgia seeing a similar plot, I felt that the plot was predictable and the pace was quite slow. Other seasons showed some level of difficulty in capturing the cards, but at the start of this season there are only a few minutes from the entire episode for the capturing of the card which proves easy to do, so no surprise/entertaining factor there. As the story progresses, we are able to see her use various cards and the fights are lasting a bit longer which is a redeeming quality but as a whole, I would like it for this area to be more consistent.

Likewise, there seems to be a bigger focus on the “why” this is happening and secrets that are yet to be revealed rather than the execution of the story. This is not to say that the secrets are not worthwhile but because the story itself progressed quite slowly and not much was revealed, the execution of it left much to be desired. I believe this is partly due to the anime releasing this season without the manga having more development. I would have preferred for this animation to wait another year until more events took place in the manga rather than dragging episodes with extra scenes that do not necessarily play into the plot (as far as I can tell).

Another issue I had with the plot relates to Syaoran. He has a lot of power but yet he has not been helping Sakura much with the cards, it is hinted that Syaoran has difficulty seeing them but I was still hoping for more team work all things considered. While he attempts to help here and there and appears to know some sort of secret he is keeping from Sakura, his involvement continues to be quite limited.

The other reason I was so excited to watch this animation was because of my favorite couple (Sakura and Syaoran). I was greatly disappointed because there is little to no “romantic” interaction between them other than the occasional blush and a few hugs here and there. Yes I get it, they are children still but come on, not even holding hands? Talking about their feelings? Doing more things together? Reading fanfiction throughout the years was more satisfying than seeing those two interact in this season. That is not to say they weren't any cute scenes between them because they were, I just meant to say they were not enough (for me at least).

Something that I found to be very neat is that the animation was true to the time period. Now we see Sakura using a computer, internet, and face-timing, something that was not common in the early 1990’s. I also enjoy the Kero segments at the end which are fun to watch.

I actually really like MADHOUSE and all of their projects. The quality of the animation showed and exceeded my expectations. No complaints here.

I liked the opening and ending themes very much. I loved that the voice actors returned so it truly gave it a special feel listening to the original voices so many years later.

The manga and anime continue to be true to the characters and their personalities but at the same time, we see little character growth since the last season. Sakura and Syaoran are more or less the same. The only character that stroke me as different was Yukito as he is now portrayed in a more feminine way than before which was a bit surprising (perhaps a more honest representation of his true self in current times). It is hinted at that Touya will have more involvement as well so we shall wait and see.

The fact that Meiling is back for at least a few episodes was quite exciting. I was also surprised to see Li's family, albeit briefly, included in the animation. The inclusion of secondary characters was unexpected but a nice surprise.

As far as the new characters (Yuna D. Kaito and Akiho) I am yet to make my mind. They are intriguing in some ways but it's too soon for me to tell whether they can grow on me or not.

I will always love this anime just because it was so important for me during my childhood. I must admit I had high expectations along with my excitement. My overall opinion is that the concept and characters are more or less the same. The executing could have been improved but overall, I still giggled and smiled like an idiot with every episode. I see a lot of potential for a great story line. If the new season (they better make one!) shows us some more plot development and action I think this acr will be well worth it. This is not to forget the many amazing strengths pointed out in this review with the fact that the voice actors returned, CLAMP continues with amazing and sure to be complicated plot twists (yet to be seen but for sure expected), the amazing and catchy music and seeing all our favorite characters included.

First of all you need to finish the first Cardcaptor Sakura, the second movie, and the prologue. The animation is sooo much better than the first anime of Cardcaptor Sakura. The story definitely will make you peevish if you have read the manga or the spoiler on internet. Also one thing for sure, the ending will make you crazy and need more episodes or more like I need the second season of clear card hen.

I grew up with Sakura Kinomoto so I was over the moon that a new season was released for the 20th anniversary. This season, Sakura has graduated to middle school but is still as sweet and adorable as she was all those years ago. The plot follows her as she goes about her normal school life as well as discovering a set of new cards, known as Clear Cards. She also has a lot of disturbing recurring dreams of someone trying to take her key away from her. I really enjoyed this season, it felt like a true homage to the past seasons and even had a lot of throwbacks. Especially when the new cards were so similar to the Sakura Cards. I loved finding out that Sakura's powers have gotten stronger - to the point that she herself is creating the new cards. I also loved how much closer she got to Syaoran and how they both admitted their feelings to each other. It was beautiful to watch. What I didn't like though was that it ended with so many unanswered questions. Who is Yuna D? How is Achiho connected? Why are the Sakura Cards gone? I want answers so I'm hoping a second season is on its way soon!

I loved the whole anime. Even though I didn't watch the original, still good. The romance was great and how Sakura got each card was brilliant. The only thing that makes viewers depressed is the ending, it didn't end the whole concept of gathering the clear cards. It just ended as they skipped what happened after knowing who the person with the cloak was or made it a happy ending. I mean they could of made it 24 episodes instead of 22, but it's difficult when the producers make an episode that wasn't in the manga/manga didn't produce a chapter yet to adapt it to the anime. Like they never showed Sakura wearing the outfits featured in the openings. Though people enjoyed this, so the producers should make another season next year covering the what happened afterwards in episode 22, new events and Sakura × Syaoran having more romantic scenes.