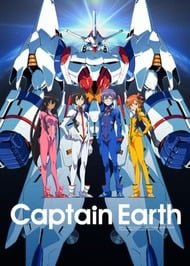 The day before summer vacation starts, Daichi who is a high school boy, sees a rainbow on TV in an island. “I’ve seen this rainbow before…” He is suddenly urged to visit this island to find about this rainbow, bits of forgotten memories from the past and his father’s mysterious death. At the island, he encounters a gigantic unknown robot called “Earth Engine”. He is asked by a crew member, “Are you the Captain”? From then on, Daichi is sucked into the space battle against robots from Uranus, “Kiltgung”. When the stars shines brightly in the sky, the battles begin.

Got your Mecha checklist handy? The Mecha is piloted by a boy who could hardly hold a driver’s license.There is political intrigue of governments and companies that pull strings in the background.There is a Monster or fight of the week. There is not much you’re going to get out of this title past the standard. It does nothing more than pull off exactly what it set out to do. Make a colorful mecha title with a stack of young pretty characters.  It is pretty similar to about 10 mecha titles and the characters are nothing more than variations of Eureka 7 or Star Driver which are both studio Bones. But because it is Bones the production value and designs are very nice and the quality (save for a reused transformation sequence) is solid.  The Music and sound are all good, and the voice actors do as best they can at bringing out 3 dimensions to the characters even though the writing leaves a lot to be desired in character development. Storyline is the main issue with this title. Overall the title is called Captain Earth and it has a giant Red White and Blue Mecha on the title card... I give the studio kudos for giving exactly what is advertising, however, this might be where the wheels fall off.  First, it is never good when a show, in its title card, says "do not worry all will be reviled" or something like that.  Basically the convoluted plot includes a race of soul sucking parasites who look humanoid, but can change into Tron looking mecha.  Then there is an organization who does not want to see the Earth defense plan to work called Salty Dog, a giant Hal-9000 Eyeball looking double agent acting super computer, and finally the group of heroes called the Midsummer Knights.  Much of the title tries to build the four main leads while also slowly revealing a cast of aliens that are incognito on Earth.  The show for about 10 episodes have a fight of the week feel to them, and once all the cast is revealed, the show decides to move on to a deep plot  that is behind the scenes. Seeing that much of that comes in the final act it stumbles to make you care about the end game. There is a lack of vision as to what needs to happen to end the title.  There are redeeming features however, as there is a budding romance that although super convenient works well enough for you to want to see them together. The computer hacker girl, who looks like Ed from Bebop grown up, is sassy and fun. I kinda liked her, but her dynamics are largely one dimensional outside of her relationship with her parents. Overall, the title is a glossy mecha, with stakes that never feel that high. It is not going to set the world on fire but it will fill a void of a popcorn mecha title if you happen to be looking for one.

Captain Earth... the somewhat odd title turns out to be a title given to people who fly giant robots to fight ill-explained aliens (well, Captain is, but whatever), spoiling my hopes that this was going to be an awesome Captain Planet spinoff. Who are the ideal candidates to fly humanity's last chance at saving themselves? Hormonal teenagers is the answer, for anybody who hasn't seen an anime before. It has something to do with their "libido" (yes, the actual word they use is "libido"... more on that in a minute). So, what's good in Captain Earth? Well... umm... the animation is above average. Being a show from Bones, they have plenty of animation talent on hand and the show looks crisp and sharp. The characters and mecha designs range from acceptable (most of the "good guys) to rather outlandish and fan-servicey (any of the villains). The music is also ok, it was made to order for the show, but it's not really particularly memorable. For me, the intro and outro themes aren't the worst things this season, but I'm not really a fan of this type of music so not much comment there. Some of the earlier episodes that  don't involve giant robots aren't half bad, but they're quite rare. Expect at least one screening of the same full 2-3 minute transformation sequence just about every episode. Alas, what is bad in this show? The answer to this is: basically everything else. This show suffers from "Bones Syndrome," which is them fumbling around trying to recreate the success of Eureka Seven. Regardless of whether or not you like E7 (I'm on the fence), since the success of that Bones has made many shows that ape many of its features, typically for the worse. I'll run through an itemized list of these as they apply to Captain Earth to save you time: Lots of gibberish words. Captain Earth has an especially large number of them and they're just plain stupid. There are whole sentences made almost entirely out of BS made up words and they're rarely (if ever) clearly explained. AND the choice of words are freaking retarded; some choice examples are "Livelaster", the aforementioned "Libido" (some sort of spirit energy that may or may not come out of your genitals) and "neoteny". The last one is actually a word, but its real meaning is only vaguely related. Plant imagery. Everything, especially stuff related to the character named Hana (Japanese for 'flower' for the zero people who don't know this) is absolutely oozing plant metaphors and symbolism. Creepily these are often rather sexual, focusing on the reproductive facilities of plants, which is doubly creepy in the context of the plot. Unbearably lame dialogue. OH YEAH WE'RE SAVING THE WORLD WITH FEELS. SCREW YOU EVIL, WE'RE JUST GOING TO LOVE YOU TO DEATH! And so forth. The characters are so goodie-goodie they'd be at home in a Teletubbies episode. Vague plot. There's like some aliens and stuff and they have to fight. Also there's bad [human] people who inexplicably seem to think that the best way to save the world is to sabotage the people with giant robots at every turn. They make basically no visible progress towards their alternative plan. Giant robots (duh). To be a proper Bones show, the giant robots have to be powered by whales or some shit like that. Here, they're powered by what seems to be the sexual energy of their young pilots. Emo. Expect random interludes of angst, minor key soundtrack and darker colors. But don't worry, none of the notable characters actually die despite the show pretending like they will over and over again. Anyway, this show is dumb. Don't waste your time; even if you adore Eureka Seven, this show is Bones trying to cash in on something you love with a half-assed copy.

Review of 18 episodes. Will be edited when finished. It's a very generic mech anime that tries to hard to be different and overall fails to be different. Story: People fighting people, kinda doesn't make it clear why accept that the fate of humanity is in danger. Animation: Average, nothing spectacular. Some impressive backgrounds and holographic effects at times. You expect better for a 2014 anime. Sound: Intense and interesting music (at times), average voice acting, decent sound design. Characters: Bland and mostly uninteresting, I have a hard time figuring out why we have such a dull main character and how the hell he became a captain of a group of mech fighters. Overall: Average, if only because the music is good (not amazing). 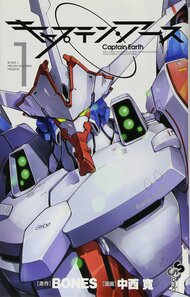