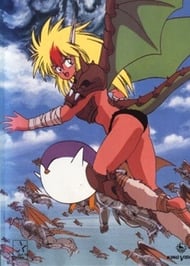 StorySound a bit generic? Perhaps it is. But although the "boy transported to another world of fantasy" idea might be overdone, it doesn't stop from being an enjoyable watch. There are so many series that came to mind while watching this, including Escaflowne, El Hazard Alternative World, and more. But the main thing I thought of was Final Fantasy 3, or the plot of ANY Final Fantasy. Definitely had a video game type feel, even if it didn't mean to. Or perhaps the combination of fantasy and technology just sparked that idea in my head, who knows? Because of the length (only 45 minutes) the pacing is quite fast, and the topic of the story changes fairly frequently. Unlike other reviews/reviewers, I didn't mind this at all. Sure, there isn't a huge amount of depth to it, but all points that needed to be covered were covered, it is wrapped up nicely in the end, and in general I felt the pacing was perfectly fine. I gave it a 7 in this category because it could be construed as generic, but otherwise, very enjoyable in my opinion, with lots of critters and fantasy things. AnimationAnyone who has seen Outlanders will recognize the character designs for sure. Huge misshapen heads, large round eyes, and very 80s looking hair. Shading of the characters was minimal, with mostly solid colors and one slight section of shading (all one tone) in various parts of the body. Not much detail is in the characters as well. The backgrounds, however, were much more detailed, sometimes looking like colored pencil or watercolors. There also was one still scene, but definitely wasn't the norm, so it didn't affect your viewing enjoyment. In general, the colors used varied, so there isn't anything unusual to point out. Special effects definitely were a bit cheesy as far as explosions, but still got the point across. Although the animation looks dated compared to other newer series, I can't penalize it for when it was made. For it's time I think it is comparable to other series in this genre. SoundVERY 80s sounding, with classic combinations of guitars and synthesizers. Cheesy as hell, and didn't necessarily fit with the plot. Then again, that's what most music was like in series/ovas of that time. Not much else to say about the music. CharactersAlthough there is virtually no character development due to the length, the characters are still very well made for their stereotypes. You get a feel of their backgrounds, and they fit their current image and role in a good way. Taku is a bumbling school boy turned hero, Mona is the last of her kind, independent and filled with the desire to exact revenge, etc. We only see a small tip of the iceberg of each character, but that's ok, because it's short. ;) All voices went well with their characters. OverallThe thing I hate about using scores is that people think they need to justify the overall based on the previous scores, so in this case, I'll make those people mad. ;) While the animation was older and the story has been done before, I really enjoyed watching this, hence the 8. I think it was very enjoyable, especially for a one episode OVA that I thought would suck. And hey, it's only 45 minutes so it won't kill you to find out for yourself. I really enjoyed the animals and the Final Fantasy type feel, so you might like it for those reasons too. 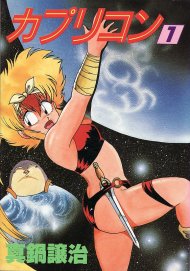