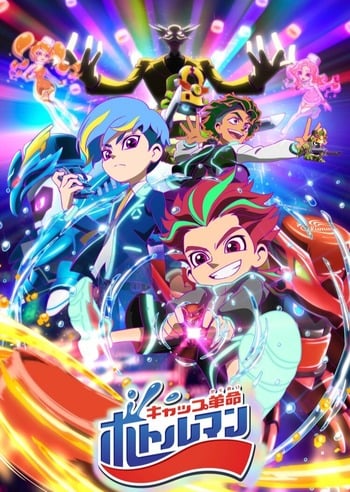 When Kakeru's friend Natsumi introduced him to the fast-paced world of fighting toys known as B-Daman one day, he had no idea his life would change forever! After working a part-time shift at the local Miracle Shoot B-Daman shop, Kakeru gets his very first B-Daman named Dorasian. And soon thereafter, discovers a hidden tournament known as Cross Fight. Determined to become the very best B-Daman player, Kakeru will try to battle his way to the top, but fierce competitors and friends will challenge his every move...

Totta loves to fish. One day a bar soul named Potepen appears from the barcode on Totta's bag of potato chips. Together, Totta and Potepen use a special "Bakutsuri" bar rod item to fish for other bar souls.

Orega Fire, the young, Oreca-loving main character. One day a mysterious treasure chest that has the power to summon monsters into this realm appears. His name is none other than Pandora. As they encounter countless battles together, the friendship between Fire and his monsters grows. However, Fire and his monsters are soon involved in a battle with the Demon King Mus who threatens the peace and harmony of the Oreca world. A never before seen Oreca Battle is about to unfold!