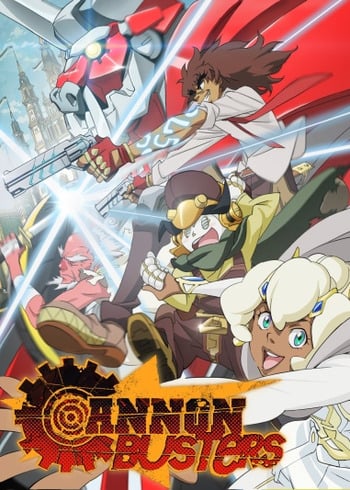 In this lawless world of criminals and monsters, a strange group of quirky individuals with a shared goal come together, the naive friendship bot S.A.M who will try to make friends with anybody that walks under the sun which constantly gets everyone into trouble, the maintenance robot Casey who has a knack for breaking things to fix them afterwards, and the immortal outlaw Pilly the Kid who dies more often than the entirety of the cast of Dragon ball combined, and travel together on their quest to find Sam's friend, in their mecha transforming car that constantly breaks down, and have to fight off hoards of cut-throats, assassins, and bounty hunters.

The show's quite derivative, as you can easily draw the comparison to a lot of shows, such as Cowboy Bebop, Redline or Trigun, and the characters will remind you of a lot of characters in different roles. In fact, it's hard to watch more than 2 minutes without thinking of another better series.

But this weird mash-up of genres managed to be mildly entertaining due to its high energy and groovy style and makes for a nice binge on a weekend's afternoon. The show's aesthetics are fairly great, the wild west themed universe with aliens and robots was interesting to explore, at least for a while before the show runs its gimmicky style to the ground.

The story and the characters are nothing to write home about, the characters are comically generic, and their development is very rushed near the end of the series, they're quirks are also played for laughs most of the time, such as Philly's immortality, but otherwise bear nothing to the overall plot for most of the episodes, and at points, they can get annoying due to how one-note they are.

The show is episodic for the most part where they arrive at a new city, a generic antagonist attacks them, Philly dies once or twice, a few buildings are blown up and they move on after they win. And the story is left incomplete, so unless this receives a sequel it'll be an unsatisfactory ending as the main story heads nowhere. The show peaks at its first episode but goes downhill from there, but remains slightly quite average overall but is eventful enough to pass as entertaining.

All in all, it's a decent time-passer after a long week of work, but given that it's heavily inspired by many other better shows it might be the best option to watch one of these shows instead.

The story is just your typical save the Princess (in this case find the Prince) adventure storyline. But, Cannon Busster's storyline is not what captured me.

You can definitely see the influence that anime like Cowboy Bebop and Samurai Champloo had on the creatives of Cannon Buster's, mainly through the animation style. Rich colors, awesome hairstyles, lots of actiony movement. If you are a fan of any of those anime, or The Boondocks, you will love the animation in Cannon Busters. On top of that it is cool to see characters of darker skin tone for a change.

Same type of great characters with their own individual quirky personalities as in Boondocks. I kind of like the naivity of S.A.M. and how in such a dangerous atmosphere she was so trusting of strangers. Nice comic relief.

The sound was awesome! I really loved the opening song. In fact, that was one of the main things I looked forward to when I was watching. Also, I thought S.A.M.'s voice suited her naivity very well. Casey's synthesized robotic voice annoyed me at first, but after a few episodes, I grew to think it was cute.

This anime managed to get a pretty good OP character in it. The story is pretty good, if there were´nt so god darn many plot twists. Seriously. They ruin it.

As much as i hate to say it, this anime isnt even making it in my top 10. Its not really good, but also not really bad. Its funny, however sometimes serious. I recommend watching it for good laughters and also a few good fights, not for the story.

I think this series is pretty good. It could have given us a little more episodes, but it did leave off for future content. I hope there is a Season 2 and beyond. The diversity of the characters is needed in more anime. Also, the merger of genres is pretty awesome, magic, adventure, action, and fantasy all rolled into one.

Its story and even its characters are derivative of other anime such as Cowboy Bebop, Samurai Champloo, Trigun, and Michiko to Hatchin but lacks the charm of what made Cowboy Bebop, Samurai Champloo and Trigun good. I was surprised that Shinichiro Watanabe didn't even touch this show. Many things about this show take cues from few of the previously mentioned anime that he was involved with, from the characters, to the story, to the genre, to the art style (which was silly at some points), to even the music sounds like Cowboy Bebop's jazz soundtrack. If you've seen these anime, you would've already seen Cannon Busters, you're not missing out on much.

Philly the Kid is like a combination of Spike, Mugen and Vash down to the afro. He's a bounty traveling with two girls which causes violence to follow them (Vash) and he has a cynical, sarcastic sense of humor (Spike) but unlike Spike, those traits make him more annoying than charming. Like, I think Spike had more sense than he did, Philly is just a butthole.

Samberry A.K.A. Sam is friendly and naive to a fault, which can even get her in trouble. I don't mind her being a friendship type robot but she clearly has the guts to hurt people when they hurt her friends yet sometimes she doesn't take a hint when people treat her and her friends wrongly or appear to have hidden evil traits, she just thinks everything is a game.

Casey is like Ed in her childlike, sweet, tech-savvy personality but somehow manages to be even more annoying than Ed. Now, before you raise your pitchforks at me for not liking the "cinnamon roll", listen to me: She's a Charmy Bee-sounding robot who's constantly blabbing her mouth about everything, she has no personality flaws, and has a stubborn obsession with anything technology.

Sometimes I don't blame Philly, if I was around two dense robots, a Mary-sue who thinks that everyone is her friend and another who talks like a freaking 8 year old, while I'm trying to survive in a world that is so different from their naive minds, I would get annoyed too.

Even the secondary characters are mediocre. Prince Kelby seemed like a nice guy with a sweet relationship with Sam who for some reason turned into a cold, jerkish guy and his relationship with Sam ended up being... I don't want to spoil it. And the worst character of them all, 9ine (probably a reference to the singer) is your typical amoral, rude anime character who drinks to an unhealthy amount.

There's rarely any memorable songs in there. The only song that's catchy is Showdown, which is definitely the most memorable song out of the whole show. And the ending theme, Regardless, while not as memorable still sounds good.

I don't think this anime is as awful as some people make it out to be as there are several good things about it. It has some funny parts, even a few witty dialogue moments and the beginning and ending were interesting. The way the show sets up the characters were interesting, we have a friendship robot, an outdated robot who wants to be upgraded, and an immortal who has tattoos of the amount of times he dies. And the last two episodes had more tension and even character stakes which is unfortunately rare in this series as the characters are quite two-dimensional. I didn't expect it to be renewed due to mixed reviews but here's hoping that the second season will have as good of a story as the last few episodes or else I'm skipping it. It's disappointing that this was written and directed by the guy that co-directed The Boondocks and I was happy to see an anime with a predominantly black cast.