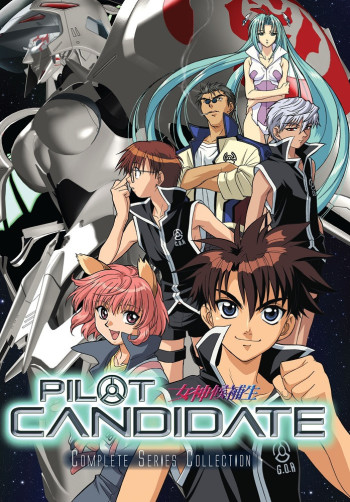 Zero’s group is to engage in battle simulations with the Top 5 pilot candidates. But, before the battle, Zero’s missing memories begin to return.

It is the year 2356 AD, 189 years after a shockwave from a distant supernova decimated the Earth. Since that fateful day, humanity has begun training for a final mission to protect the planet from the inevitable oncoming 2nd shockwave - a mission whose failure means the annihilation of mankind. For Katase and her friends, their training at the foundation...

I just finished Candidate for Goddess and my first thought was Stellvia! It reminds me sooo much of Stellvia of the universe. Everything is there the spaceships, the students wanting to become the best , the fights, the dreams yes everything you want from Candidate for Goddess you will find in Stellvia and in this series you may even get a real ending. Not like in CFG ;P I'm sure you're gonna love this series if you liked CFG ^^

Once you get a glimpse of Stellvia you'll find it pretty easy to understand why I chose this as a recommendation. The whole "kids in space" idea is prevalent yet again, but MUCH, MUCH BETTER. I can't stress this enough... if you liked CFG, you'll LOVE Stellvia. Much better plot and execution, much better character development, and an actual ending which is a definite plus.

Both of these series contain very similar themes. Children must train to protect mankind from total annihilation. And alongside all their intensive training, they have to grow up a bit along the way, and deal with at least some of the problems of puberty.

Follow interstellar bounty hunters Spike Spiegel and Jet Black as they scour the galaxy for criminals with prices on their heads. Hoping to escape their past, they live on the spaceship Bebop, but it's a dangerous business and old enemies don't forget easily. Allies come from unlikely sources, however, as they find comrades in the beautiful swindler Faye...

Candidate for Goddess is a more light-hearted space adventure than Cowboy Bebop, which deals with mature issues and has more violence. In both series, the characters face an uncertain future, and must deal with that uncertainty. Cowboy Bebop seems to go more in depth into the characters emotional state, whereas Candidate for Goddess deals strongly with the relationship between the partners of the crew.