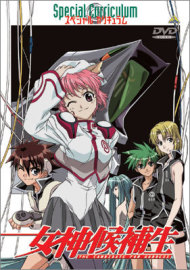 In the future, mysterious aliens called Victim have destroyed all the worlds of humanity except for Zion. Through the eyes of Ernest, a pilot of the Goddesses, we watch the rise and fall of the five Goddess pilots, and witness the growth of their successors, including the young Zero and Hiead. Though humanity's future appears bleak, it might just be saved by the efforts of these young men, and the female pilots that assist them...

StoryCandidate for Goddess OVA is essentially a brief recap of the TV series, along with some additional scenes from Ernest and the other Goddess pilots' pasts. Plenty of introspective thought can be found (similar to Evangelion TV 25/26), and in general the entire thing is seen through the eyes of Ernest. First of all, if you haven't seen the TV series, you have no reason to be watching this. Even if you have seen the TV series, I think you'll find that watching the OVA isn't very fulfilling either. The TV series ends off without actually ending, and explains essentially nothing about all the major questions raised in the series (Why can't Zero remember his past? What's up with the EX power? etc). For most people, we leave the TV series knowing that there's an OVA and desperately hope it explains SOMETHING that might leave us with a positive feeling of the franchise, but alas, it doesn't. For diehard fans of the series this OVA might please you a little, since we do get to see a little bit about the pasts of the Goddess pilots and do get to hear some of the characters' feelings when certain... tragic things occur. For anyone else, however, not only will this be a complete spoiler of the TV series, but it will offer almost nothing useful for fans who have seen the series. I mean, I guess if you really wanted to read the manga and didn't want to watch the series, and wanted instead a brief intro so you could read the manga, this might work for that reason. Then again, I haven't read the manga so for all I know watching this would spoil it too! I gave the story section a 5 because the original idea of the story definitely was interesting, but I cannot in good conscience give it any more points for uniqueness, as far as this OVA goes. Had it been entirely new content that would have been one thing, but given the fact that it's just a recap with a few unimportant things tacked on, I found it to be a worthless viewing. AnimationThere's no arguments on my end about how good the animation was. Characters and character designs were beautifully created with plenty of vibrant colors (including lots of bright pastels for hair). The space outfits were neat looking and very classy, similar to Stellvia or other such shows. The CG was especially well done and integrated, taking it a step above earlier series in this genre such as Vandread. The Goddesses looked sleek and high tech, the Victim looked scary and crazy as always, and the carnage and explosions were well done. There was nothing different about the animation and effects in the OVA than there was in the TV series, so this score should not be a surprise. The animation definitely was the highlight of both the OVA and the TV series, hands down. SoundYou might have noticed that in my review for the TV series, I scored the music a little lower. The music is the same in the OVA, with very pompous and cheery orchestral tracks being used the entire time. Trumpets and violins dominated, giving the OVA (and series) a very, very upbeat feel. The best I can liken it to would be watching Galaxy Quest (the real life movie). The music is so cheesy at times that it makes you think you are watching a parody or a 60s TV show, to be honest. I felt this was inappropriate in the TV series, but in this short OVA, it fit well. Since we aren't shown any of the character development or plot, for the most part, it makes sense to have very energetic music in the background. If, for some reason, someone was watching the OVA to get an idea if they wanted to watch the TV series, the music would probably convince them to watch. Besides the music, the voice acting was, as always, good for everyone involved, though it was mostly Ernest talking the entire time. CharactersDue to the length of the OVA, it was impossible to develop any characters. Ernest, though, was explored in more detail than you know of him in the TV series, since he wasn't even really a main character there. We see a little of his younger days training to be a Goddess pilot, and his interactions with one of the other pilots that influenced him greatly. Besides that, however, we only see flashbacks of the things that happen in the TV series, which neither develop a character, or give you any sort of idea what they are like. It was hard to rate this section for that reason... I originally had it as a 3 (due to the total lack of depth or understanding of even basic quirks of the characters), but later changed it to a 5 due to the interesting background of Ernest that we finally get to see. Without spoiling, I'll say that this helps you feel slightly more empathetic towards events that happen in the TV series, as well. OverallOverall, though the Candidate for Goddess OVA boasts the same high quality animation and interesting music of the TV series, I don't feel like this is worth a watch to anyone except rabid Candidate for Goddess fanboys. Since the only new material covered is slight and not anything important to the major plot questions that were never explained, there really is no reason to watch this unless you want to know these brief details about some of the characters' pasts, or are in total denial that your CFG watching session is over, so you must watch anything else that's out there! Not a good use of my time, that's for sure. 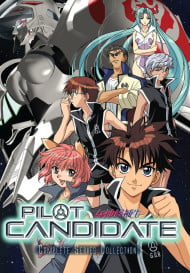 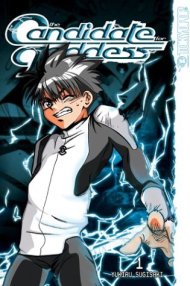