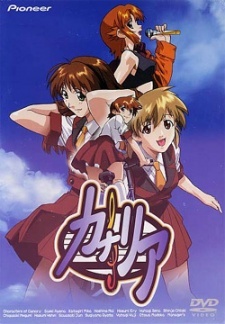 To make a long story short, Canary's plot absolutely sucked. It was completely implausable and made no sense at all. It felt like the story was written by a sugar-high 12 year old. They make only slight references to seemingly critical parts of the story, like what exactly Canary is. Also they are supposed to be a rock band but you only see them with instraments at the end. ADD seems really rampant in Canary. They learn the stage is cancelled, and half the group goes to get food, and the other half go to some bureacracy. After that they make a deal with the coordinator that is not mentioned later in the story. Then they go after this hairbrained sceme that makes absolutely no sense and is way too eleaborate for the intended goals.

Canary is simply put an eyesore. It makes use of repeated scences and still frames, especially at the end, which would have been much better fully animated. The character designs were unoriginal and uninspired. The Mayor and the coordinator look pretty much the same, and none of the characters have any distinguishing characteristics.

The characters were completely two dimensional, and none of them leave an impression on the viewer. I just watched it like 5 minutes ago and I cant remember any of the characters because they leave no impression at all. They all are as dull as dishwater.

Simply put, Canary is a shitty excuse for an anime. Its story is crap, the animation looks like it could have been done better by trained monkeys, and the characters just might as well not be there at all. If you even have the slightest urge to watch this, please dont. Dont make the same mistake I did. This is a shitty anime, and does not deserve to see the light of day.