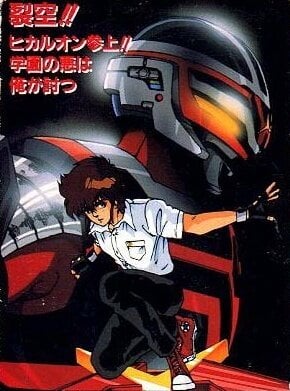 When they were just children, the beautiful Azusa, and her cousin the shy Yuzuru were bethrothed. In the present, Yuzuru has long since forgotten this promise, and is happily dating a young woman named Satomi. That is, until Azusa decides to pay a visit and cash in on their past vows. What's worse is that Azusa, spiritually and mentally speaking, is not quite what she used to be. With time running out and sinister forces against them, Yuzuru must protect his love from a newfound evil, or die in the process...

Campus Special Investigator Hikaruon and Laughing Target are not very similar in plot, but they do have the same type of mood about them. In both, the main character is driven by the need to relinquish a demonic evil and save the girl, creating a good horror element.

I also found that these two OVAs had a similar style of animation and music, but perhaps that is because they are both older works (even made in the same year). To sum it all up, if you are a fan of classic 80's anime, and fancy a dark story then you would like either of these!

When the planet Thanatos was destroyed, a young Maris was left with nowhere to go. Possessing strength six times that of a normal human made it difficult living on any other planet. She broke things everywhere she went and when the repair bills added up, Maris found herself in deep debt. Professional wrestling wasn't enough to keep the debts at bay so she took up work with the Space Patrol's Special Police! A call from her boss gives news that she hopes will change her life forever --she is being sent on a mission to save the kidnapped son of a wealthy politician. Her plan is to rescue the boy, but her motive is to steal his heart and gain his fortune in the process!

It's true, I love the 80's, and I think that Campus Special Investigator Hikaruon and Maris the Chojo absolutely reek of that era. They have a very similar style of music, and as you would guess, it's good ole tease your hair up, put on your spandex and rock to the 80's type of music. The animation and sound effects in these two OVAs reminded me of each other as well. Simply put, if you can enjoy the total cheesiness in the style of one of these anime, you will surely enjoy the other for the same reason!

Having become the financial capitol of the world, Tokyo is now a prime target for those that want to destabilize the world economy. To combat the rising terrorist tide, the Special Security Force is established. Tensions are high however, with both a vigilante anti-terrorist group called “Hunters” and the mysterious dr. Ichihara and his human enhancement project…

Both of these animes have high-tech gear and are sci-fi and investigation type animes. The most similar thing is the motor bikes and robotic forms of the protagonists.

Teenager Kanemori Kousuke is a secret agent for the international VN spy network. Using his computer hacking skills, he tracks international criminals. Later he goes after Neo-Nazis to the Arctic were they try to raise a U-boat with a sinister secret.

Both OVAs feature high school aged characters put in extreme circumstances. They are also both from the 80s and feature a similar design aesthetic. The female lead in a teacher role is also present.  If you like short, fun, and fast OVAs with style, check this out.

Krilin and Goku have rushed to Kame House so that both could receive their special training from Master Roshi; however, in order to receive the training, there’s a condition: they must bring their future master a fine young lady. Master Roshi himself suggests they bring him the Sleeping Princess in Devil’s Castle, who is reputed for her incredible beauty. The two boys agree to the terms and, without any hesitation, venture into a land of demons and danger.

Yuka and Satomi have been fighting since they were little, but as adults, they are waitresses. Yuka, however, is more than just a waitress: she has joined VG (Variable Geo), a fighting organization designed to let waitresses around the world show their stuff in the fighting ring. The fighters play for millions of dollars, but the losers will be shamed by a fleshy public appearance. Satomi's little brother is sick in the hospital, and now she too must join VG and fight against her best friend Yuka to pay for his surgery. Will she succeed or become one of the shamed?

Long ago magicians used their magical powers to bring a statue to life, thus creating the monster Hirudegarn. Having been sliced in half the creature was sealed in the bodies of two brothers. Now, in the present day, an elderly man warns Gohan of the return of Hirudegarn and begs him to use his powers to release one of the two heroes, Tapion, from a music box. Thanks to the Dragon Balls Tapion is finally released, but to him, it is only a matter of time before he suffers the same fate as his little brother and the monster is whole again. The Z-Fighters must do everything in their power to stop this from happening!

Natsuki loves martial arts and is a young student of her high school's karate club. A new transfer student has just arrived at her school: the aloof and expressionless Rina. Nevertheless, Natsuki is interested in befriending the girl and forces her way into walking home with Rina. Yet on the way, trouble strikes in the form of masked attackers! With Rina's wrestling expertise and Natsuki's karate moves, they are able to fend off the pursuers easily; however, the bigger concern is why are Natsuki and Rina being targeted?