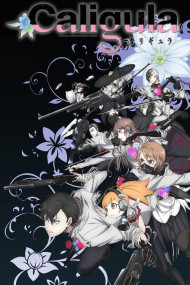 Destroy ideals (you) and return to reality (hell)..." A beautiful song echoes throughout the city. A city is overseen by the popular virtual idol group "μ", every day was filled with peace and serenity. Ritsu Shikishima is a freshman at Miyabi city Kishimai High School. With good grades and athletic skills, he was spending a fulfilling high school life surrounded by many of his friends. Time has passed and on the first day of his second year, the one who stepped up to the podium as the class representative was someone who was not supposed to be there...

When you lose your composure, you cannot reach the truth or reality

Anxiety, Irritation, and Other Such Negative Emotions Spread to Others

Why do we live? The further we pursue the meaning of life, the more confused we become

Everyone gets hurt. But those who don't realize they're hurting can't be healed

Looking forward doesn't equal progress on its own. Understanding one's situation is also an important step.

When you're in a desperate situation, it's all the more important to keep smiling

Your life shouldn't be built from someone else's blueprint. No matter how unskilled you may be, you should draw it yourself.

Even if something has already happened, you can still choose what you do.

People constantly seek out the right answer. Yet, is being right really all that matters?

Destroy your ideals and self, and return to hell and reality

Heads up, might be some spoliers below, but ill try to keep them more vague if possible. Be warned! Story I think the story for Caligula and the concept was pretty good, and went beyond the typical "SAO virtual world" type anime. It felt a bit more like the Matrix (possibly inspired by it? The Digiheads reminded me a lot of the Smiths and everyone was brainwashed into accepting the reality). My major criticisms of the story would be that after the first few episodes things seemed to happen way too fast, like they were rushing through character stories to make everything fit 12 episodes. This could be a problem with Crunchyroll possibly, but it also seemed like there were several instances of the anime looping back a few seconds. Its possible it was intentional, but if it was I didnt really get the message and it seemed like a production error. Also, the Ikuri guy (Mr. Scarface) seemed to just suddenly appear out of nowhere without context or introduction? Maybe I missed it (or maybe a CR bug) but it was pretty inorganic. The same thing happens laters when a Musician switches sides, but that was at least explained later. Animation I really didnt have any qualms with animation. Nothing groundbreaking but it was pretty creative and relatively well detailed. I liked most of the character designs too, but I did at times have some trouble telling a couple of the characters apart (I just watched it but im bad with names - the shy lonely girl, the bomber before she went berserk, and the one with mom problems - got these 3 mixed up a few times) Sound Good voice acting, the fight music and OP were really good as well. I dont know who the vocalist is but I plan on looking her up and seeing if she has more music! Characters This is the only area I really think fell flat. I think *a good number* of  characters had potential for a good story that just wasnt really explored. Like I mentioned earlier, the anime just seemed to rush past most of that after the first few episodes. This became obvious when they just took half an episode, locked everyone in a room, and then had everyone spill their stories. I liked the development before where their stories were slowly revealed and then later were discussed. After this episode the only character story that really had any more interest to me was the MC, but thats only because it was pretty strongly implied at this point that he was pretty close to the whole Mobius project. Overall impression is that it was a decent, above average anime. I may not rewatch often but I definitely did not regret seeing it (hey, I liked it enough to give it a review, right?). Character development and possibly some story flaws were really the only thing for me that dragged the score down for me.