Cagaster of an Insect Cage - Recommendations 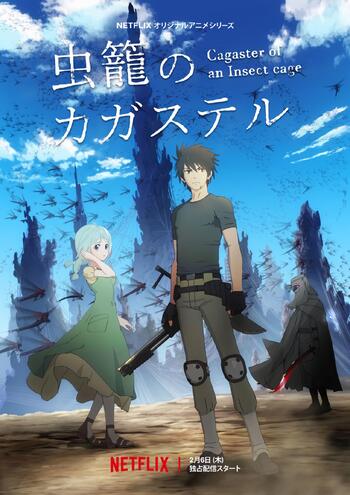 If you're looking for anime similar to Cagaster of an Insect Cage, you might like these titles.

The Island of Giant Insects

Students from Hosho Academy High School were aboard a plane when it crash lands under mysterious circumstances.  The heroine, Oribe Mutsumi and her classmates wash ashore on an island. The surviving passengers decide to wait for help to come, but the island turns out to be inhabited by giant insects! Mutsumi wakes up on a beach and finds her classmate Matsuo Ayumi. They use their wits to procure food. Believing that help will come in three days, they decide to endure until then.

Both feature giant CGI bugs and quite some gore, whilst cagaster has a more developed story both do feature similar themes of survival and dealing with the giant insects.

Similar idea... a virus that turns people into monsterous insect like creatures. Black Bullet has MUCH better animation. I also like the characters better. However, I give Cagaster of an Insect Cage credit for not having a bunch of Lolis flock to the main character.

A compilation film, recapping the first season of Sidonia no Kishi.

Gidoron is an organized colony of extraordinarily advanced ants, who have a higher intellectual power than that of man. They turned three kids into micro insects. The kids tried to reveal the existence of the Gidoron to the people but...