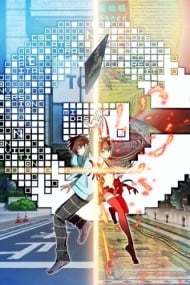 StoryI imagine the executive meeting that inspired this dull, jabbering insult to my intelligence went a bit like this. Director: I’ve been thinking lately we should do something deep and relevant about today’s global financial situation. It’s been all over the news and I think the kids would appreciate someone really bringing it down to their level. Exec: Uhh, really? But finance is like so BOOOOOORING. Director: Well, of course we could spice it up a little, you know, give it a representational hook or gimmick. I have one or two ideas that I think would really - Exec: Oh oh oh! I’ve got it, I’ve got it! MASCOT BATTLES! Director: What? Exec: Write this down! It’s not often I get such inspirational flashes. I can see it now - economic conflicts figuratively enacted through pet monsters! ‘Cause everyone likes Pokemon, right?? The result, ladies and gentlemen, is this show, the worst possible marriage of everything that shouldn’t exist in anime. Dry, abstract exposition about money combined with utterly mindless battles between metaphorical creatures that have no real-life relevance. Burrow deep enough and C: The Money of Soul and Possibility Control appears to contain a human tale about taking huge financial risks for the sake of loved ones. That this is mere veneer becomes clear the moment we ask why the characters don’t just work overtime, get a second job, or aim for promotion, considering any of these require less effort for more guarantee. The financial battles are vehicles for an impending apocalypse caused by some… thing that gets no explanation. All we know is, at some point, a digitised whatsit begins to sweep through Japan and the hero has to do stuff in the ether to make it go away. Not that the fights are any good either. Occurring without reason or logic, they generate about as much friction as a limp dick. Just as one combatant summons giant balls of fire, the opponent blocks with an inexplicable beam of sparkling blackness, all the while an electronic voice yells nonsensical financial jargon not even the Wall Street folk would enjoy piecing together (how to counter sensibly when your enemy has just thrown a hail of MACROFLATION!!?). There are no recognisable dimensions to the battles, no identifiable limitations that tell me ‘this person is highly skilled compared to that person’. Thus we must take for granted that Souichiro Mikuni, the cool, mysterious rich guy, is unbeatable because everyone says so; when he fights, I can’t actually tell.AnimationI’d like to put a message out there for the kids growing up on a diet of C-like atrocities: animated backgrounds full of feeling, atmosphere, and texture do exist. For evidence, look to Mahou Shoujo Madoka Magica or Eden of the East. The polygonal edifices we get in C bring to mind the artistic sensibilities of a McDonalds restaurant - cold, garish, and above all cheap. Effects happen, shapes and colours and patterns zoom past but none of it serves any discernible purpose except to distract us for another five seconds.SoundIn moments when the plot wholly eluded me, the score managed to restore some of the potency of the situation. Unfortunately, sandwiched between unmemorable opening and closing themes, and voiced over by a crap script, the courageous cinematic soundtrack gets entirely lost.CharactersIf there’s anything anime needs more of, it’s teenage boys trying to get stronger. I’m being sarcastic, of course. What anime needs more of are characters I can tell apart from all the others. C’s cast melts into a giant pot of tokenism and archetype that effectively abandons the audience to apathy. I’m surprised, for instance, that the bland, pineapple-haired protagonist (had to look up his name, Kimimaro Yoga) was thought qualified to be one when his only notable features are being nice and harbouring angst about his long-lost father. The only vivid performance belongs to Masakaki, the guide of the alternate dimension in which the battles take place; he is a nod to Willy Wonka that strips away all the child-friendly veneer and replaces it with a chilling pitilessness.OverallColour me spoiled if you will, but I like to spend my time watching things that I understand. I like characters for which I feel empathy doing things I could imagine myself doing if I were in their situation. Most of the financial jargon the target audience will struggle to relate to and anyone who does will snooze simply at the banal abstractedness of it. Instead of a poignant metaphor on the dangers of economic risk-taking, we get a discombobulated mess that farts a host of vague concepts. The only emotion this show inspires in the process is boredom.

Before I start my usual rant that tends to pop up in my reviews of short animes, let me just say I enjoyed this anime.  Now on to everything else. This anime isn't even 12 or 13 episodes...it's 11. I don't think I have ever seen an eleven episode anime that wasn't rushed or left without an ending and this is no exception. Hec, it's rare for 12 or 13 episode animes to not have those problems. This anime has a lot of explanations, most of which deal with economics and this "other world" called the Financial District. A lot tends to be explained at a time and quickly too. It's probably best to take this anime at face value and not think too deeply about what's happening and what is explained, otherwise it might be slightly overwhelming. Well, I've never been good with economics beyond the basics and I'm terrible when it comes to numbers and I overanalyze EVERYTHING, so there is my problem already, however, if the series had been longer and the explanations broken up and given over a longer period of time, it wouldn't be so difficult. And now I wonder if anyone else feels the same or everyone who reads this thinks I'm a blabbering idiotic moron. ANYWAY, that aside, the pace is rushed too. I don't think it had the time to build the characters and relationships as well as explain what was going on properly. Short animes are like short stories. A good one is simple, makes use of stereotypes, uses common well known settings and concepts that don't need a lot of explanation, and limits the number of characters. Although it doesn't necessarily have to use all those things, it shouldn't be to complex. That's how a lot of short animes fall short of greatness and this anime is no exception.  Characters- The characters were diverse enough and decently interesting, but I wasn't really sure who to be rooting for. At times it felt like some characters were just being idiotic, but maybe I didn't have enough of a firm grasp on the situation and therefor misunderstood. I would have liked to know more about the main character. It almost felt like I knew more about Mikuni's past than Yoga's. As for Satou, sometimes she seemed to be completely ridiculous with her ideas, but like I already said, maybe I understood less than she did about the situation. Story- I feel the story was somehwat unique, which was part of it's downfall as a short anime, but also kept things interesting. It could have benefitted from more time to develop though and the ending didn't feel like it wrapped much up. There was also the problem of random details that never got a clear explanation. Some could be assumed by clues given throughout, but not all. What was with the book of numbers? What kept injuries in battle from existing after the battle and did it only apply to injuries from the assetts and those blades things or if someone punched you in the financial district, would those injuries vanish too? What happened at the end and where is Masu? What about the similarity between Yoga's assett and his fathers? What was C really trying to do (technically it was mentioned, but it didn't make a lot of sense)?  The story includes a lot of elements too. I think that was another issue this anime had. It didn't seem to really fit nicely into a genre to me which isn't bad, but it felt like too much crammed into a tiny anime at times. I enjoyed watching it and I think it's worth it, but enjoyable or not, I give the story a seven, mostly because of pacing. Animation- This was a bit curious to me. It was mostly average normal animation for these days but it had some oddities. The most noticable (because it's in every episode) is at the end of the opening song where it sudenly stops and it sort of seems like the viedo is lagging but it's not. It happens in other places too but it's not a bad thing. I just wanted to mention it because it was unique. Sound- I still don't know what on earth I'm supposed to say about sound, unless one of the voices totally doesn't fit the character or there is some annoying sound beeping through out. Normally I judge it by whether or not I could stand listening to the opening and the ending too if I listened to it. This one is nothing special but I wasn't dying to fast forward to make it stop so I guess it's average. Overall- I know I said there were a lot of flaws in this anime, but if I were to rate it based entirely on my own opinion/experience and how much I enjoyed it or how well it kept my interest, I would give it an 8. However, I'm not basing my overall score on my opinion, enjoyment, and interest alone. I am taking into account the parts of a story, character and story development, pacing, animation quality and aesthetic, it's uniqueness, and the satisfaction of the ending or whether the ending gave closure. Based on all that including my personal enjoyment, I give it a 7 overall.