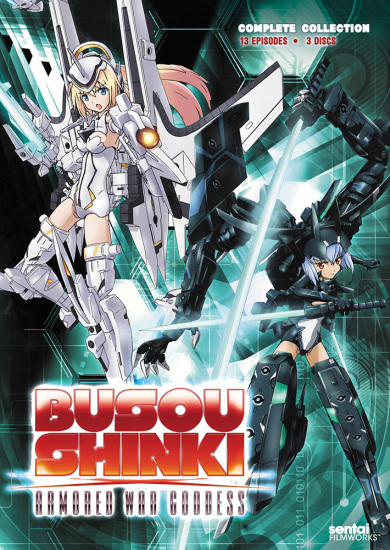 I first encountered Busou Shinki when a Japanese friend (who loves mecha) brought me a Murmeltier as an omiyage from one of his visits. He said something like, "She had an eyepatch and a hat with cat ears, and was kind of gothic and cute, but also robot and weapons. She's like a cross between you and me!"

You certainly could take this anime adapation of a game and toy line as a thinly disguised ecchi show watered down to be appropriate for "children" and pandering to doll-joint-loving-otaku by creating and perpetuating an image of women as dumb, weak, helpless because of their size/strength, and purely decorative. (For the record, I let Inner Feminist word that last statement).

Anyway, I tried to approach it as a show about little dolls in a big world and enjoyed it enough not to drop it--but also felt somewhat obligated to see it through because I own one and all.

Story: The story is basically nonexistant, consisting solely of a series of events wherein the dolls get into predicaments mostly because of their size and solve them based on friendship~ and teamwork. It's light and easy to watch.

Characters: Weak and uninteresting, but consistent and not over-the-top. No character development.

Basically, this show is very very generic. There is nothing outstanding about the art or the story and characters, but there's nothing that really annoyed me or made it tough to watch. 4/10, highly recommended for doll-joint-loving-otaku who can't handle the world questioning their beliefs about women.