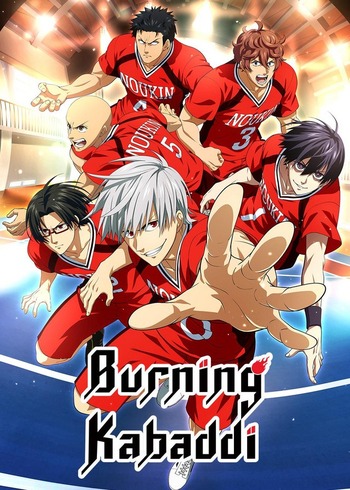 Do you like sports anime? You must have no idea of what Kabaddi is. If that is the case, this review is for you.

Kabaddi is a game played between two teams of seven players, in which individuals take turns to chase and try to touch members of the opposing team without being captured by them. Two teams occupy opposite halves of a field and take turns sending a "raider" into the other half, in order to win points by tackling members of the opposing team; then the raider tries to return to his own half, holding his breath and chanting the word "Kabaddi" during the whole raid. The raider must not cross the lobby unless he touches any of his opponents. If he does so, then he will be declared as "out".

The thing that is used in this game is the body itself. Team play that helps you capture the enemy that enters your territory; a sport in which dragging and bringing down the opponent leads to victory. This is the game, where you run while fighting. Yoigoshi Tatsuya hates sport. Be it getting scolded by the coach, hearing remarks that are full of jealousy of your friends, or being made pose for the cover of the school's sports magazine. And so, he has been living a high school life with no sports; any invitation to join a sport club pisses the hell out of Tatsuya.

One day, however, he makes a terrible mistake. He decides to check the Kabaddi club. After a number of taunts, thinking that Kabaddi is just some lame sport that will never be any different, he decides to play Kabaddi against one of the members of the club that tries to recruit him: if he wins, the Kabaddi club will never bother him anymore. If not, he will have to join the club. Because of the fact that Yoigoshi does not want to take Kabaddi seriously, he loses and has to join the club.

Regrettably, the anime was not as fun as the manga. I felt like the anime could have paid supporting character more attention, telling their stories: why they started playing Kabaddi and why exactly they appreciate Kabaddi that much. I feel that it would make the overall story more interesting to follow for the viewer. In addition to this, the narrator always saying ‘struggle’ was annoying as well. It is nice of him to explain Kabaddi game moments, but no need to explain something over and over again. And the last thing for me to say, draw some EYES for Date!

Overall, not bad for the first anime adaptation for a mangaka that has never had one. I will not lie, things could have been much better than that, but it still was fun to watch Burning Kabaddi. Do not expect something amazing out of this anime, give it a try, it is not that bad.

Freakin’ finally – a sports anime you’ll believe will actually destroy you in an arm-wrestling contest. Burning Kabaddi is a conventional sports anime all the way through, but it earns massive points for itself with the unique sport it chose to spotlight and the way it chose to play it out for the unknowing masses. Kabaddi’s got no pads, no helmets, and not even balls. It’s just pure athleticism and strength in what you can oversimplify as the most intense game of tag ever.

Of course, there’s a lot more to kabaddi than being just this weird marriage between tag and dodgeball (minus the balls, remember). It’s a niche sport from India which takes its name from the cant the athletes have to recite as they’re playing. It’s okay to admit it sounds weird and goofy because the show acknowledges as much as well. In-series, the main character originally dismisses the sport as a joke until he inevitably warms up to it later on.

There’s a raw, manly appeal to the series that you’d be hard-pressed to find in most sports anime today. The characters are very noticeably beefed-up and when they compete, they really do mean they’ll pound your face in. But much like the show, they’re all fun and easy to get along with, which is pretty much the best you can ask for if most of them are dumb meatheads at the core.

It’s typical sports anime fare – main character hates sports, is actually a prodigy at sports, then ends up loving the spotlight sport anyway thanks to the power of teamwork and competition – but what’s great about Kabaddi is how it still manages to make itself interesting enough to follow. It could have coasted by on the sheer novelty of the sport, but it slams that notion face-down on the mat and decides to go all-in on everything else that would make it appealing for the casual viewer.

It’s not perfect, however. The show does invest in the most exaggerated reaction faces and Mortal Kombat “Finish him!”-type gameplay to make up for its limitations, but you can tell it didn’t get a big enough budget to begin with. There are some ill-timed flashbacks that kill the momentum, but the show at least knows how to bounce back instantly with some legitimate tension-filled in-game action.

The show ends just as the main team heads off for the national tournament, which means everything before the finale is just a series of practice matches and episodes of training the new members. But Kabaddi makes the prequel vibes work anyway, even if it doesn’t look like it’ll get a second season any time soon. Too bad about that, but don’t let that distract you from the fact that Kabaddi is legitimately one of the more fun sports anime to come out this year.

It's certainly the manliest, but this is more about heart than it is about the muscles – just like any good sports anime.

This is really dead average. I am not super into sports anime and just watched this to kill time but it really isn't very good. Plot breakdown: Star soccer player quits soccer and starts secretly streaming. Someone on the kabaddi team extorts him into joining after finding out he became a streamer. He learns to play kabaddi, season continues that way. The animation is average at best. The characters are one dimensional and bland. I wouldn't really recommend watching this but if you are into sports this might be for you.

I overall like this show. I really hope there'll be a next season. However, the animation isn't the best which is why I gave it a 7. Story is kinda similar to most sports anime so yes it's a 9 because I've never heard of this sport, it's a new topic. Overall a 9/10

Story & Characters: As far as sports animes go, Shakunetsu Kabaddi is pretty by-the-book. it's not doing anything groundbreaking. But it has characters you will like watching and want to root for. The matches are quite interesting. (I'll admit that I'm slightly biased because I have a soft spot for Kabaddi). The story could have had some more interest, characters could have been fleshed out a little more, a bit more humour would have helped it. But after all, it's only 12 episodes so far. Overall, if you want a light & comfy sports anime to kill some time, this wouldn't be a bad choice.

Animation & Sound: Nothing special, but the art is crisp & vibrant, and the soundtrack goes well with the vibes.

Verdict: Watch it if you want something casual & comfy to watch during work breaks or if you need to rebound from finishing your favourite sports anime.