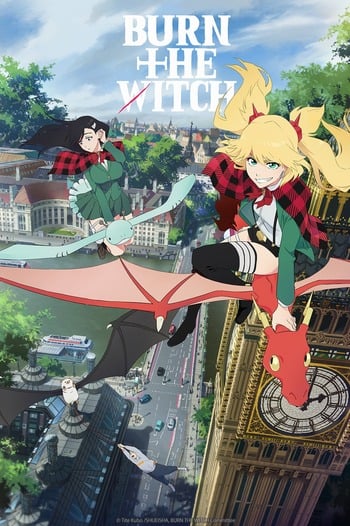 This movie is an introduction to a wannabe long running series that failed to be satisfying on its own.

This movie is the adaptation of Burn the Witch and in some ways also of the Burn the Witch Pilot. During this movie a lot of things didn't make sense and in order to write this review I went and read both of the manga afterwards. I should also mention that I have no knowledge of Bleach in any way and this review will only consider this show on its own merit.

The movie manages to both deliver obnoxious exposition for half of the run time while not giving us critical information about what is going on. Here's an example: There is a scene in both the anime and manga in which they explain the "Dragon Interaction Law" which states that anyone that touches a dragon without permission is to be sentenced to 100 years in jail or executed. A critical problem arises right here from the adaptation. In the manga this is explained in text boxes on the side of the page which makes sense and works perfectly fine. But in the anime Noel says it out loud. She has no reason to explain any of that, those are basic informations of the setting that literally everyone in the show knows. In fact, she's not even explaining to someone really, she just suddenly starts to explain stuff to the benefit of the viewer even if there is no motivation for her to do so. Another example of this is when she says to Ninnie: "Our duty as Pipers is to take dragons to pasture and harvest from them". Can you imagine suddenly telling your colleague (senior colleague in fact!) what your job description is for no reason?

Despite the heavy handed exposition the world building is still a mess. In the show they tell us the Dragon Law as I reported but then in the same scene we see Balgo do that exact same thing, touching a dragon. This is never explained. We can assume that this is because Balgo is a Dragonclad right? But what is a Dragonclad? The anime never clearly states it, the only thing it says about them is that they attract Dragons.
And here the problems start to derive from the source material. While this movie adapts both the manga and its pilot, these two actually contradict themselves. In the Pilot the Dragon Law exists for the vague "benefit of everyone"and Balgo became a Dragonclad only because he was in contact with a dragon for 10 years and was a special case. But then in the following manga they say that everyone that comes in contact with dragons becomes a Dragonclad, and don't bother explaining then Balgo backstory in any way. Why did he not get imprisoned or executed? Why is he special?
The show then goes even further, it doesn't explain neither why the Dragon Law exists nor what is a Dragonclad.
Oh and, spoiler warning, the only time we see someone break this "extremely important law" guess what happens? They obviously don't get punished or killed at all but instead recruited in the group. Why authors make laws and rules importance when they don't give a fuck about following them I will never understand...

The problem of a "future long running series"

Other than contradictions the main problem with the show it's the sheer overconfidence that this will be a long running series. When in an hour long show with a tight runtime I see them wasting time showing of a council of some sort and present EIGHT DIFFERENT COUNCIL MEMBERS when only a single one is in any way relevant to the story told in this installment I can't help but roll my eyes. The show oozes a "I don't need to explain anything right now, I can always do it later" attitude. What is Balgo backstory? Find out next time! Who are all those characters that played a role in the story? Find out next time! Why exactly is the Dragon Law in place? Find out next time! Etcetera Etcetera.
As it is right now, with this one entry the story is extremely weak. We focus half the runtime on character we don't really learn anything about. And the actual story was forcibly resolved by story elements that are gonna be relevant in the future. All these problems wouldn't exist if this was what is was supposed to be, the first 3 episodes of a show. This is what this is, it's the only thing that makes sense. And I would have been satisfied with a new seasonal that started off this way. But since they packaged it a movie they are forcing me to judge it as such. And on its own it's terrible.

The up-and-coming Studio Colorido did a good job considering the material they had to work with. The animations are really well made. The colors pop of the screen and the characters design are even more visually striking than in the manga. The only small problem I had with the technical side was with the OST being a bit bland and generic. But other than that this was a solid adaptation.

This movie was unsatisfying on so many aspects. The second biggest fight ended with an off screen attack, as in we see the character that was fighting attack but not the attack landing. And the final fight ended with an off-scene attack, as in the fight was won by a character that was somewhere else and just walked in, won the fight in a single hit, and then left.
Balgo gets a random power out of nowhere that never gets explained but guess what the show expects of you? That's right, shut up and wait.
But I have to say that the biggest disappointment is how little the two supposed main characters of Noel and Ninnie actually mattered. Sure they were on screen and had some action scenes, but as far as the story is concerned Balgo, Bruno, Macy and arguably even the Chief were a lot more important. Don't market a story about two characters if you don't intend do write a story about them.

Harry Potter meets Hayao Miyazaki movies and adds some ‘can I see your pants jokes,’ so that no one will copy strike Kubo-san.

Burn the Witch is not worth the ‘Bleach’ hype. The anime follows the adventures of Noel Niihashi (Rukia should have stayed petan) and Ninny Spangcole (Hiyori is finally boing-boing). The two are Witches that work for Wing Bind in Reverse London, the western branch of Soul Society, which is also populated by Dragons. This, however, is being kept in a secret from the Human World's London.

This all might sound as an absolutely gem, as a candy that you will rush to savor. Unfortunately, the movies are mediocre: the characters show hardly any development, the ‘pantsu’ jokes somewhat interfere with taking this anime seriously, and the storyline just does not make any sense whatsoever. For example, why are humans the main focus of Burn the Witch? Why did not Wing Bind offer any help to Soul Society in Quincy Blood War? What are these dragons, when they do not even remotely resemble hollows? Where are hollows? There are just far too many questions.

Unfortunately, it looks like Burn the Witch does not even care about making even a grain of sense. Of course, it is near impossible to show enough development in only 3 episodes, however, what is the point of mentioning the Bleach universe? There is none. It is an open secret that Bleach, too, has way too many flaws. But one thing is obvious, the series had its drama and there was a story. Not the best one, but still an okay one. And then comes this. I do not know, Burn the Witch might have been the best prank of Kubo-san so far, 10/10.

Burn the Witch is an uneven experience for people wanting dragon action, magic and comedy.

As this is the pilot for a possible series, the need for an impressive first impression is critical. Pilots need strong hooks like interesting characters, colorful settings and memorable designs and animation.

Unfortunately, Burn the Witch does not show anything memorable for those curious. The main characters feel thin, the setting is not explained well, and the ending hook is not inviting.

For anyone interested in modern fantasy, watch something else. I suggest Little Witch Academia because Burn the Witch feels very much like Academia.

This review is written specifically for the anime. It might be based on really good manga, but I do not know. If you like witches, dragons and magic in the modern era, do not watch this, but it might be possible to have good experience with the manga.

What’s going on? This the leading question in this anime with terrible pacing. There is an explanation about “Reverse London”, basically hidden part of London where there are dragons, witches and magic. That’s all you will get from the settings. You can deduce that the main protagonists Noel and Ninny are witches and work as something like a contract based unit against dragons. You won’t get why, nor you will get how the other characters fits into the story. The opening dialog is something about “fairytails” and for some reason witches are also “idols” but it is never explained why (possibly cover-up?). There is also really important something about “the group”, but it is never explained what “the group” is.

So most of the show is witches randomly chasing dragons with some random significant events happening. If you look at each event separately, there could be really interesting story around it, but there is no such story in this anime. It really feels you are watching a trailer, and not an actual anime.

But the anime, does not fail to be an anime. There are sexual “jokes” (basically a dragon that say “show me your panties” in the most inappropriate moment). The main side-character have crush on Noel and this is used in the most inappropriate way, even when there was a chance to be wholesome. It is unclear how all this “sexual” “jokes” and occasional “cute” scenes (seriously, when it become small that dragon is cute) fits the whole narrative. Again, there could be something substantial missing from the source material.

In conclusion, this anime does not have a beginning, an ending, and even the main narrative is disjointed. New characters just pop-up with clearly established relationship to the protagonists for no reason and events just happen. It is clearly an anime made solely to sell the manga. You do not need to waste your time watching one hour long trailer with random cuts.

My expects about Burn the Witch was comedy, magics arts and dragons based storyline and enjoyable screenplay but the dragons and screenplay is not been much good, however the short duration neglect the boring and it satisfied the expactations. The story is not fully compeleted in just one or two movies i thought and it's had the spark to trigger excitement about the sequal as into me. About the characters arc is better then fair and some of them it's look good to me so i think they are all play decent, well Balgo Ywain PARKS, Bruno BANGNYFE, Macy BALJURE looks nice to me and i think Balgo Ywain PARKS play the majoir roles in further storys. It's don't talk a lot about dragons but given the good leads in the end. Animation is onely thing that impressed me, i like it well and don't have a much complants about it. The ending of the movie is not suprise me but is unexpectable and good. My opinion it's don't have much to say about so lt is watchable.