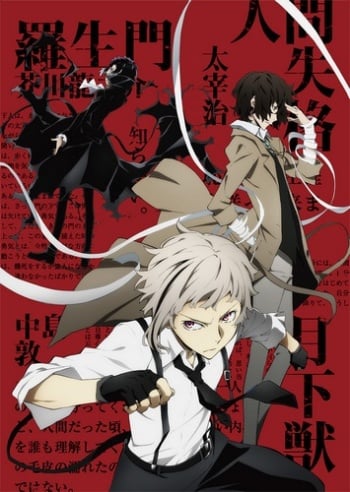 Best boy Doppo Kunikida get's a episode all to himself and to his packed schedule, but alas nothing seems to go according to plan and he is reunited with a man from his past. Oh and he also raises a marriage flag with a loli named Aya.

For story refer to previous text.

Best boy and a loli wife, what more could you ask for?

I really loved this OVA. Kunikida got an episode to himself (as he should) and the ending was adorable Kunikida definitely deserves to be the next president of the ADA, he'd make an excellent leader  I really liked Aya too, not going to lie I did find her a bit annoying especially with her trying to manipulate Kunikida but she was actually an interesting and adorable character. I wonder if we'll see Aya again - probably not but still - if she does appear again it would be great to see more of her character. I also genuinely loved seeing Kunikida trying to find a way to keep everyone safe and how he planned everything out with the stun grenade and alerting Yosano was really clever. All in all great episode I don't know why it wasn't added to the main show. I'm assuming it has something to do with the fact Atsushi wasn't really there, I know there were episodes with just Dazai in but they were flashbacks and extremely important to the plot whereas other then the ending this episode didn't do anything except show character development, which is great but isn't essential to understanding the overall show.

NO SPOILER - A story full of drama and twists, and, of course, some funny moments. The first series of BSD is where I would put this OVA. I really wouldn't publish this episode as a stand-alone OVA, but as a part of the season one. I still stand by my opinion that the first three or four episodes of the second season should have been selected as OVAs. However it doesn't change the fact that I enjoyed watching this episode!

I recommend this OVA only to BSD lovers who have already seen the first and second seasons. Definitely don't start with this OVA, because you could spoil a lot of important things, relationships and twists.

-Kunikida and Atsushi are the main characters of this OVA.
-I honestly don't understand why it wasn't included in the series, because Rampo, for example, had a whole episode for himself, too.
-Anyway, I recommend this OVA mainly to BSD fans. They will certainly be as excited as I am.