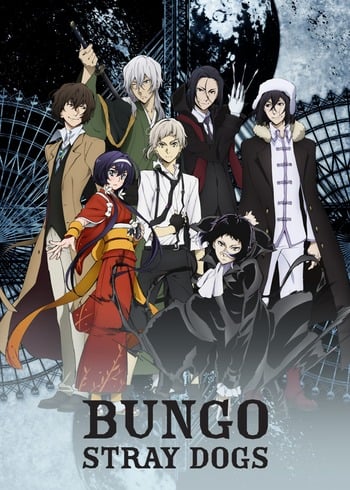 If you're looking for anime similar to Bungou Stray Dogs 3rd Season, you might like these titles.

Both feature lots of bishounen characters with superpowers who are members of rival gangs/organizations. It's action with some comedy mixed in, though Bungou Stray Dogs devotes more time to humor.

While the cursed power of Shiryu grows stronger within Gai each day, both Shoshidai and the mysterious Gabi continue their mission to protect mankind.

After being separated from him for ten years, Shin Kanzato and his brother Jun have moved to Ayanagi City to live with their older brother Ryou; but little do they know that a rash of mysterious murders have recently plagued the city, leaving the victims’ bodies turned inside out. Soon, Shin finds himself being attacked by a man who is able to summon a mysterious and ghostly creature; and more importantly, he realizes that he possesses the same powers. Now, with the discovery of more people like himself, Shin finds himself drawn further and further into the world of those who use "Persona."

Satellizer el Bridget and some of the most powerful – and desirable – Pandoras in the world are summoned to a secret base in the wilds of Alaska.​ These gorgeous warriors arrive primed for battle,​ but they soon discover the true purpose for their presence: to assist the clandestine Chevalier organization in forging a new breed of soldier - E-Pandoras! Once normal girls,​ these eager beauties volunteered to have their bodies genetically enhanced in order to join the fight against the deadly alien invaders plaguing the planet.​ But there's more to becoming a superhuman battle vixen than tattered uniforms and sultry slugfests.​ Rumors of heinous experimentation haunt the E-Pandora project,​ and only Satellizer and her loyal companion Kazuya can unravel the mystery before it's too late!

Shuichi Kagaya an ordinary high school kid in a boring little town. But when a beautiful classmate is caught in a warehouse fire, he discovers a mysterious power: He can transform into a furry dog with an oversized revolver and a zipper down his back. He saves the girl's life, sharing his secret with her. But she's searching for the sister who killed her family, and she doesn't care how degrading it gets: She will use Shuichi to accomplish her mission...