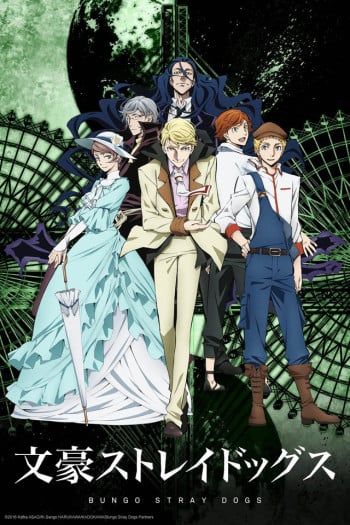 *In anticipation of season 3, I'm sharing my thoughts. This review is for season 2, but Plot/Story and Characters sections touch on aspects relevant to season 1. Beware: minor spoilers ahead.*

Bungou Stray Dogs Season 2 is split into two parts: the first four episodes are flashbacks to Dazai's life as the youngest executive in the Port Mafia, told from his friend Oda's perspective; the latter eight episodes continue the main storyline, as the Armed Detective Agency takes on a new threat.

The storyline and character arcs are deepened, the action kicks up a notch, and the score and animation are just as great as before. Overall, this is a step above season 1 but it's not without problems.

The plot remains frustratingly imperfect this season, despite good pacing. Plot was also the weakest link of season 1 due to an apparent lack of an overall goal, which left me constantly wondering when the show would drop the comedic front and get down to business. Season 2, at least, didn't suffer from lack of an overall goal. Rather, that goal just wasn't all that interesting.

The show seems to struggle to establish relevant stakes. Part of the problem is that it's done such a great job of convincing us that the characters are overpowered (I'm looking at you: Ranpo-san). There's a serious disconnect between the established storyline and the character arcs. Dazai's character - being already so far removed from the plot - saves this season with flying colors (more on him below). But season 3 could turn out to be really disappointing if this issue isn't resolved.

Overpowered characters aside, I have to say that Bungou Stray Dogs does a pretty good job of executing the overused superpower trope in a manner that feels refreshingly original. Yes, most characters are overpowered, but each has a specified weakness (except *cough* Ranpo-san *cough*) and Bungou Stray Dogs always makes it clear that the strongest characters are consistently the ones you least expect, often with the simplest abilities (a message I LOVE). It deepens character relationships significantly and kept me on my toes.

For example, one might immediately assume Akutagawa to be the strongest, given how versitile and offensive his ability is, or Kenji, who literally has super strength. However, its Dazai's strategic mind and ability to nullify a person's gift with a single touch that consistently enables him to gain the upper hand in almost every battle (despite the obvious fact that he completely lacks combat skills).

Dazai's former partner, Chuuya's, gift of manipulating gravity is also not an obvious candidate for strongest ability (just think of Ururaka from My Hero Acadamia). But Chuuya proves us wrong in one of the most epic fight scenes I've seen in awhile. Same goes for Oda's gift of seeing 5-6 seconds into the future - an ability initially disregarded by many, but one Dazai proclaimed to be too powerful for even Akutagawa to defeat.

This show is not about physical strength and the emphasis on morality and strategy makes the overpowered nature of some of these gifts forgivable.

The animation is a cut above. I adore the style and art direction, particularly the character designs. No two characters look alike - their idiosyncracies are all represented on their person in some form and the colors/shapes of their eyes are striking (especially Atsushi's). They feel far more realistic than your average cast. Action sequences are also incredibly fluid. A real joy to watch.

The score for Bungou Stray Dogs is mostly classical - something you don't see too often in anime of it's kind. Somehow, it all blends well with the J-pop opening, which is up there with some of my favorite anime openings ever. However, there were multiple instances when the sweeping melodies of the score felt out of sync with the storyline, which annoyed me (though this seems more like a storyline problem than a sound problem).

Here's where we see some major improvement from season 1. I don't think I've ever encountered such unique, interesting, and deeply realistic characters.

You've got our main character, Atsushi, who struggles to let go of the pity he feels towards how helpless he was in his past, but who makes every effort to be a genuinely good person. Then there's Kunikida, whose openness regarding his struggle to manifest his idealistic worldview (which also happens to be his ability, quite literally) makes him one of the kindest characters I've encountered, albeit rigidly pragmatic.

And then of course there's Dazai, our favorite mysterious, mischevious, morally-gray shadow king. His role in season 1 seems to be purely comedic, but Dazai proves to be the center of gravity for literally every plot point in season 2. Learning about his past experiences in the Port Mafia and his deeply depressive struggle to find meaning in his lonely existence makes Bungou Stray Dogs one of the most mature shows I've seen to date.

But none of this is obvious - you have to do a little digging. Once you do, you'll realize our main character - Atsushi - and his rival - Akutagawa - actually represent the two sides of their mentor, Dazai. Atsushi represents the part of Dazai nurtured by Oda, which aspires to do good. Akutagawa, on the other hand, embodies Dazai's Dark Era, when he lacked any sense of righteousness and killed indiscriminately. Things get more interesting upon learning that while Dazai shows Atsushi patience and compassion, he repeatedly manipulates and abuses Akutagawa.

Yes, Dazai is stupidly suicidal and the show somehow turns that into a genuinely comedic idiosyncracy. But by season 2, it's obvious Dazai could easily have killed himself by now if he really wanted to. To Dazai, living is unbearable and something he genuinely wants to escape. But it is the part of him that desperately desires to find a reason to live that leads him to foil his suicide attempts every single time. The tension between Atsushi and Akutagawa embodies, in part, Dazai's own struggle to reckon with his past motivations for living while still part of the Port Mafia. And it's a struggle that feels remarkably human.

Couple all that analysis with the fact that each character is named for a famous Japanese (or American) author and you have a whole additional layer of depth to consider (for starters, real-life Dazai died by double suicide), though I wish the original author took this symbolism a bit more seriously. The best part is that there is still so much room for character growth, development, and exploration, especially considering how little we still know about Dazai. Season 3 has a LOT it could deliver on and I couldn't be more stoked.

Bungou Stray Dogs is one of the most polarizing and underrated anime out there, with mature themes and complex, realistic characters who stick with you over time. You'll either love it or hate it. If you would rather piece together character development than feel wowed by an epic storyline, then this is the anime for you. Otherwise, consider passing.

Obviously not commenting on the storyline nor characters  at this point .

But the first episode starts of with past dazai from when he was in the port mafia .... good action and comedy from dazai side

Animation and sound just like the first season  ( amazing )

The story for me was lacking, even though there were some interesting reveals in the first episodes of the season. I didn't like the fact that season 1 opened and closed with so many misteries and questions, and I sincerely though everything was going to be cleared up in season 2 but I was dissapointed. As I said earlier, there were some early reveals in the season but it took almost 6 episodes to get me a little bit hang up on the story since they lost my attention with all the gloomy and insensitive scenes in the opnening episodes themselves.

There's little complain over the animaton of this season because they mantained the animation of season 1 for the most part and season one's animation was great all along.

The sound was lacking just like in season 1, fight scenes had little to know memorable sound and the scenes at the bar were really borring music wise.

The characters were not developed at all with the exception of Dazai and Sakunosuke. Secondary characters were rarely shown and most character development they tried to implement in this season felt like a whole lot of filler.

I think the idea of humans with strange abilities form a group to protect those who don't have them is overused, but I have never doubted that there have been many shows that excelled in bringing this concept to fruition. So anytime a show with this synopsis comes out, I will try and give it a chance. Sadly, Bungou Stray Dogs dissapointed me a little, I really don´t know if they were saving story material for later seasons of for fans to move to it's source matewrial (Manga/Light Novel) but I personally dispised that. BONES didn't dissapoint with the animation, but the Bungou Project is long dead for me because they failed at the most important point in an anime series "Atratcting the viewer". Attracting the viewer means that whwenever you finish watching one episode, you imediately want to watch the next one, and then the next one and so on until you finish it. Shows that excell at this have people loving their stories, memorable characters are born from this shows and Bungou Stray Dogs was defenitely not in that group.

Hope you liked my first review ever in AnimePlanet.

The ratings are for the first 4 episodes. Trust me they are amazing. But after the first four episodes the show starts to be a cringey love type anime. With the mc being useless. I only watched till the 5th episode and oh boy did the 5th episode crush my heart. The 5th episode was so poorly written that I literally dropped this anime. This anime likes to drop characters on you and then later on explain who they are.  Now in the 5th episode this is poorly done. It cuts to some car crash with some vampier lookin guy and a farmer? Well the rest is spoilers for the 5th episode. Kyouka was sitting down and talking to Atsushi. Then he suggested that they learn about her phone so that she could use her power. Then some random *** ***** shows up and stabs Astushi. She tries to take Kyouka away but then Kyouka fights back. When they are fighting Kenji and (I really don't know what this dudes name is) ran up to Astushi. They I guess "helped" him. After that the farmer and vampire show up. (Am pretty sure its a vampire and a farmer because they are dressed like one.) They say "my package is here". After that I got mind ****** because like 6 people dropped and "killed" everyone. (nobody was acctually killed). Well they take the girl who attacked Kyouka and put her in a bed to rest. (EVEN THO SHE IS THE ******* ENEMIE). She wakes up and then we find out that she is the sister of Osamu. She askes where is Kyouka and Astushi says that she is missing. Then Astushi decides that he has big balls and threatens her. (EVEN THO SHE COULD ******* KILL HIM)

You know what? Watch this anime your self. The first 4 episodes were amazing but the fith damn it was ****.

Interesting decision, having the season start with a flash back 4 years before the events of the 1st season, not nescessarily bad, but not good either.

Story: Essentially 2 stories, first 4 episodes is before season 1, the rest after.

Characters: The cast is the same, new characters don't get nearly enough screen time nor developement.